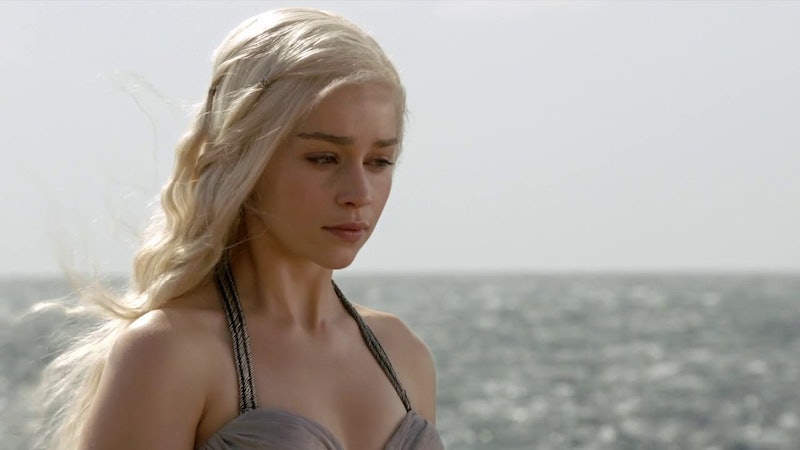 While fans wish all the best for all the non-evil characters in the Game of Thrones series, we are all aware that some of them have to die, or experience other such terrible fates. My belated Christmas wish for Season 6, though, is that this does not happen to Daenerys Targareryn in Game of Thrones Season 6 — and that she will instead cast aside her troubles and become even more of a baller than she already is. I mean, things aren't going so hot for my other favorites: Jon Snow is dead, Arya is blind, there's a lot of strife in Westeros and the surrounding territories. But, when it comes to the Mother of Dragons, her fate is up in the air right now, surrounded by a Dothraki army of her late hubby Khal Drogo's pals. After all the pain and heartbreak, the least the show can do is give me this! I hope more than anything — praying to George R. R. Martin himself, that Daenerys continues to stay "A1 since Day 1" when Season 6 commences.

If you don't remember much about Daenerys' current situation as we left off in Season 5, don't worry — there are so many characters on Game of Thrones and a lot of story lines to remember. (I suggest flashcards with magazine cutouts for Season 6 viewing parties.) Good news, in honor of the show's impending premiere, we're just going to have ourselves a nice little recap now. The following is what Dany got herself into Season 5 and what brought her on the wings of her dragon baby, Drogon, to a very remote grassland which, if not the Dothraki Sea, sure had a whole bunch of them on horseback.

It all started when Danaerys and Tyrion Lannister finally met, in what may be my most favorite combination of characters hanging out in Game of Thrones. She agrees to let him live with her and serve her, thus commencing the best power couple ever Westeros has ever seen! (Jorah is involved too, but mostly he's just whine-y and banned again, and then he decides to fight for his queen in the fighting pits of Mereen. Because that makes sense.)

Daenerys and her woes Tyrion, Missandei, Daario and Hizdahr Zo Loraq head out to Daznak's Pit to oversee the beginning of the season. There, two surprises wait for them: One, Jorah Mormont, the previously shunned advisor, is one of the fighters in the pit. He continues with the suprises when he spears some guy who's standing behind Daenerys waiting to stab her.

But unfortunately, the attempted regicide isn't an isolated incident. It turns out the Sons of the Harpy (the underground group of former Mereen slavemasters who do not like Daenerys' slave-free city), are hiding in plain sight. The Sons kill a great many audience members and guard. They slaughter Hizdahr, the former slaver who's betrothal to Daenerys had previously kept them at bay. When they sealed the exits, the rest of the crew finds themselves stuck in the center of the ring, waiting to die.

But not so fast, Sons of the Harpy! Because Drogon, one of Daenerys' dragon babies (who had previously escaped from his Mereen cage and been hidden from his mama) is here to save the day! He sets fire to quite a few Sons of the Harpy — and when Daenerys jumps on his back and orders him to fly, he does just that!

When mother and son finally touch down at his lair, Daenerys tried her best to get him to return and help her save her entourage, but the lil' guy was not having it. So instead, he takes an nap and she heads out to find food. Then, she gets circled by a large pack of Dothraki and drops her ring on the ground... possibly as a breadcrumb trail for her people to find her?

In Mereen, Daario (Dany's lover) and Jorah are ready and willing to go search for Daenerys and find that trail she left. Meanwhile, Tyrion is taking over Mereen, and for some reason Varys is suddenly back in the picture trying to give him bad advice.

Will Tyrion take the bad advice and make it difficult for Daenerys' return (I hope not I ship them so hard)? Will Daario and Jorah survive the quest to find her? Will she make the Dothraki bow to her once again with her regalness and quiet intensity?

While I don't know these answers, what I do know is that the actor who plays Daenerys, Emilia Clarke dropped some knowledge about the upcoming season in an interview with the Los Angeles Times: