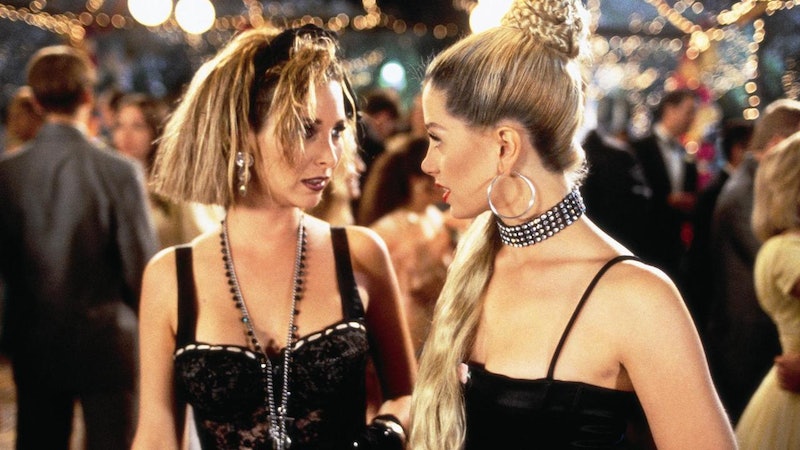 While there are plenty of '90s teen movies about female friendships, if you ask model Gigi Hadid about the '90s equivalent of Taylor Swift's girl gang, you might think otherwise. Victoria's Secret's newest addition told Who What Wear last summer of the era that was (until now) largely considered the last great era of supermodel-dom, "The pictures of them backstage together, are so iconic and it's really cool now that I feel there's a group of girls again that are gonna create that. Like the whole 'squad goals' thing is a very big thing right now. I feel like as models, we're kind of getting to experience what they did. [But] we want to be known as the group of girls that are known for our kindness, rather than our cattiness."

Indeed, 2015 was a big one for female friendships, thanks in part to her majesty Swift and the 26-year-old's band of besties, who traipsed around the world together with nary a tabloid report of intra-crew catfighting. Instead, Tay's been vocal about her interest in sharing her success with the women closest to her, telling Esquire in 2014, “What does seem possible and easy and comfortable is having this entire league of incredible girlfriends that I have. And I can trust them, and the reason I know I can trust them is because nothing true about me is being written in the press right now.”

In honor of #squadgoals of all generations, here are the greatest films from the '90s, one from each year, that contended with the complexity of female friendships. (Plus, a bonus from 2000 — but when you see which one it is you'll understand why it had to be on this list.)

See that woman right there? That's my mother and when I grow up... I want to be just like yours.

What I wouldn't give to watch another 110 minutes of Cher, Winona Ryder and Christina Ricci bonding over the opposite sex in 2016.

You said you and me was gonna get outta town and, for once, just really let our hair down. Well, darlin', look out, 'cause my hair is comin' down!

I reject the notion in this Atlantic piece that this was the last great movie about women. No way are we stuck in 1991 in any way beyond our occasional recycling of its fashion.

...And what am I supposed to do, huh? Go back to taxi dancin'? Ten cents so some slob can sweat gin all over me? I'm never doin' that again! So you go back there and you tell ol' rich Mr. Old Chocolate Man that he ain't closing me down!

Do you think we could re-break the Internet if we petitioned Madonna, Rosie O'Donnell, Geena Davis and Tom Hanks to reprise their roles for a group Halloween costume this year? I think we could do it.

It was an old tradition. Only the most dutiful of daughters would put her own flesh in a soup to save her mother's life. My mother did this with her whole heart even though my grandmother had disowned her. This is how a daughter honors her mother. The pain of the flesh is nothing. The pain you must forget. This is the most important sacrifice a daughter can make for her mother.

The film, in case you forgot, was adapted from the Amy Tan novel of the same name, which follows a group of four women who emigrated from their native China to give their children a better life in America. Totally brilliant, and totally worth reading the book for, if you haven't already.

This girl gang has more girl power than a Shonda Rhimes script!

This is where Dionne lives. She's my friend because we both know what it's like for people to be jealous of us.

The friendship between Cher and Dionne is still #goals.

Because as far as witch crews go, this one's the coolest.

Well, you know what? There are worse things than telling some dumb story and vain everybody laugh at you. [...] Like losing your best friend. I had the worst dream, Romy. I dreamt that we weren't friends. And we were really, really old. But I mean we were like, really, really old. And... And we weren't friends. I can't stand that we're mad at each other. Okay, I'm sorry I said all those things. You're as cute as me. You are. And in some cultures, maybe cuter.

Is there any truer sign of friendship than owning matching pleather?

Here's the deal, Mom. We thought it over, and we decided we're being totally gypped. Dad promised we'd go on our camping trip. And we want to go... together.

Sisters or not, these long lost twins had the partners-in-crime game down pat.

And so, dear Lord, it is with deep sadness that we turn over to you this young woman, whose dream to ride on a giant swan resulted in her death. Maybe it is your way of telling us... to buy American.

Ignore everyone but Amber Atkins in this movie, and it's still inspirational.

The uncontested OG masters of the lady assassin genre circa '76. When this reboot hit theaters in the fall after the Y2K scare died down, every '90s girl was like, "What two friends am I gonna dress up with for Halloween and how easily can I convince one of them to hold the boombox so we can play "Independent Women Pt. 1" by Destiny's Child everywhere we go?"

Who else is down for a movie marathon right about now?