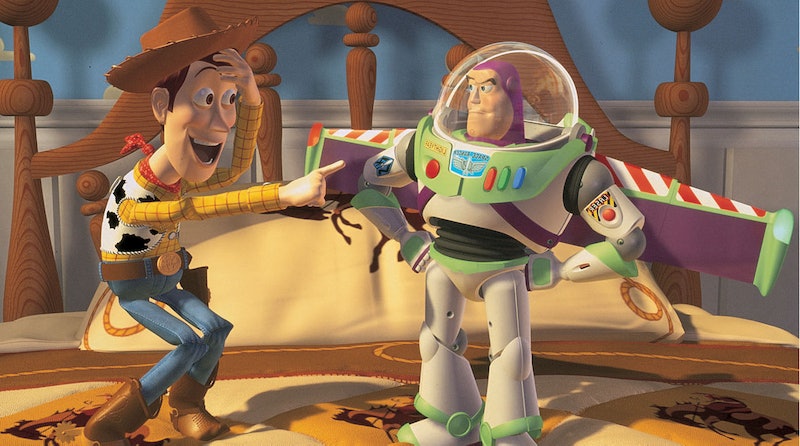 Oh, the '90s, a millennial's favorite decade of nostalgia, also known as the decade that produced The Backstreet Boys, Britney Spears and Friends. Of course, the '90s didn't just give iconic pop artists and television shows, though, really, that would have been more than enough. The decade also was responsible for movies — lots and lots of movies. Some '90s movies were memorable, albeit not always for the right reasons (Batman & Robin), while others were doomed to be forgotten (Battlefield Earth), and still more lost to modern audiences for all their '90s flair.

Of course, movies in the decade also broke new ground in Hollywood. Tom Hanks won the Oscar for Best Actor in a Leading Role two years in a row — in 1994 for Philadelphia and 1995 for Forrest Gump — and James Cameron made box office history with his epic blockbuster, Titanic (1997). But critical acclaim and box office records aren't what make a movie memorable, and they certainly don't guarantee that a movie will be remembered as representative of a decade. No, that requires something else, a certain wow factor, or je ne sais quoi if you will, that makes a movie undeniably '90s. Here are 13 of the most memorable movies of the '90s.

Not only did Titanic dominate the box office when it was released in 1997, it also gave an entire world a new love story for the ages: Kate and Leo (or Rose and Jack if you wanna get super technical about it). It's been almost 20 years since Titanic's release, and many are still debating whether or not Jack could have fit on that plank of wood.

All I can say about this movie being on the list of most memorable '90s films is: Duh!

Even people who have never seen Pulp Fiction know Pulp Fiction. From John Travolta's dance moves to Uma Thurman getting stabbed with adrenaline to Samuel L. Jackson's love of fast food, there's very little from this movie that hasn't been incorporated in pop culture, making it inescapable.

Schindler's List was always guaranteed to be legendary. And it's clear, given its recent mention by Republican candidate Jim Gilmore at the Republican Jewish Coalition forum, that the movie is still one of the most well-done representations of Jewish history in film history.

Home Alone is practically required viewing for any kid born after 1980. And the film's popularity has shown no signs of slowing down.

The Lion King, aka the Disney movie that will make even the most heartless viewer cry like a baby, reigned supreme as the best modern Disney animated film for over 15 years before it was beat by Frozen.

Space Jam is no masterpiece, and Michael Jordan is no great actor, but, whether you like it or just love to hate it, there's no question that Space Jam is still one of the most talked about movies of the '90s.

Why Se7en and not Fight Club (1999), you ask? Well, for one thing, Brad Pitt is super fine as a detective trying to catch a serial killer, and, for another, Se7en gave moviegoers one of the greatest gifts of all time: What's in the box?!

Toy Story changed the game for animated movies when it was released in 1995, and Pixar films have only gotten stronger since their feature length debut. Still, no matter how many more masterpieces Pixar comes up with, none will be as great as the movie that started it all.

Scream, the slasher flick to end all slasher flicks, starred Rose McGowan, David Arquette, Courteney Cox, Matthew Lillard, and Neve Campbell with bangs. Could it be any more '90s?

Robin Williams made us laugh while also giving us all nightmares in Mrs. Doubtfire. It's one of the comedian's most beloved roles and a classic '90s family comedy. In short: iconic.

"I see dead people." Try avoiding that sentence for the rest of your life and afterlife, I dare you.

This movie has everything you could ever want in a '90s teen movie: sketchers, Prada backpacks, crop tops, chokers, Gabrielle Union, Julia Stiles, and (arguably) peak Heath Ledger.