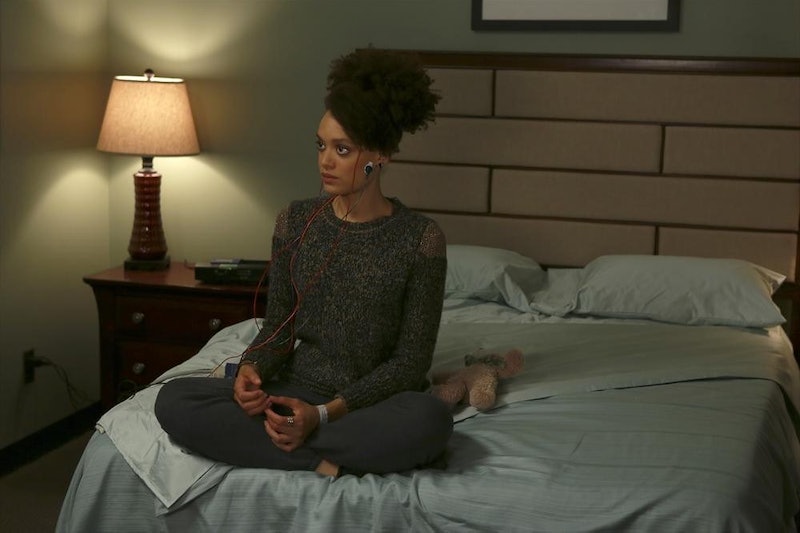 Welcome back to Ravenswood, where everyone is miserable and no one is safe. This week, Miranda is sad that she can't hang out with the other members of the pack and chase down evil scarecrows and get almost stabbed in the eye by Remy. She wants to break the jar of her hair and release her spirit into the world. (Personally, I'd rather stay nice and safe in the house I am haunting.) Caleb heads to Miranda's Uncle Collins and threatens him into releasing the jar.

Remy meets with a psychiatrist to talk about her sleep issues. It turns out that this wasn't the first time that Remy dealt with scary stuff in her dreams — Remy had terrifying nightmares when she was a child that are very reminiscent of the dreams she is having now. At the sleep clinic, Remy has a dream of her childhood bedroom where she sees an evil man with the three-sided knife lunge at her childhood self.

Olivia and Tess go to Springer's hospital bed (nice aim with that car, Tess). Before they can find Springer, they run into Springer's mother, who accuses Olivia and her family of ruining other people's lives. It turns out that Olivia's father put Springer's dad in prison during his time as a lawyer. Olivia sneaks into Springer's room and finds a recording on his phone that proves that Springer planted the knife at Olivia's house. (Is it just me, or is it WAY too easy to frame people for murder in this town?) When Springer wakes up, he confesses to Olivia that it was her boyfriend, Dillon, who made him plant the knife.

Later at the sleep clinic, Remy has a dream where she IS her childhood self (awkward nightie and teddy bear and all). In this version of the dream, Remy sees a terrifying clown. Though she insists that she doesn't have the "scared-of-clowns-gene," that's not really the issue — it's all a distraction so that the man with the knife can distract her. Why? So he can treat her to tea and threaten her life, in that order.

Thankfully, Miranda is now free of Collins' grip and can fight evil where the rest of the teens cannot. Miranda sneaks into Remy's dream and smashes the man with the knife (I have no idea what to call him, so we're going to keep going with that) on the head with a lamp. Remy wakes up, safe, and Miranda takes the man with the knife (whom she affectionately calls a "son of a bitch," because apparently that's now okay on ABC Family shows) into the black hole within the dreamscape.

Burning questions I have for next week:

-What side is Collins really on? Does he want to protect Olivia and Luke's mother? Does he have a plan for Miranda?

-Will Miranda ever cross over to the other side, or, better yet, somehow reconnect with her human form?

-Are we really supposed to buy that Dillon is our main villain here when he's only gotten eight minutes, total, of screen time this whole season?

-Where does Olivia buy her clothes?

Until next week, friends!