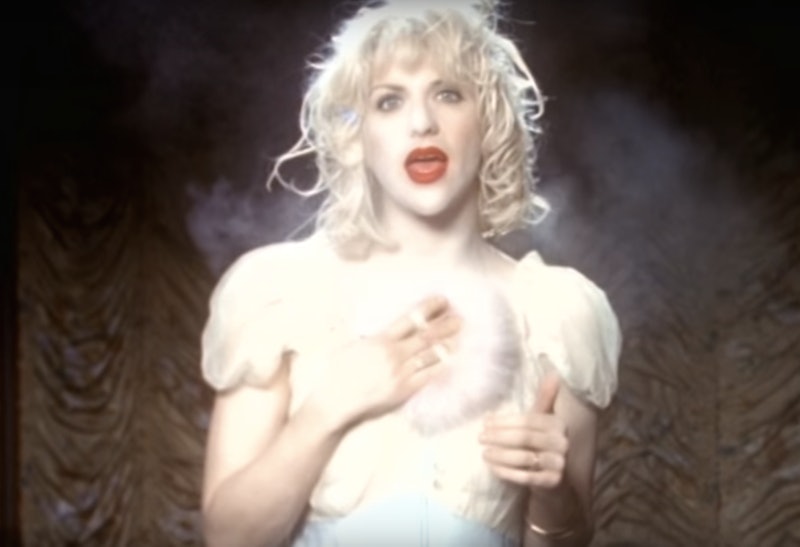 The '90s were amazing for so many reasons, and one of them was definitely the caliber of female singer-songwriters that came out of that decade. I spent my teenage years obsessed with artists like Alanis Morissette and Jewel and Fiona Apple. While in modern times there are a fair share of fierce feminist artists, nothing can compete with '90s feminist musicians. In high school, angrily singing along to lyrics that seemed to sum up my life got me through so many difficult times, and it's those classic songs I go back to again and again. Sure, I love modern feminist musicians as much as the next person, but sometimes you need a song with more force and more vitriol — that's when you know you've got to return to your favorite '90s hits.

While every famous woman is now asked in every interview whether they call themselves a feminist, in the '90s, it was an unspoken rule amongst singer-songwriters. If a person wrote songs about things they believed in, wore whatever they wanted, and refused to put up with BS, they were embodying feminism loud and proud. The '90s gave us a plethora of songs that were some of the most feminist ever:

Performing in front a sign which says "cleanliness is next to godliness," Hole created a total feminist anthem with "Miss World." Taken from the band's 1994 album Live Through This, "Miss World" examines body image, substance abuse, and what it means to be a woman in a vanity-obsessed world. Tim Grierson, in a review of the album on About.com, says, "Male rock stars rarely have to worry about their attractiveness to their audience, but Courtney Love understands that she’s not so lucky, and 'Miss World' exposes that double standard."

2. "You Oughta Know" By Alanis Morissette

No list examining feminist hits of the '90s would be complete without a Morissette track from Jagged Little Pill. "You Oughta Know" is completely iconic, and perhaps one of the most well-known break-up anthems of all time. Morissette avoids clichés in the song, which serves as a letter to an ex, and what could've easily become a self-pitying track is instead a totally fierce rebuttal. Instead of accepting the way she's been treated, Morissette voices every complaint. When she says, "The joke that you made in the bed that was me, and I'm not going to fade as soon as you close your eyes," she's documenting her side of the story. In a totally feminist move, Morissette reminds the world that, contrary to popular belief, not every woman curls up into a ball and cries when something bad happens.

Exile In Guyville is one of the best '90s albums, like, ever. Liz Phair is always outspoken, and "F*ck And Run" is no exception.

When Gwen Stefani sings the refrain, "Oh, I've had it up to here," it's clear that "Just A Girl" is the perfect antidote to the patriarchy.

5. "If It Makes You Happy" By Sheryl Crow

Even the video for "If It Makes You Happy" is amaze. Sheryl Crow is an exhibit in a glass box in The Natural History Museum, being admired and examined by strangers — making it even more satisfying when Crow sings, "I'm not the kind of girl you take home." Women in particular are often scrutinized for their choices, and it's important to have an anthem which opposes that.

There are approximately about 100 PJ Harvey songs that could've made this list. "Man-Size," from Harvey's album Rid Of Me, is completely ferocious.

7. "Silent All These Years" By Tori Amos

Tori Amos is the epitome of '90s feminist singer-songwriter, and "Silent All These Years" is one of the many incredible songs she's written: "Sometimes I hear my voice, and it's been here, silent all these years."

Jewel continues to be a feminist role-model with most recent album, Picking Up The Pieces , but in the '90s, it was Pieces Of You and Spirit that I had on repeat. "Down So Long," from Jewel's second album Spirit, is about picking yourself back up when you're at rock bottom, and understanding that no one can save you but you.

Basically, the '90s were an iconic decade when it came to empowering women who were unafraid to use their voices and songwriting abilities to inspire others.

More like this
The 'Kenan & Kel' Reunion On 'SNL' Took A Dramatic Turn, Thanks To Keke Palmer
By Brad Witter
The First Trailer For 'That '90s Show' Includes So Many Nods To The Original Series
By Jack Irvin, Alyssa Lapid and Grace Wehniainen
Shania Twain Replaced Brad Pitt’s Name In “That Don’t Impress Me Much” At The PCAs
By Jake Viswanath
You’ve Been Singing The Wrong Lyrics To “All I Want For Christmas Is You”
By Sam Ramsden
Get Even More From Bustle — Sign Up For The Newsletter