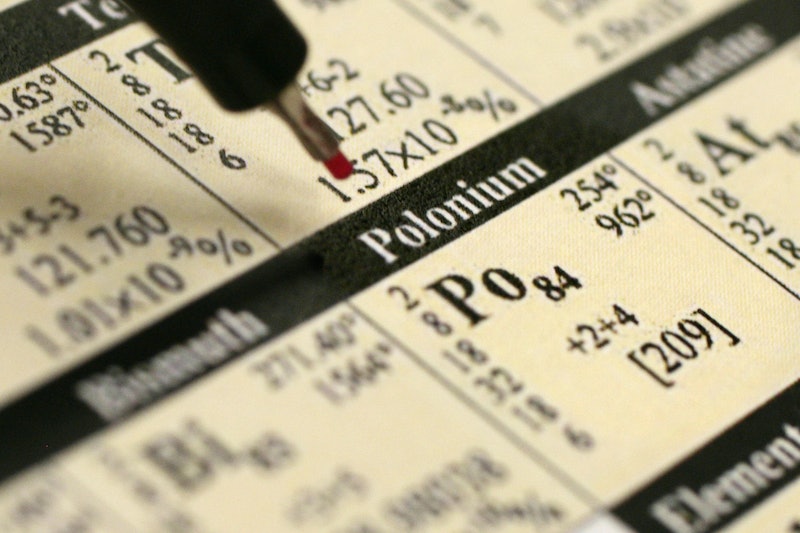 This New Year brings with it new elements to the periodic table. The global organization which oversees these sorts of chemical developments announced Monday that it has confirmed the discovery of four new elements — all synthetically produced in labs. Textbooks will need to be updated, but not before some new names are chosen — so here are some feminist suggestions that ought to be taken into consideration.

The International Union of Pure and Applied Chemistry, based in Switzerland but with administrative offices in North Carolina, approved the research, which was done by American, Japanese, and Russian scientists. If you discover an element, you get to name it. That means that the groups of scientists get to propose permanent names and symbols. If you can remember back to chemistry class, each element has an atomic number — the number of protons in it. The Japanese team found 113, and the American-Russian joint team discovered 115, 117, and 118.

Elements 114 and 116 were added back in 2011, and they are called Flerovium and Livermorium respectively. They were named after research facilities used to develop the elements. The American-Russian team at the Joint Institute for Nuclear Research in Dubna and Lawrence Livermore National Laboratory in California discovered them too, so this kind of thinking might carry through with their naming of 115, 117, and 118.

Elements can be named after a mythological concept, a mineral, a place or country, a property, or a scientist, according to the IUPAC. Any proposed name will be checked out for consistency, prior use for other cases, and translatability into other languages. Of the current elements, only two were named after women: Meitnerium and Curium, named after Lise Meitner and Marie Curie, respectively. Curie shared her honor with her husband.

Amaterasu is the goddess of the sun and the universe in Japanese mythology and the Shinto religion. Starting with one of the most important female deities would seem like a great way for the Japanese team to go.

Ida Tacke was German chemist and physicist. She married another scientist, Walter Noddack, and the two discovered element 75 (rhenium). She was nominated for the Nobel Prize three times, but was never honored. She also was supposedly the first person to mention nuclear fission. She was way ahead of her times, so it's better late than never to give her her due.

A student of Marie Curie, Marguerite Perey was the first female to be elected to the French Académie des Sciences. Her big claim to fame was discovering element 87 (francium). Francium is highly radioactive, and Perey died of cancer in 1975.

Given the Russians' role in the the development of the other elements, it would be fitting to also honor someone from Russian-Slavic mythology. Morena is the goddess associated with death and rebirth in nature. Given that the element only survives for seconds in a lab, it is constantly dying, making her a perfect namesake.

The scientists don't have to follow these suggestions, but honoring women should be a focus, given that 14 men have already had elements named after them.