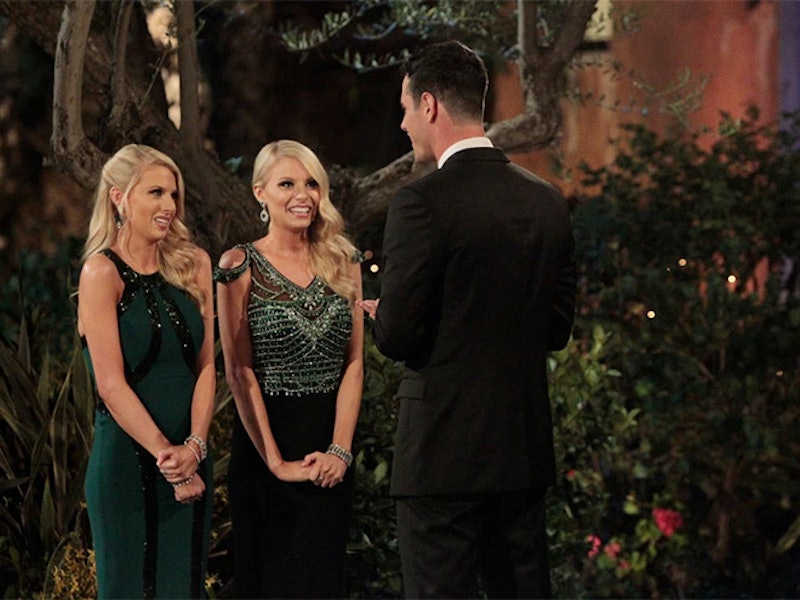 The moment I heard that we were going be seeing double on the new season of ABC's long-running dating show, I started wondering — how will The Bachelor twins' dates work? Emily and Haley Ferguson are 22-year old identical twins and Bachelor contestants from Las Vegas, where they work as cocktail waitresses, and now that they're both appearing on Ben Higgins' season of The Bachelor, they're fervent topics of conversation too. Hoo baby, I've got some questions right out of the gate.

One of them is how this even happened, which Chris Harrison took care of right off the bat, explaining in an interview with Yahoo :

They both watched Kaitlyn [Bristowe]’s season and really liked Ben. They discovered that they both wanted to apply for the show, so they both did. This was the first time they have fallen for the same guy, as they usually have differing tastes.

OK, that makes sense to me. But now let's get to the more important stuff, like how is this gonna work? Are they gonna go on dates together, or separately? It looks like they get out of the limo at the same time, so does that mean they're a unit? Like, would they be eliminated as one? There's a lot up-in-the-air as far as I'm concerned, so I'm relieved that Higgins went on Live! With Kelly and Michael on Jan. 4 to clear things up a little. After Kelly Ripa asked him whether he dated the twins together or as individuals, Higgins said:

Um, both. So, they both came on [together] to go through the journey, but they're amazing women, and you look at them individually once they got there. But I think — they came together. And like I said, they're incredible.

So what it sounds like to me is that they came as a unit, as kind of a gimmick — after all, in their bios, their occupations are listed as "Twin" — and then separated once they got there. I suspect that when Higgins says he dated them as both a unit and as individuals, it means there were some group dates that involve both ladies. I highly doubt he would take them on a one-on-one or a two-on-one date as if they were a single person — right? Please let me be right. Besides, pulling that twin twist doesn't feel like a very Ben vibe — Juan Pablo "Worst Bachelor Ever" Galavis, maybe, but not Ben "Sweet Baby Angel" Higgins.

I think at the end of the day, Ben was as blindsided by this twist as we were, and it sounds like he copes with it as best he can, getting to know these women as individuals, even though they arrived as a matched set.