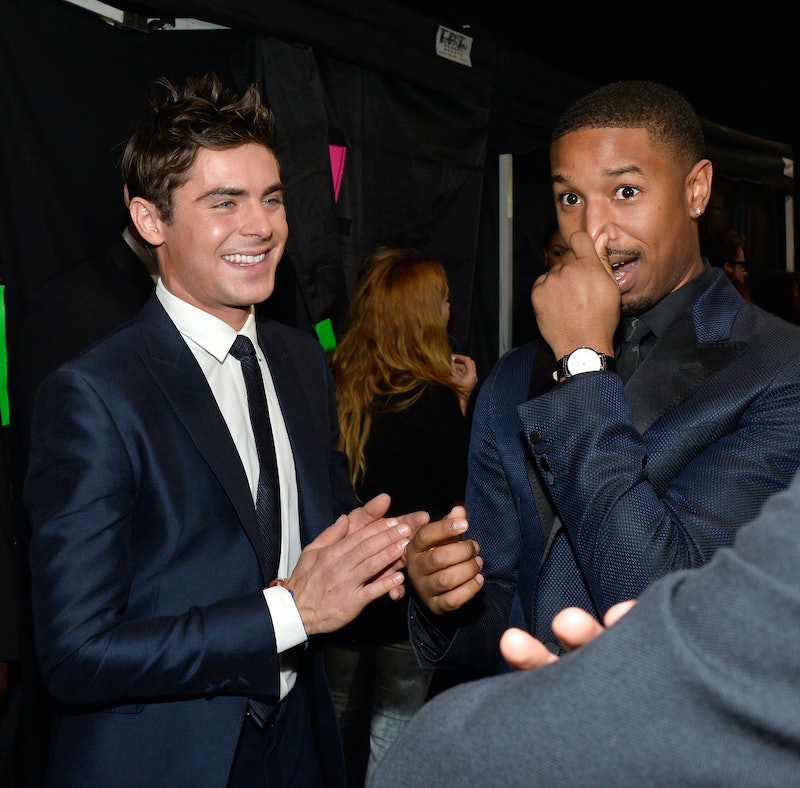 I knew the day would come eventually, but I just didn't think it would be this soon. For months — years, actually — I had gotten myself convinced that perfection was possible, that it existed in the form of one man, an actor I'd loved ever since he stepped onto the East Dillon football field in Friday Night Lights' Season 4 premiere. So when the truth came, I had no time to prepare, to process, to come to terms with the fact that no one, despite how they may seem, can actually be flawless. When Tuesday I read Michael B. Jordan's cringe-worthy, un-feminist answers to a Glamour interview, I found myself in shock — and seeing my once-untarnished opinion of the actor forever changed.

It all started with a simple enough premise. Glamour, in honor of That Awkward Moment , a new romantic comedy starring Miles Teller, Zac Efron, and Jordan, asked the three men to share their feelings on dating, sex, and love. Teller and Efron, realizing that a) it was a Valentine's Day-themed interview for Glamour and b) they were there to promote their movie, not share their deepest secrets, answered each question exactly as they should — lightly, jokingly, charmingly (Efron: "I think every single girl has something different and special about her").

Jordan, though, didn't seem to get the memo. He answered each question with total honesty, and, in the process, revealed a side of himself no female fan ever wanted to see.

Glamour: In the movie, your characters talk about “hitting the check boxes.” What are your dating check boxes?

Michael: I’ve got different lists depending on what I’m looking for. Is it the past-12-o’clock-in-the-morning list? Then my checklist is a little shorter.

"OK then," the interviewer understandably responded. Then there was this:

Glamour: OK then... and what’s on your list for the girls you want to date?

Michael: A sense of humor. And I want a woman who is comfortable in the kitchen. I’m old-school about stuff like that.

No. No, no, no, no. Once I got past the initial disappointment of realizing that I, a terrible cook who lives on Chinese take-out and frozen pizza, would never get to date Jordan, I switched over to anger. It's 2014, feminism has finally stopped being a dirty word, and Michael B. Jordan still thinks that all "dateable" girls must be good in the kitchen. He's not anti-feminist, though, just "old-school." Ugh.

That declaration wasn't enough, though. Jordan needed to rub salt into our wounds:

Glamour: Sometimes we girls need a manual to you guys. So let me ask you the eternal “are you going to respect me if we have sex on the first date?” question. Michael: No. No. Maybe...but a little less.

Oh, man. Jordan's stance on first-date sex is a complete double standard, one that says, how dare a woman want to have sex just as much as I do? Learning Jordan's take on the subject is frustrating and disheartening, especially when compared to his co-stars' answers to the same question. Teller: "Yes... I will;" Efron: "Sex is a beautiful thing. I don't object."

A day after first reading the interview, I'm still coming to terms with Jordan's apparent anti-feminism. It's a similar, albeit much less extreme, example of the Woody Allen debate: what do you do when you love an artist's work, but can't stand them as a person? Jordan, who has starred on two of my favorite shows, Friday Night Lights and Parenthood, as well as in one of the most powerful movies of 2013, Fruitvale Station, is one of my favorite actors. I'm thrilled that he's finally getting noticed by Hollywood, and I truly do hope that his star continues to rise over the next couple of years, yet I can't get his interview answers out of my head.

Sure, they're not the worst things an actor's ever said, but they are disappointing. They show a side of Jordan I didn't previously know existed. Now that I know, though, I can't forget it. Jordan's stance on feminism will forever color my opinion of him. Already, his elevated status has started to fade; knowing that he requires dates to make sandwiches and keep their legs closed suddenly makes him seem a lot less attractive.