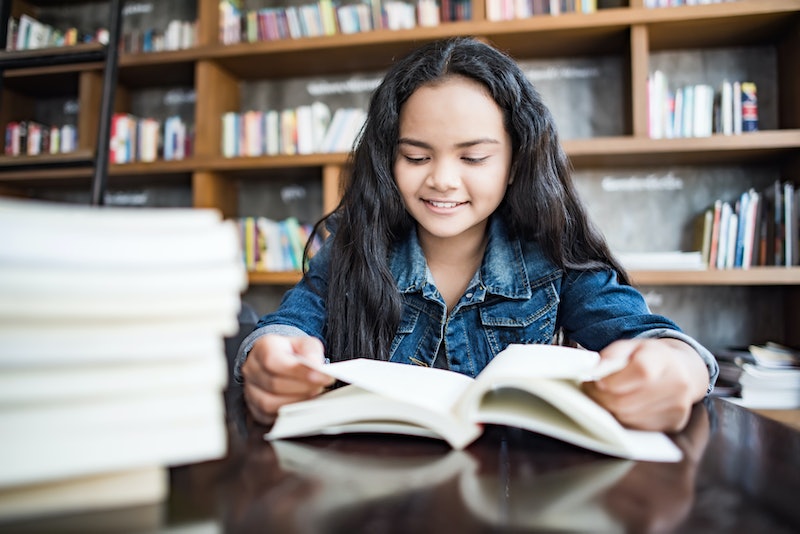 Remember all those must-have ‘em Saddle Club books by Bonnie Bryant that totally ruled your world as a kid? They were basically the horse-themed books that defined your childhood, if you recall. It’s often said that reading is the best way to experience those things in life you might not otherwise be able to — exotic travel, high-risk adventure, being a member of the Kennedy family — and in my personal case as a young’un, horseback riding.

Growing up I loved the idea of horses. They were wild and mysterious, they had amazing hair, Pocahontas looked like a total badass riding one. But get me within five feet of the things in real life, and I was toast. Once, at the only day camp I ever attended as a child, I spent a very long and painful 25 minutes astride what was possibly the oldest, tamest, (and in my opinion, most terrifying) horse that ever lived. There was nothing that could convince me otherwise. If my instructor had allowed me to give up the moment I put my foot in the stirrup, it’s likely that to this day I would have still never attempted to sit atop a horse again.

Be that as it may, I love reading about many an experience that I wouldn’t never actually touch with a ten-foot pole in real life — this is the very best part of being a total book nerd, after all. Here are nine Saddle Club books that totally ruled your world as a kid.

I definitely remember the heart-palpitating excitement of that first boy-girl party I ever attended. And yes, it was everything I'd dreamed and more. (All subsequent boy-girl parties are another story.) In Hay Ride , the gals of The Saddle Club are planning a dreamy boy-girl party for Carole's birthday, complete with a moonlight hay ride. That, plus one very mean girl intent on stealing everyone's boyfriends equaled novel gold when you were young.

In this Saddle Club classic, Horsenapped , Carole, Lisa, and Stevie find themselves in the middle of a real-life mystery when mean-girl Veronica (see boyfriend thief above) and her horse Garnet go missing after a particularly unsuccessful riding performance. When the girls find a $10,000 ransom note in Garnet's empty stall, the drama really heats up. Of course, these three gal pals and their horses totally save the day.

Basically The Babysitters Club (your other YA-series obsession) only better, because instead of small children, there are horses. Horse-Sitters really should have been a series all its own. (Still waiting.)

Boys and horses, horses and boys... that's really all there is to being a young adult sometimes, amirite? In High Horse , the pals take their annual overnight trail ride with Stevie's boyfriend Phil in tow. (Seriously, all the squeals.) Although their relationship seems a little touch-and-go for a moment, Saddle Club No. 33 definitely doesn't disappoint.

Growing up I didn't have any brothers, but from what I gathered from friends, they tended to be kind of a handful. Stevie's brothers are no different — although Stevie definitely torments her siblings as much as they tease her. But after reading Chocolate Horse , when Stevie's brother Alex becomes seriously ill, and she has to face what life would be like without her wacky brothers, you probably had a renewed appreciation for your own siblings too.

Who doesn't love a good frenemy story? By the time you reached Saddle Club No. 65, aka: right around the third grade, you'd probably already had your first run-in with one over the Crayola box. In Silver Stirrups Carole deals with a frenemy of her own, and totally makes peace by the end. Definitely inspiring to your 1997 self.

From the first grade all the way through fourth, every year I had the poor luck of having one BFF after another move away. (And subsequently, I went through a lot of friendship bracelets.) So I totally nursed my sorrows with Wild Horses , in which The Saddle Club fears their best bud Lisa is moving away to boarding school forever.

I'm pretty sure every single Saddle Club super-fan ever was convinced they too had psychic powers, after reading about Stevie's clairvoyance-inducing head injury. Dream Horse plus a Ouija board were the dynamic duo of elementary school-era sleepovers.

Every YA series worth its ink has at least one holiday story special (my mother collected all of mine in a box and put them out only during the holiday season, making them extra exciting.) The Saddle Club's Christmas Treasure is filled with horses, holiday cheer, and tons of Secret Santa gift giving drama; and you know you loved it.