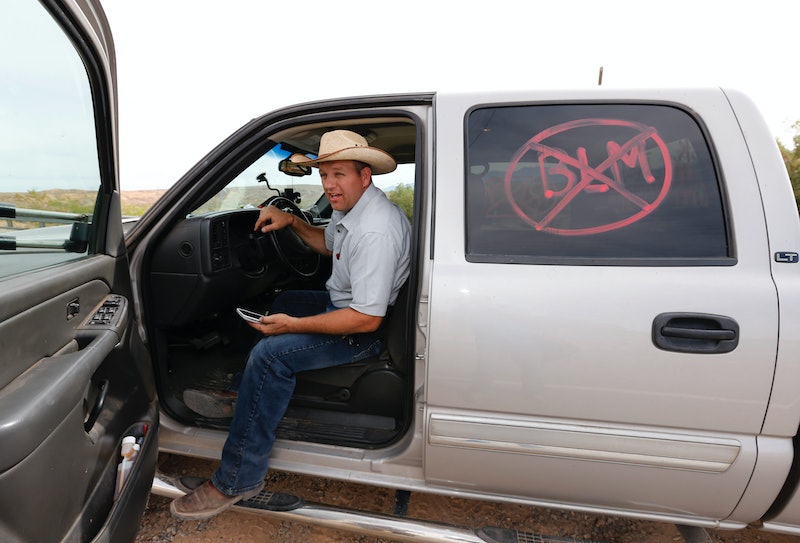 Since Saturday night, dozens of heavily armed people have been taking over the Malheur National Wildlife Refuge headquarters near Burns, Oregon, in a fight against government "tyranny." On Monday, leaders of the group held a press conference to outline the reason for their occupation, insisting that they are not making any demands, but merely defending the United States Constitution. In line with their mission, the Oregon group wants to be called Citizens For Constitutional Freedom. But what does that mean, and what exactly do they want if they're not making any demands?

Led by Ammon Bundy, the son of Cliven Bundy, who led his own standoff with the government in 2014 over grazing rights, the group of armed men have announced that they'll stay for as long as it takes to get what they want. During the press conference, Ammon announced that the group had chosen a name for themselves: "Citizens for Constitutional Freedom." Just as the name suggests, the group says that it aims to defend the U.S. Constitution and fight government tyranny, and is using its current protest to do so. Ammon's brother Ryan told NBC News:

We're here only to promote the Constitution, the supreme law of the land, and to help the people reestablish their rights.

But what exactly are they protesting?

The armed takeover stems from the cases of Dwight Hammond and his son Steven, who were both charged and sentenced to prison for arson after they set fire to land managed by the U.S. Bureau of Land Management (BLM). Under federal law, arson on federal land carries a minimum sentence of five years, but a judge ordered shorter sentences for the Hammonds, both of whom had finished serving their time. However, the federal government stepped in last October and resentenced the two to the mandatory five years. The Hammonds were due back in prison on Monday.

Though some members emphasized during the press conference that they're not making demands, Ryan told The Oregonian that the group specifically wants the Hammonds to walk free and for the government to relinquish its control of the Malheur National Forest, which was established as a national wildlife refuge in 1908 by President Theodore Roosevelt. On Monday, Ammon appeared on CBS This Morning to further explain:

The wildlife refuge has been a tool that government has used for many years to take the land and resources away from the people. The people of this county are being abused and they're being prosecuted because they're not willing to sell to the federal government, and it's just one of those things that just cannot continue.

Essentially, the Oregon militiamen argue that this is not what the Founding Fathers had in mind when they created the Property Clause in the U.S. Constitution. The clause gives Congress broad authority over how to manage federal land, and this is precisely what self-described patriots like the Bundys and their fellow protesters take issue with, thus taking on the goal of reinterpreting the Constitution. However, since the scope of the Property Clause has never been officially established, they might have a long battle ahead of them that will, hopefully, not turn violent.