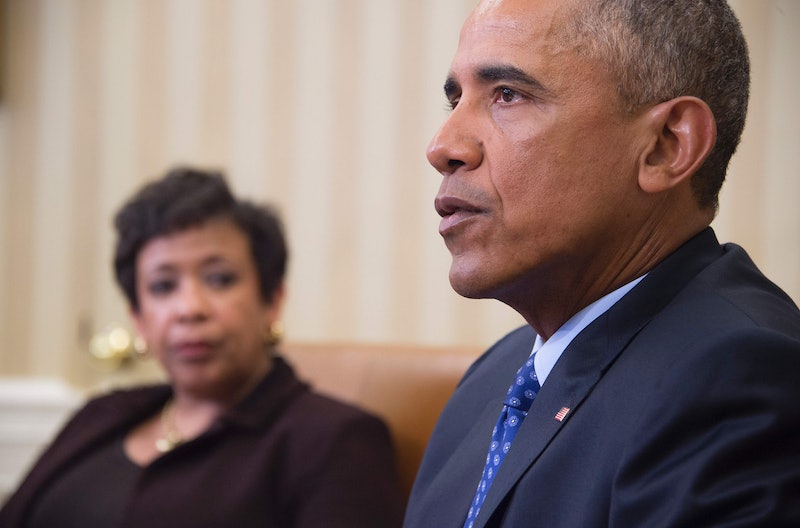 On Tuesday morning, President Obama released the details of the executive orders which constitute his latest attempt to reduce gun violence. Republicans, naturally, responded before Obama had even formally announced the proposal — not by proposing alternatives to his measures, but by calling him a dictator and accusing him of subverting the Constitution. While those claims are rooted only in blind outrage and not empirical reality, they do raise an important question: Can the GOP override Obama’s executive actions?

The short answer: In theory, yes, but in practice, probably not. Despite the current bout of hand-wringing on the right, executive orders are a standard tool in a president’s toolbox, and every single president has issued them. The only way for Congress to overturn one is to pass a law that overrides it. This has happened in the past, and it's not terribly complicated. In essence, Congress simply needs to pass a law implementing a policy that’s the opposite of whatever the executive order in question mandated (or alternatively, a law that strips funding for the proposed policy).

The problem, as you may suspect, is that the president can then just go ahead and veto whatever law Congress passes. Unless Congress can muster the two-thirds majority needed to override that veto, the legislative branch is out of luck, and the president’s orders will stand.

Republicans could take the legislative approach to overriding Obama’s actions on guns, but it’s doubtful that they'd be able to scrounge up 67 votes in the Senate to override a presidential veto. That’s simply because in this highly polarized political environment, it’s damn near impossible to get 67 senators to agree on anything, let alone something as controversial as gun control. The last time the Senate attempted to pass new gun regulations, the chamber split, in a 54-56 vote. In other words, neither side was anywhere close to getting 67 votes.

There’s another way Republicans could conceivably overrule Obama on this, and that’s by pressing a lawsuit. If the GOP sued the administration over these executive orders and emerged triumphant after the appellate process, they could succeed in thwarting them. But this, too, is a long shot. Only twice in U.S. history has the judiciary overturned a president’s executive orders.

There’s one last way that the GOP might override these executive orders: By winning the White House in 2016. President Cruz, for example, could easily issue his own executive orders undoing Obama’s executive orders. This sort of back-and-forth may sound petty, but it actually happens all the time.

The bottom line is that it’s pretty hard to get rid of an executive order. Unless the GOP builds a veto-proof majority in the Senate (which won’t happen), wins the White House (which probably won’t happen), or files a successful lawsuit against the Obama administration (which could happen, but is still unlikely), these orders are here to stay.