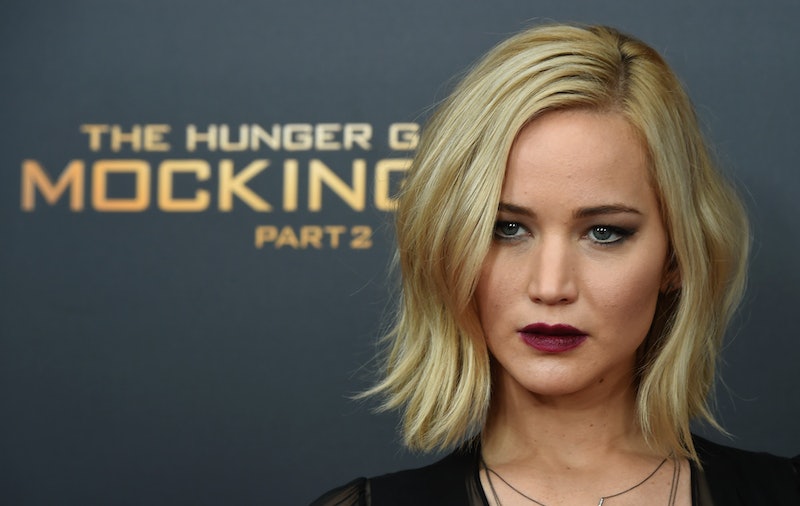 Jennifer Lawrence may have been named the highest paid actress in 2015 by Forbes, but she's proven again and again that she's a fierce advocate for shrinking the wage gap between men and women in Hollywood after the 2014 Sony hack revealed that she made considerably less than her male costars in American Hustle. Instead of keeping quiet on the issue for fear of ruining her bankability (and likability) as one of Hollywood's hottest young actors, Lawrence used the leak as an opportunity to speak out in a candid and honest way in an October 2015 essay in Lenny Letter about the wage gap. And, as we enter into 2016, Jennifer Lawrence has opened up to Glamour magazine for their February issue to continue the conversation.

Sure, one criticism could be that Lawrence is obviously much wealthier than the average woman, but her words resonate no matter what your career trajectory is. Glamour asked the actor how she decided to take a stand about the wage gap issue, and she made no qualms about her true feelings. She said,

It was so personal that it was scary... I keep going back and forth on being opinionated. I completely agree when there are actors who say, “Actors should stay out of politics. We’re not politicians.” [And] my business is based on everybody buying tickets and seeing my movie… It’s not smart, business wise, to be opinionated. But then what’s the point in having a voice at all if I’m not going to use it for what I truly believe in?

The 25-year-old then gave some seriously sound advice about how she felt when her salary information was revealed to the world in the hack, saying:

The women’s pay gap is a real thing that a lot of people don’t know about. It hasn’t been in our consciousness; it wasn’t in mine. I don’t think it was Sony’s fault [that I was paid less than my male costars in American Hustle]. I don’t think it was anybody’s fault. I wanted to open up about how my mentality got in my way.

Glamour asked if Lawrence was mad at Sony for paying her less, and Lawrence said she wasn't:

Sony’s a business. You’re not gonna give somebody more money if they don’t ask for it. They’ve got to fit a million movie stars into one movie. They’re trying to realistically make this happen. You know, [after the Lenny essay came out] my agent was like, “God, I feel like I look like a terrible agent.” Well, no, because you have to do everything I say. And I said, “Settle.” 'Cause I just wanted to do [Hustle]; it wasn’t about money to me at the time. But all the actors were doing that. None of us were getting our [usual] quotes. But the difference in who was getting a little less, and a lot less, than their quote was very vast. And I wanted to write about how I got in my own way. 'Cause I assume that in negotiating, the men were tough as balls.

Her remarks about production companies being a business trying to make money are spot-on, and they certainly have the means to pay their workers equally, regardless of gender. These are tough waters to navigate, and that's true for anyone working for any type of business, not just a major film production company. But the important takeaway from all of this remains: You could be completely deserving of a raise or promotion, but until businesses start putting what's fair above what's profitable, you're not going to get it unless you ask for it. Even if you're the biggest movie star in the world, like J. Law is. If there's one New Year's resolution worth making (and sticking to!) it's this: Ask for what you deserve. Do your research, go in armed with the facts, and keep the spirit of J. Law on your shoulder while you're doing it. You won't know until you ask!