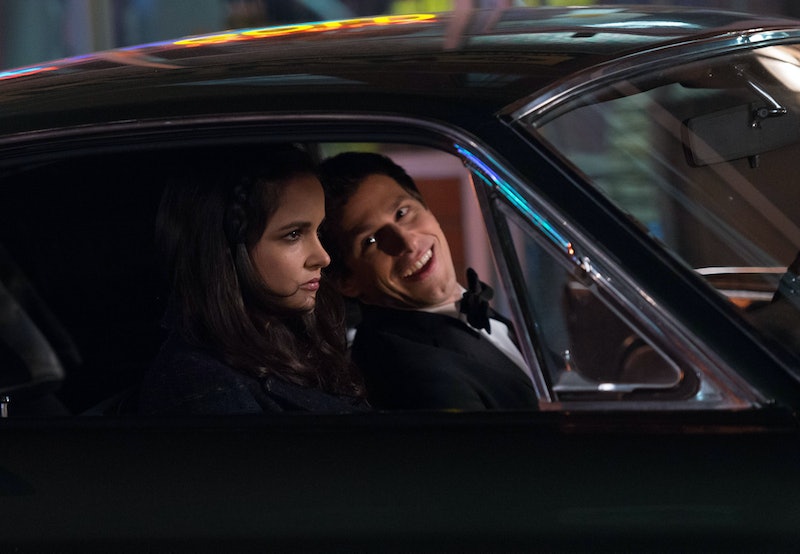 It's never been very easy to love Andy Samberg. Even if you were obsessed with "Dick in a Box" or "On A Boat," the ubiquitousness of the obnoxious references those silly songs spawned was likely enough to turn most of us off to Samberg's "charms." But around the time Samberg began working on Brooklyn Nine-Nine, something began to shift and now, very positive feelings are in full effect. We have a full-on crush on Brooklyn Nine-Nine's Andy Samberg and it feels so, so weird.

On SNL, Samberg was basically the overgrown annoying little brother unless he was doing his rare, but incredible "Mark Wahlberg Talks to Animals" sketch. He'd show up in movies like Hot Rod and do his same ol' schtick: "I'm obnoxious, but for some reason you can't look away!" But those days are gone. He's found a way to channel the annoying quality through an endearing filter: the Michael Schur machine.

But it still doesn't feel right — as evidenced by the fact that it took an entire half season of Brooklyn Nine-Nine to come to terms with this very real change in our lives. We're discerning TV afficionados. We should have been miffed when Samberg took home a Golden Globe for BK99 after only 10 episodes, shouldn't we? We should be concerned that he hasn't earned it yet and that it took Amy Poehler (the actress behind fellow Schur product, Parks and Recreation's Leslie Knope) six seasons to finally be recognized by an award-giving body. But somehow, it was alright. Because we're basically at the def-con level of Samberg comedy crush and there's no turning back now.

But in case you're struggling with this new change in your life and you're looking for ways to comprehend the whirlwind that's changed you forever, here's how Samberg did it:

1. His Adorably Kind "Roast" of James Franco and Friends

On a night when homophobic jokes about Franco were the norm, it was easy to expect Samberg to play into his usual earthy frat boy tone. We figured he'd go for the cheap shots, do his modern day equivalent of the "did I do that?" face, and expect us to roll over laughing. Instead, he gave one of the sweetest, funniest roasts since Norm MacDonald's famous kind roast of Bob Saget and Samberg's was a thing of beauty as well as sound commentary on the incredibly strange practice of roasting comedians.

Sure, this was separate from the actual production of Brooklyn Nine-Nine, but it was filmed around the same time the show was starting and it helped serve as publicity for its debut, so it counts.

2. He Was Pitted Against Andre Braugher

One of the smartest things BK99 creators Schur and Dan Goor did with their star was to pit him against Braugher, who plays his immovable police captain, Holt. Braugher's gruff demeanor was the absolute perfect antidote to Samberg's overactive comedy. Before BK99, Samberg was like a rubber ball let loose in a room, but with Braugher, he's got a proper surface to bounce off of, honing his comedy to perfection we didn't completely know he was capable of.

And in case the implication here wasn't obvious: honing one's comedy is, for some of us, incredibly attractive.

3. His Character Grew Up Quickly

Like so many of Schur's past protagonists — Knope on Parks and Rec and Michael Scott on The Office (though, to be clear, Schur was a writer and not a creator on The Office) — they start out a little flat. Knope started out especially flat. She was little more than the accident-prone Michael Scott clone of Pawnee, Indiana, but eventually, her character blossomed into the icon of feminism and sugar consumption that she is today.

Samberg's Jake Peralta grew into a real person much faster — Schur and Goor must have learned something from working on Parks. While he began as a hot shot detective who couldn't see beyond his own nose, we quickly found that he possesses a giant heart and the great capacity for friendship, especially with his department "rival" Amy Santiago and the office weirdo, Charles Boyle. These interactions lend an air of humility Samberg's previous forms of comedy have not and it's basically kryptonite for the comedy-loving heart.

Though Peralta still keeps his playful exterior, it's moments like the time he punched his salty beat-cop hero for uttering a homophobic slur about Captain Holt or the time he spent all episode trying to protect Terry (the incomparable Terry Crews) from harm on a sting operation, because he saw what a sweet and caring father Terry is, that make him irresistible.

5. A Soft and Subtle Romantic Undertone

It's to be expected that Samberg's Peralta would wind up with feelings for his rival at the station, Santiago. She's pretty, sweet, and his complete opposite: it's a TV no-brainer. But BK99 is playing it slow and subtle, waiting until the second half of the season to give a hint of his well-hidden affections (well, hidden unless you're familiar with the playground rule about pulling a girl's pigtails as a sign of affection). And even once the series established that Peralta could have a little bit of a thing for Sanitago, it's been swept under the rug, left to burn slowly in our minds until the series is ready to allow that story to progress. Comedy first, then crushes.

It's the perfect way to let the televisual love we thought was impossible bloom and grow without us even knowing it.

This final step has little to do with Samberg and everything to do with you. Look, we know he's been a bit of a ham in the past, but Samberg has really grown into a star worthy of our mainly internet and television-based, but very sincere affection. And chances are, you're already there. Don't fight it. The only step left is to just admit it, even it makes you feel weird to do so. (We feel weird about it too.)

Yep. Somehow, it's still there. Andy Samberg, you just might be a wizard.