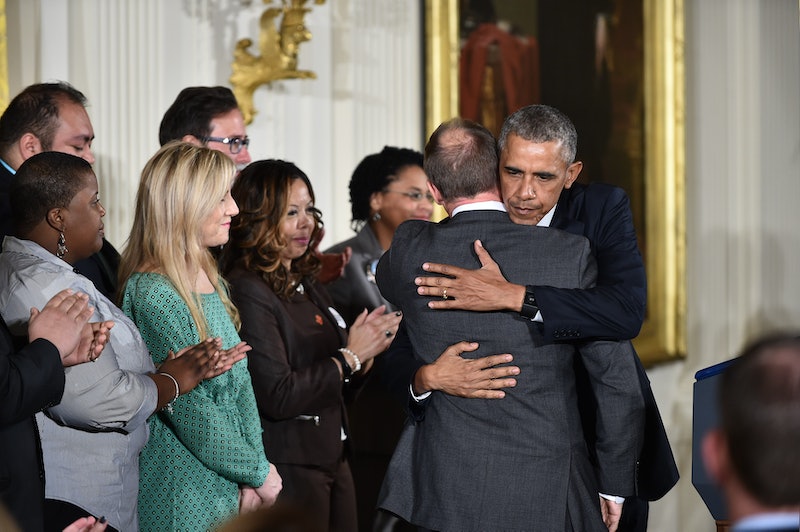 On Tuesday, in a powerful speech at the White House, President Obama formally announced a series of executive orders on gun control in response to the barrage of mass shootings that has taken the U.S. by violent storm this past year. He was joined by family members of victims of firearm violence, and introduced by Sandy Hook parent Mark Barden. Gabrielle Giffords was also present. Obama's address outlined a focused set of measures hoping to effectively curb gun violence and make communities safer in 2016. They primarily include mental health treatment, background checks, and smart gun technology. The address came after Obama's meeting with Attorney General Loretta E. Lynch Monday.

Obama began the speech by speaking about visiting Giffords shortly after she was shot. "I know the pain that she and her family have endured these past five years, and the rehabilitation, and the work, and the effort to recover." He went on to say, "Hundreds of Americans have lost brothers or sisters, or buried their own children," and noted that 30,000 Americans are killed every year. "Somehow, we become numb to it, and we start thinking: This is normal. And instead of thinking about how to solve the problem, this has become one of our most polarized partisan debates. Despite the fact that there's a general consensus in America about what needs to be done."

"We do have to feel a sense of urgency about it," he said. "Because people are dying."

The address touched on four major points: background checks, mental health, community enforcement, and smart gun technology. Background checks will now be conducted by a larger FBI staff 24/7 to ensure that gun customers are reliable and trustworthy. In addition, the illegal firearm market will be investigated more heavily by the National Integrated Ballistics Information Network. The order will also impact an individual's ability to buy a gun if they have been prohibited to do so by a doctor. Under the new orders, this rule will be finalized, rendering both medical records and background checks more transparent. To improve gun safety among people who already own guns, Obama has asked certain administrations to invest money in the research of smart gun technology (i.e. fingerprint activation on a trigger).

In a statement pre-released by the White House, the administration made it clear that the orders were formed to address more than just mass shootings. The end goal is to make communities safer across the board. For example, they mention suicide by gun, gun injuries, and gun accidents often suffered by children as a result of irresponsible gun ownership. "We're not here to debate the last mass shooting," Obama said, "but to try to prevent the next one."

In regard to the Second Amendment, he noted, "I believe in the Second Amendment — no matter how many times people try to twist my words around. I taught constitutional law. I might know something about this." That line earned him a round of applause. He went on to explain that gun control shouldn't be perceived as a bipartisan issue, because many gun owners support ensuring safe gun purchases. He emphasized, "Even the NRA used to support expanded background checks. Most of its members still do. Most Republican voters still do."

"We do not have to accept this carnage as the price of our freedom," he added.

Obama proposed these measures to the nation, but because they were delivered as executive orders, they cannot be combatted. In 2013, he tried passing a ban on assault weapons shortly following the Sandy Hook school shooting. The bill was quickly stifled by the Republican Party and some Democrats. Given these new measures, Obama saw gun violence as an incredibly urgent matter, and that action on it couldn't afford to be shot down by opposition votes again.

More like this
Scotland's First Period Dignity Officer Has Sparked Backlash
By Darshita Goyal
'The Capture' Is Finally Back – & S2 Looks Tense AF
By Sophie McEvoy and El Hunt
The Lionesses Are Calling For Equal Access To Football In Schools
By Sophie McEvoy
Your Daily Horoscope For August 18, 2022
By Alexandria Lettman
Get Even More From Bustle — Sign Up For The Newsletter