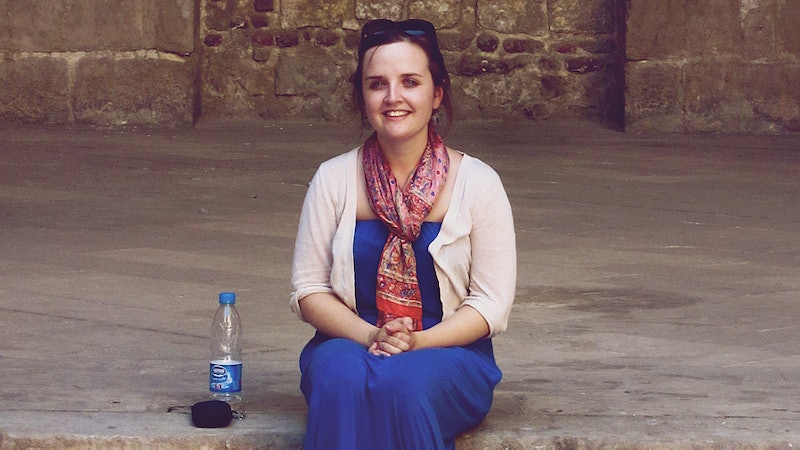 What's it like to find yourself in the middle of a major military coup transfixing the world?

We asked New York native Chloe Bordewich, who moved to Cairo in June 2012, to share her perspective on the scene. Bordewich lives and works as an English-Arabic translator, and has been watching the action unfold outside her window.

How have things changed since you first arrived in Egypt?

The past few days have been by far the most dramatic series of events I've seen. I first arrived in Egypt in January of 2012 to do research for my senior thesis. At that point, Egypt was still under the army's rule—the last army rule now—but I still felt like there was a lot of revolutionary optimism. You know, 'We’re still in a transitional phase, maybe they’ll accomplish something really great, it’ll happen as soon as we transition out of military rule...'

When I came back last June, it was just before the second round of presidential elections, and that was the point I think, that liberals—or at least the young liberals who I had the most contact with— were starting to lose hope in many respects. Their choice in the election was between the Muslim Brotherhood’s Morsi, or Ahmed Shafik, who was a representative of the old regime. So they were really stuck choosing between the lesser of two evils. And I think that was the beginning of a very disappointing phase.

At the same time, I think people hoped it would turn out for the best. Though many people were negative about the Muslim Brotherhood last June, it was still, 'OK well, we have an elected president now, let’s try to see, let’s hope for the best. This is something that’s unprecedented in history.' And then things really devolved quickly. Over the last year, you've seen people just get more and more bitter over the Muslim Brotherhood regime.

So you’re saying people have gotten more bitter, less optimistic. Who are these people, and what are they complaining about?

Here's the thing: you have to differentiate between the different kinds of people in Egypt. There's such a vast wealth gap, that when you look at the ideological objections of sort of educated liberals, those are not the same things that drew the sort of poor, less-educated masses to revolt against Morsi. Frankly, I don't think [the majority] are angry on an ideological basis. It’s about the economy, how poor people are, and [how] those kinds of things aren't improving. Obviously, ideological resentment towards Morsi gets fed into that, but I don’t think it’s the basis for that part of the population.

For educated and liberal [Egyptians], you get the sense that people are angry at the mixing of religion and politics. I think that people are really angry that Morsi squandered the opportunity to form a coalition government incorporating people of different political orientations and backgrounds: Leftists, Muslims, Christians, and so forth.

[Still], I talk to our doorman about politics, and he said, ‘Of course, if I weren't working I'd be there.’ And I asked ‘Do you really think the military is the only other option, that they’re going to be better?’ And he said ‘Of course they're going to be better! They’re not perfect, but we’re used to the military, we've had them a long time, so we know what to expect.’ So for people coming from the U.S., it’s hard to grasp that there is a sense of trust there, that we don't have.

Now that the unrest has started, what is it like for you to be in Egypt?

We've mostly been staying at home–but not completely–starting on Sunday. Our neighborhood is not very far from where the clashes are happening, but it’s far enough that it feels quite safe to go out to the grocery store and things like that. I don’t feel like people are going to kill me or anything. So, I mean, in that respect, things have been sort of normal. This morning I went out to visit a friend.

Sunday, there was a sense of a sort of celebration almost in the air. This was really before the violence started. And then it got dark, and then Monday and Tuesday happened, and I think more violence [began] as more factions came into play, and that's when clashes started.

[Because] of that, obviously, we’re going to stay inside. I haven't really felt good about going out at night. You don't know who's going out there with weapons.

Although, I can’t say ‘Oh, I feel really scared.’ I don’t feel really scared. I think that's a big result of having lived in Cairo for the year— there’s sort of base levels of insecurity all the time. It’s a really, really chaotic, busy city. Crossing the street itself is a risk. Things are always chaotic. Obviously not on this scale, but [there's always] a level of that.

What’s your family saying at home?

To be honest, my family is quite rational. I don’t think they’d necessarily be representative. They just asked, ‘Well, is the Embassy telling you to go home?’ and ‘Oh, you live on the same street as the Prime Minister? Wonder if you'll have tanks on the street.' And, yeah, ‘Are you staying safe? What are you doing?’ But they haven't panicked yet.

What’s it like to be an American there right now?

There's been a baseline of anti-American rhetoric since we've been here, and I think longer. There are a lot of reasons for that. Some [of it is] a sort of anti-colonialist resentment, and then there is recent resentment of Americans for their support for Mubarak, and American support for or—I should say ‘tolerance of’— the Muslim Brotherhood regime. I hear really creepy conspiracy theories about how the American government just wants to prop up Morsi.

I’m curious to hear what the local media has looked like to you.

On TV, it's a channel, an independent satellite channel. It was started right before the revolution, but it's gaining more prominence as an alternative to the state channels, which are pretty, uh, dull to say the least. And of course, we've been following Twitter.

Besides the media, what do you think Americans in general need to understand about Egypt?

Whoa, sorry—my friend just showed me a picture of a bunch of tanks parked in the square that’s about a five minute walk from our house.

Oh, wow. What’s it like to see that picture?

It's really surreal. I was walking there this morning, I just walked right past them. Soldiers were sitting there and we just didn't really connect, I got on a microbus and went down the street. I’m looking out the window onto the neighborhood, and there are people going by [right now] like nothing is going on.

It's so surreal because you read about coups in books, and you see it in movies and everything, but you don't know what it really feels like. People are still sort of going about their daily lives—and McDonalds, which is next door to my building—is delivering. They actually deliver on motorbikes! That’s a really strange sort of experience to have. Like, how should be reacting? We haven't figured it out.