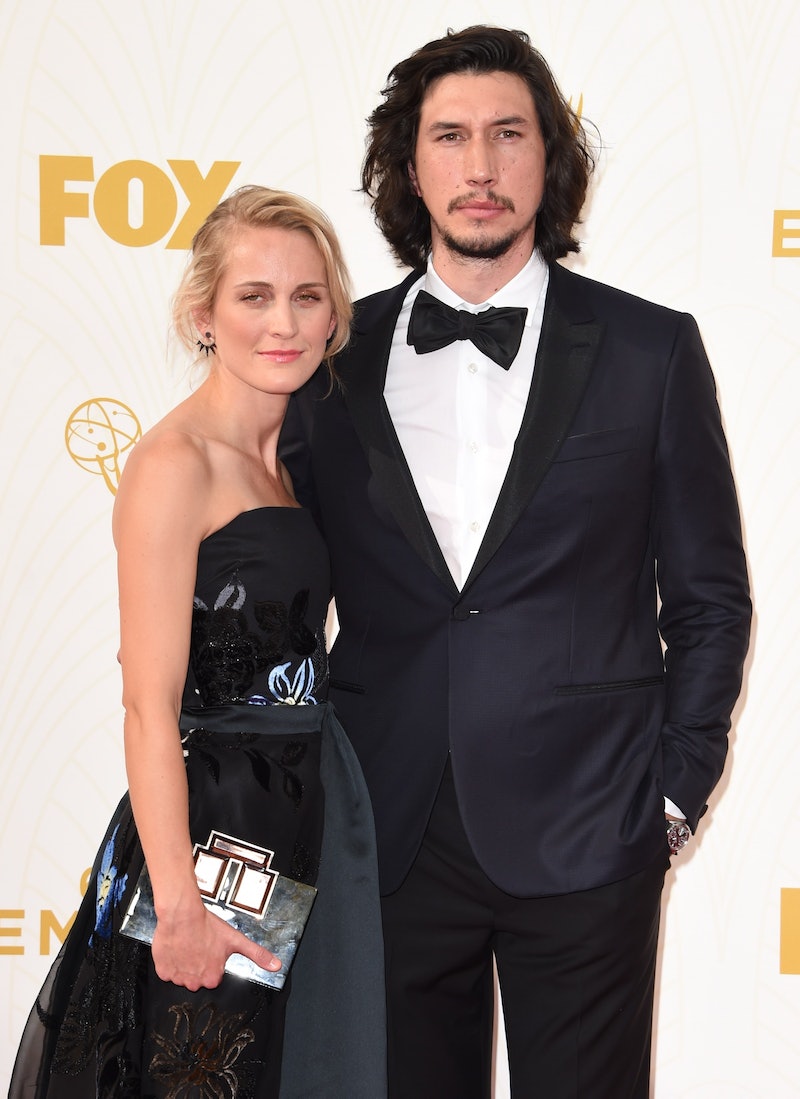 I have been a Girls fan for a long time, and have always had a love-hate relationship with Hannah's on-and-off boyfriend Adam Sackler, played brilliantly by Adam Driver. Adam Sackler is strange and selfish, but oddly attractive, and this is all attributed to Driver's impeccable acting skills, which nabbed him the role of a lifetime as Kylo Ren in Star Wars: The Force Awakens. His role as Kylo Ren is making everyone a little more curious about his own personal life and he's not much like his Girls character. Adam Driver married Joanne Tucker a little over two years ago, but they met long before that.

Driver has been popping up on red carpets around the world to promote The Force Awakens and has been joined by a beautiful blonde on his arm: his wife Joanne Tucker. I tried to do some social media digging, which is my usual first stop to get some dirt, but neither Driver nor Tucker have Twitter or Instagram! This proves to me that they have no problem in being private, but he has shared some details on Tucker and how they met and eventually married.

So, let's go back in time. One very interesting tidbit that I never knew was that before he really pursued acting, Driver joined the Marine Corps! After 9/11, he was determined to serve, which he said eventually pushed him to become an actor even more. He was faced with his "own mortality" many times while training, and after one potentially deadly accident, he told Rolling Stone, "I was like, 'I'm going to smoke cigarettes and be an actor when I get out.' Those were my two thoughts. I wanted to smoke cigarettes and be an actor." After a mountain bike accident got him discharged, Driver auditioned for Juilliard School and got accepted.

It was at Juilliard that he met Tucker, who was also studying acting. In an interview on Broadway.com in 2009, Tucker was described as "a Dalton grad who became Driver’s girlfriend." The actor had this adorable thing to say about her:

She taught me what Gouda cheese is... and that you shouldn’t talk with your mouth full and spit on the sidewalk. I told her about Rolling Stone and how it could be interesting and entertaining.

Aww, well, this says a lot about their relationship. While at Juilliard, Driver still felt connected to his military roots, and along with Tucker, founded Arts in the Armed Forces in 2006, an organization that brings theatre to the armed forces. Tucker currently serves as the Artistic Director for the organization, while she still dabbles in her own acting career. The long-time couple married in 2013 with a destination wedding and a source at Us shared, "They've been dating forever, years, and live together; [they're] very comfortable and in love. She was with him before the Girls fame... They both love theater and the arts. She respects him so much... Everyone on the show is very happy for them."

It seems like Tucker and Driver have always supported each other through and through, so it's exciting to see all the new career steps they are making, together.