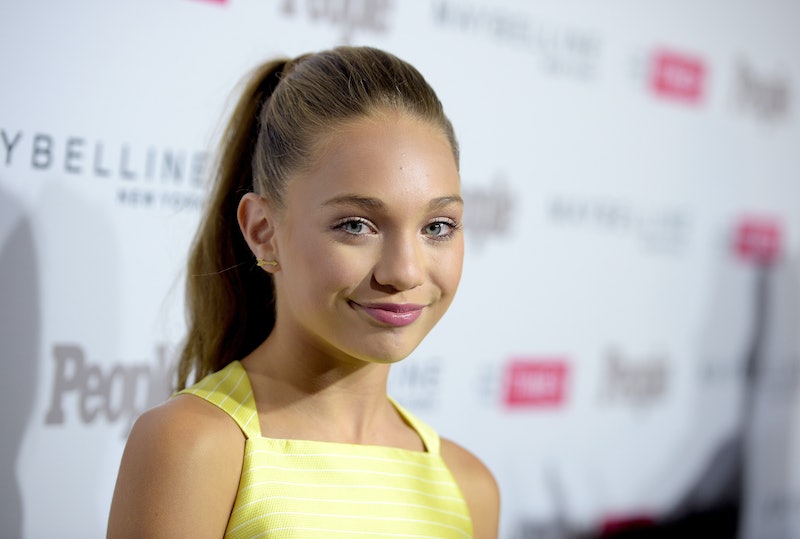 From reality TV fame to an accomplished dance repertoire to acting as Sia’s muse, at only 13 years old Maddie Ziegler has already had a successful and storied career. But that's not even all the Dance Moms star has done. She also models, has a huge social media following, and has talk show appearances and cameos that make for highly contagious viral videos. So, it only makes sense that Maddie Ziegler is nominated for a People’s Choice Award this year in the category of The DailyMail.com Seriously Popular Award.

Maddie is joined in her category by fellow 2015 Internet heavy weights Bella Thorne, Cara Delevingne, Kylie Jenner, and Ruby Rose. They all mesmerized fans with gossip, performances, and perfect eyebrows in the past year. But even among such stiff competition, Maddie deserves to take home the prize.

With a new season of Dance Moms on Lifetime, a burgeoning acting career, and all sorts of other projects, Maddie is a modern renaissance woman (er, tween?). And, with her Sia music videos reaching more than 1 billion views — yeah, that’s billion with a “B” — there is no doubt that this girl is seriously popular. Here are seven reasons why Maddie should win The DailyMail.com Seriously Popular Award at the PCAs on Wednesday night.

From pint-sized dancer to professional powerhouse, fans have been able to watch Maddie’s talent flourish over the course of Dance Moms' s five seasons and in music videos.

2. She Works Hard For Her Success

On Today, Maddie said that she dances about 40 hours per week (so the equivalent of a full-time job), often leaving the dance studio between 8:45 and 9:45 p.m.

3. Her Appearance On Pretty Little Liars Was Incredible

Just an embarrassing childhood picture (from last year), when I was in a hit music video and appeared on dozens of talk shows and at the Grammys. NBD.

Seriously, here she is with Taylor Swift.

Maddie isn't afraid to show her confidence, which is something we can all learn from. In the video above she gets honest about her success, saying, "losing is not a good feeling, but I don't ever lose anyway."

7. Her Face Is Everywhere

In 2015, Maddie modeled for Target, did several photo spreads, and was the face of Betsey Johnson’s dancewear line for Capezio.

Beyond being the very definition of "seriously popular," Maddie has proven that she deserves to be recognized for her many accomplishments, and I hope the People's Choice Awards do just that on Wednesday night.