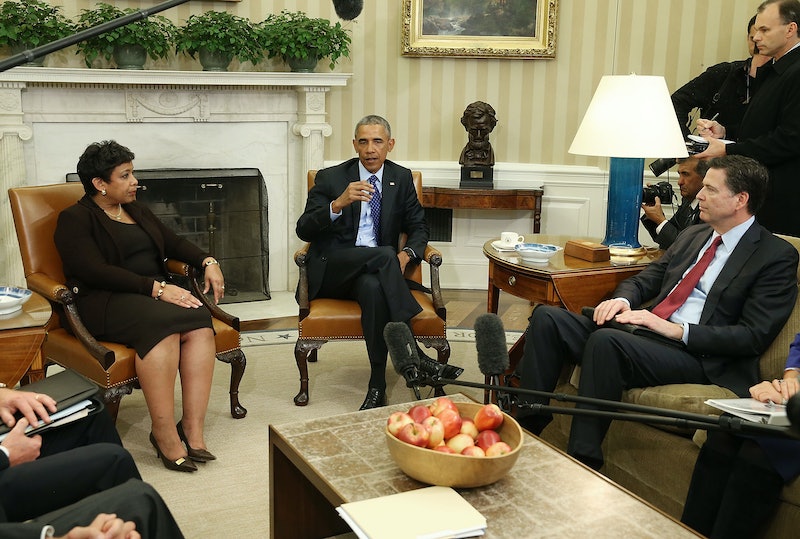 This week, the Obama Administration released a comprehensive package of executive actions designed to act on the American gun crisis, since Congress "repeatedly failed to take action and pass laws that would ... reduce gun violence," as the president put it. In collaboration with Attorney General Loretta Lynch, the Department of Homeland Security, the Federal Bureau of Investigation, and the Bureau of Alcohol, Tobacco, and Firearms, among other federal agencies, the president's four-point gun control plan will change the American landscape forever. One element of the plan will be particularly challenging to implement, but also critically important: working on a community-based approach to stop gun violence.

In addition to acting on community policing, the president is also announcing overhauls to background check systems, gun safety technologies, and mental health access in America. It's a bold plan that may become a signature of his administration, a last hurrah from a president who has stopped being coy with Congress and started playing hardball.

Community-based solutions for gun violence represent a bit of a backdoor for gun control reform, because President Obama's scope is limited with executive orders. Only Congress can pass a law, though it may do so under direction and advice from the president, such as the steady torrent of pleas from the White House for gun control. The president can issue an executive order with Congressional support, but they can choose to reject its authority with a bill that effectively overrides it, while federal courts may find it unconstitutional. However, he can use such orders to direct federal agencies, and that's the tool he's exercising to accomplish his agenda. Of course, the next president can choose to reverse such orders, something Republican presidential candidates have already threatened to do.

Pressuring local and regional law enforcement agencies to "focus on smart and effective enforcement of our gun laws" can utilize existing legislation to keep guns off the streets and out of the hands of people who shouldn't have them. It also establishes a framework for cooperative policing that could endure even if the worst case scenario (aka President Donald Trump) were to happen.

Under the plan, the president has directed AG Lynch to meet with attorneys general from around the country to discuss prosecutorial strategy and encourage them to continue taking a hard line on gun-related crime — especially when it comes to cases that could set smart precedents for future courts. Improving federal or even state gun control, through whatever means, is useless without enforcement, and for that we rely in part on law enforcement agencies, prosecutors, and attorneys general, because they're the ones who take on individual violators of the law. Making it clear that they're being held accountable for maintaining a tough stance improves the outlook for safer communities across the United States.

It also sends a message to potential criminals and those who supply them with weapons: Law enforcement is watching, and the risks of a serious prosecution are rising. Thus, sellers facing new requirements like stricter background checks now have an incentive to comply with the law, for example, while people using guns in the commission of crimes will be aware that the chances of additional charges just got more likely. Many states, as well as the Justice Department, for example, allow prosecutors to make additional charges when weapons are involved in a crime, and they can result in increased fines and jail time.

The president's directives also include some increased responsibilities for the ATF, including requiring gun dealers to report guns lost or stolen in transit, maintaining better tools for tracking illegal online gun sales, and improving the National Integrated Ballistics Information Network. In return, the president has promised enough funding to cover 200 new staffers — though, of course, Congress will need to be on board with that proposal. The National Shooting Sports Foundation, a key lobbying group, opposes the first requirement, arguing that gun purchasers are better equipped and legally responsible for loss and theft, rather than sellers, who no longer retain title to the weapons in question.

There's another important stipulation in the plan: State attorneys general are being ordered to step up their domestic violence outreach efforts. Ninety-three percent of femicides take place by gun, over half of murdered women are killed by intimate partners, and having a gun in a volatile domestic violence situation increases the risk of death by a staggering 500 percent. Limiting gun ownership by abusers with records via background checks radically cuts down on domestic violence deaths; improving these domestic violence resources will save lives.

Not everyone is a fan of this proposal. Perhaps unsurprisingly, the National Rifle Association came out against the proposal hours after Obama announced it. "The proposed executive actions are ripe for abuse by the Obama Administration, which has made no secret of its contempt for the Second Amendment," Chris W. Cox, chief lobbyist of the NRA, announced, condemning the president's "emotional, condescending lectures." The NRA wasn't alone in making snide comments about the president's "emotions," with numerous people taking to Twitter to mock Obama for crying on live television while talking about the Sandy Hook shooting.

"The NRA will continue to fight to protect the fundamental, individual Right to Keep and Bear Arms as guaranteed under our Constitution," Cox added, highlighting the fact that many advocates opposed to gun control have a radical individualist interpretation of the Second Amendment. They're not alone; a December poll conducted by CNN found that 51 percent of Americans surveyed opposed tougher gun control, and 32 percent stated that Obama had gone "too far" with gun control efforts — notably, 53 percent of gun owners surveyed agreed with this statement.

In combination with other elements of the administration's plan, reminding individual communities and law enforcement agencies of their responsibilities when it comes to identifying and prosecuting gun crime should reduce the horrific gun violence statistics in the United States, where 33,636 people died in shootings in 2013. Now, to make sure the executive orders stick.

More like this
What Is Barack Obama’s Net Worth? He Makes *Way* More Now As An Ex-President
By Hugh McIntyre
Manchester Arena Attack 5 Year Anniversary
By Ella Glover
How To Fight For Reproductive Rights, Based On How Much Time You Have
By Courtney Young
Harry Styles Called For "Backlash" In Powerful Statement On Abortion Rights
By El Hunt
Get Even More From Bustle — Sign Up For The Newsletter