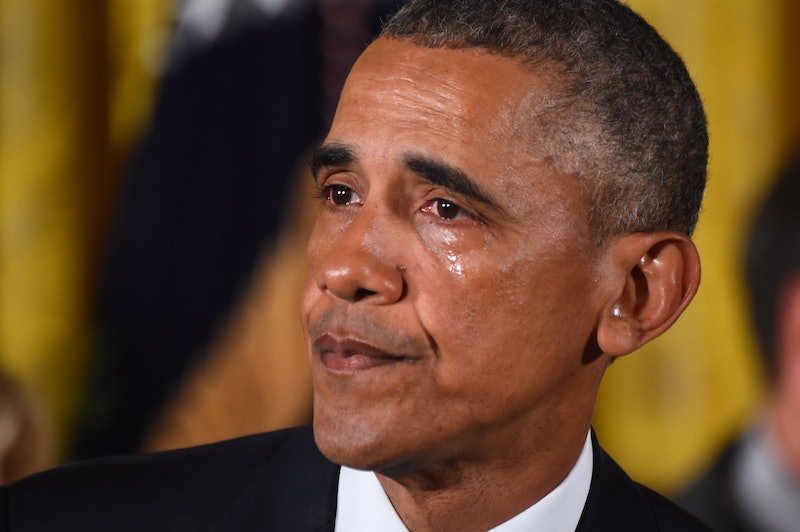 In response to the large amount of mass shootings that have occurred during the past year in the United States, President Obama declared a series of executive orders on Tuesday that will contribute to stricter gun control — a precursor to a town hall event he'll hold on Thursday. The announcement comes after a meeting with Attorney General Loretta E. Lynch, who helped Obama solidify the details of the package on Monday. The executive actions include expanding the frequency and depth of background checks, increasing and more closely monitoring mental health treatment, investing resources into smart gun technology, and working with U.S. Attorneys to implement these regulations. The new regulations, which aim to ultimately create safer communities, have attracted both supporters and dissidents in the political and public spheres.

Thus far, the Republican party has — surprise! — strongly disagreed with the new regulations. Catherine Frazier, Ted Cruz's spokeswoman, expressed an outlook that's prevalent amongst the party and the other GOP presidential candidates in a statement to The Washington Post.

President Obama is trying to distract Americans from his failure to address the true threat of radical Islamic terrorism, and instead going after the rights of law-abiding American citizens — it is complete lunacy. If Ted Cruz is elected president, the lawlessness will end on Day One, and Americans’ personal liberties will be restored and protected.

Mass disagreement among the Republican party, which may be elected to office this year, gives gun control law supporters an even greater reason to display their approval of Obama's most recent executive actions. Even still, the Democratic party is not convinced. For example, presidential candidate Hillary Clinton, believes Obama's regulations don't hit hard enough.

We've got to act, but I don't think that's enough and I think we're going to have to keep pushing forward on the political front and I intend to do that, to take on the gun lobby and to work with responsible gun owners.

Regardless, the executive orders represent a starting point for greater and hopefully more effective gun control. Although political parties are more staunchly set against each other on this matter, there are discrepancies in public opinion as well. According to a Washington Post/ABC News poll, 42 percent of respondents believe in stricter gun control laws, yet 47 percent still believe that more people should carry guns legally. This is just one of many representations of the public's opinion on the matter. Polarity in both the political and public sphere make it considerably more important that people who agree with stricter gun control laws speak up and state their case. Here are some ways you can show your support for gun control and safer communities.

1) Research and Understand the Opposing Viewpoint

It's simple: If you understand them, they're more likely to be open-minded towards you. You don't have to agree with lax gun laws in order to understand the reasons why people refuse to support gun control. Entering a constructive debate in an informed manner will encourage others to respect your own viewpoint and perhaps be more willing to even agree with you. Generally, individuals become less rational and more one-sided when they feel they need to defend themselves or their opinions right out of the gate.

If your family or friends own a gun, encourage them to practice responsible gun ownership by locking their weapons in a safe. You're not telling them they can't own a gun. Instead, you're simply suggesting that they store it responsibly so it doesn't fall into the wrong hands.

3) Show Your Support On Social Media

When friends post new articles or points of view on social media, they generally catch my eye and allow me to see an issue through a different lens. If you want to, you can post articles about why we should support stricter gun laws on Twitter and Facebook or ask others to contribute their personal experience with guns to the thread. Better yet, create a hashtag that urges Twitter users to broadcast their support as well.

Social media is one of the best ways to create an army of young, vivacious people when it comes to supporting progressive politics. Take advantage of it!

This one is a little less moderate than the others, but one has to acknowledge the dangerous pull of special interest groups on Congress. One month after the Sandy Hook school shooting in 2013, Congress opposed a ban on assault weapons. In a race to the Senate floor, the NRA presented a "Stop the Gun Ban" to Congress before the proposition to ban assault weapons was even announced.

Republican candidates value endorsements from the group, and The Washington Times even predicts that the "gun vote" will play a role in the 2016 presidential elections. To decrease its influence in politics, you can donate money to organizations such as Every Town for Gun Safety that seeks to weaken the NRA's hold on government.

The Brady Campaign is the largest grassroots organization seeking to exercise greater gun control on a bipartisan front — it's basically the opposite of the NRA. The campaign already released a statement on Monday, urging Obama to stay true to his promises to crack down on guns. With hundreds of thousands of members and millions of dollars, it's got some major influence on the political sphere. Their long-term goals over the next decade are specifically outlined on their website, as well as the ways in which you can contribute.

6) Create Or Join An Advocacy Group

If you live on a college campus, you've got it made when it comes to having an array of advocacy groups at your disposal. Chances are, one might already exist! Joining a gun control advocacy group is a great way to show your support and keep up to date with the latest protests and events without breaking the bank.

Aren't satisfied with the gun laws in your state? Write a letter to your state representative! It doesn't have to be lengthy, as long as you get your point across and show that this is an important issue to you as a voter. Signing petitions, such as MoveOn.org's "Gun Control. Now." is comparable in effect.