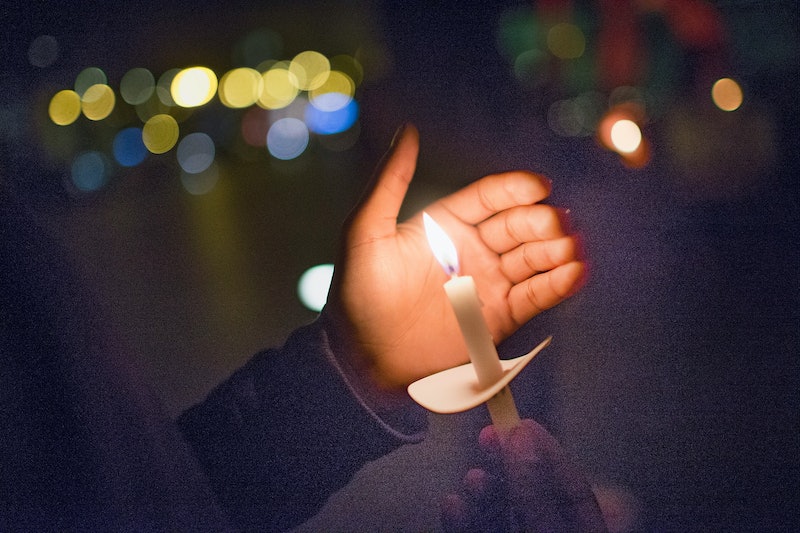 On October 29th of 2009, at the beginning of my senior year of college, I met up with a friend at a popular bar near my campus — a young man I'd long been infatuated with. I wasn’t unique in my pining; everyone I knew was a little bit in love with him. He was an activist, a volunteer, a youth mentor, and a wholly energetic mind. He was the kind of kid who wanted to be president one day; someone who made you feel as though your own life was ripe for great achievement and transformation. He was going to change the world. That night was a rare occasion when we were alone together, and I basked in every minute of it. We sat huddled over our beers, foreheads nearly touching, laughing and talking about books, school, post-graduation plans, and the myriad ways we were both going to make the world a better place.

He was killed 48 hours later, on the streets of Chicago, by a TEC-9 — for no other reason than a gun was there, in the hands of someone who wanted to shoot it.

I come from a city some people call Chi-Raq. It’s a 227 square mile strip of high rises and brownstones, apartment buildings and housing projects, a place where over 2,900 people were shot last year; where an average of 40 people are shot every weekend during the summer months; and where more than one person a day was killed by guns in 2015.

After graduation, I moved to East Los Angeles for a full-time volunteer position, working for a nonprofit called Soledad Enrichment Action Inc, which was founded by mothers in East L.A. who had lost their children to gang violence. They established the organization to provide services to high-risk individuals and families in their gang-affected communities.

Working in an alternative high school setting, I met young people whose entire lives revolved around gun violence. On the first day, I learned how to "wand" students for cell phones, knives, and guns with a large Garret SuperScanner, before I even learned their names. I learned the names and symbols for each gang in the area; I learned to erase their graffiti from textbook pages, and homework assignments, and classroom walls, and desks. I bent the rules to drive students home when they felt targeted by a particular gang, and were afraid to cross the streets of their own neighborhoods on foot.

One morning, I watched a student unwrap a homemade bandage from his hand, where the skin between his thumb and forefinger was torn completely through, the remaining flesh raw, angry, and infected. When he caught me staring, he just looked at me and grinned. “Don’t worry, Miss,” he said. “It was a small bullet.” Another student told me about the clothing and hair products she stashed in houses throughout the neighborhood. She did this because her father and step-father were in opposing gangs. “I never know who will be fighting who,” she explained. “I want to make sure no matter where I sleep, I’ll be able to fix my hair for school in the morning.”

I met mothers who expressed a complex mix of insurmountable grief and uncomfortable peace after the death of their children. “Mija, you don't know anything about terror," they'd say, describing days spent cringing every time the phone rang, and nights spent awake and in constant fear, listening for the gunshots that might kill their children, for the phone call telling them their child had been shot. Perhaps they would nod in the direction of one of the crowded, vividly decorated cemeteries that crop up in unexpected corners of of Los Angeles. “I know exactly where he is now. Exactly where he will always be. I don’t wait in fear anymore.”

Do we really want to live in a country where mothers — particularly mothers living in certain zip codes, where gun violence proliferates — expect that their children might one day die from gun violence?

Some people like to say that the issues of gun control in the United States are complicated — that placing restrictions on legally purchased guns won’t address the illegal gun market. Or that if we installed guns in America’s schools like we do fire extinguishers, then atrocities like Columbine, Virginia Tech, Sandy Hook, Red Lake Senior High, and Northern Illinois University would be preventable. Or that everyday Americans require assault rifles in the event of a military takeover or zombie apocalypse. Or that police response times are too slow, and citizens need to be able to defend themselves. Or that, depending on where you come from, police assistance isn’t an option. Or finally, that guns don’t kill people, that people kill people.

Maybe these claims are true — many of them probably are, to one degree or another. I don’t pretend to know everything about gun control. I don’t know what it’s like to live in a neighborhood where police are viewed as enemies rather than advocates. I don’t know the experience of living in a rural county where guns are a way to ensure food, fun, and survival, rather than an instrument of violence. I’ve never lived in a part of the United States where carrying a firearm in public is legal, unremarkable, and not cause for alarm.

But I know what gunshots outside the front door sound like. I know the feel and smell of flesh that has been ripped apart by a bullet. And I’ve stood at the graves of friends, students, and strangers whose journeys were cut short for no other reason than the fact that we live in a country with too many guns and too few people willing to do anything to change that.

Every single one of us CAN do something to take a step towards ending gun violence in this country, right now. We can start listening to the voices and ideas of young people who have grown up in a country where they face the threat of gun violence every single day of their lives. We can choose to advocate for the right of people to feel safe in their own homes, and neighborhoods, and schools. And we can rally behind our president — a president who comes from the same hometown I do — who is finally proposing to take action, after having to console fractured communities and families far too many times during his years in office. Do we really want wait until we’ve all been personally affected by gun violence to see how uncomplicated gun control really is? Speaking from personal experience, I can tell you that the answer is no.