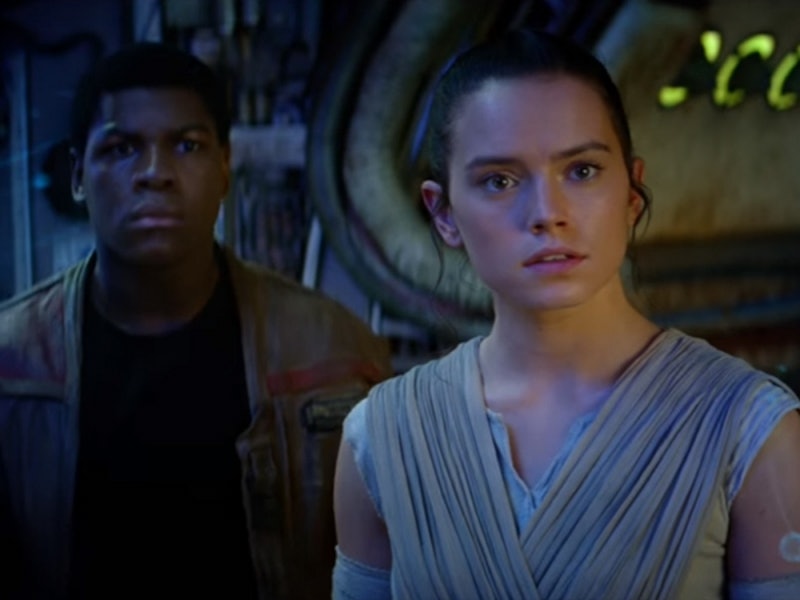 It finally happened. They made Star Wars: Episode VII . You stood in line in the freezing cold for hours, you had your eyes surgically altered to avoid blinking for the full two hours and 16 minutes so you don’t miss a single thing. You loved it, you hated, you marathon-ed the original trilogy and made a scene by scene comparison with The Force Awakens … And now that you’ve stalked the movie theater to rewatch it so many times, they’ve threatened you with a restraining order, you’ll need something to stave off the withdrawals until the movie goes to video.

Clearly, you’ve already read all the old Star Wars novelizations, right? If you haven’t, then you may as well black out your schedule and dive in wherever your nerdery may guide you. Seriously, from a Han Solo trilogy to a Han and Leia Star Wars romance novel, there’s a novelization for every Star Wars fandom.

But maybe your fandom is more of the rabid consume-everything-Star-Wars-the-minute-it-comes-out variety, and you’ve already read and watched anything in the Star Wars canon. Now, you’re feening for a fix of epic space opera. Well, happily epic space operas are pretty popular with the creative sort, and there are plenty of amazing books that will get you through your Star Wars withdrawals for the next 500 days until Episode VIII.

There's an evil empire, there's space travel, immense space ships and AI, and plenty of aliens. Also, of course, vengeance. The coolest part about it, though, is that the hero is a human who has been controlled by the AI of her ship for some 1,000 years.

2. The Ship Who Sang by Anne McCaffrey

Maybe it’s Kylo Ren or Darth Vader, pick your man behind the creepy black mask, that won you over to the Star Wars franchise. Well, if you’re looking for broken-bodied people stuffed into metal suits, then The Ship Who Sang might tide you over. In the world McCaffrey creates here, children born with physical disabilities are put into metal, computer-connected shells and used as the brainpower for space ships. It’s not exactly the dark side, but the cool partnerships between these brainships and their companion/pilot/muscle will dredge up some of those feels you have for Han and his precious Millennium Falcon.

A quirky crew of ragtag adventurers on an impossible mission while the divided warring universe blows things up around them? Yep, Nova fits squarely into the realm of space opera with its crew of misfit adventurers daring to fly a ship through a super nova in order to find a renewable source of fuel for the universe, all while dodging the universe’s feuding factions, one of which is basically a family of oppressive fuel industry tycoons.

Star Wars isn’t very kind to its young people. There’s a whole lot of young people being abandoned, kidnapped, orphaned, turned into faceless soldiers, and just generally not growing up in the most loving environments. When these orphans and otherwise traumatized youths tend to find themselves at the mercy of forces greater than themselves, they can end up big baddies or powerful heroes. Warchild dives a little deeper into the grayer areas of this with its young hero Jos orphaned by pirates, kidnapped and trained as a spy by aliens, and struggling to figure out what’s right in a universe ravaged by intergalactic war.

Hyperion has its share of monsters, space travel, time loops, inter-galaxy religious monarchies, and of course, naturally, a good old "chosen one." You’ve gotta have a chosen one. As if your inner book nerd is already ready to geek out on this series, Hyperion also makes a literary nod to Geoffrey Chaucer’s The Canterbury Tales as it follows seven pilgrims as they journey together, each one getting the chance to tell his own tale.

In a galaxy far far away… there’s a crucially important desert planet, a conflicted hero, a weird magical thing called “the Forc—” I mean, the Spice, and, naturally, the downfall of a galactic empire. Dune is sort of the space saga of all space sagas. It’s nearly as richly detailed and elaborate as Tolkein’s Middle Earth, and it’s as epic as Star Wars. It basically raised the bar for space operas, throwing out the gimmicks and spandex and trading them in for incredible world-building and complex plotlines.

So, it’s a little more Independence Day than Star Wars, except that the front lines are lightyears away from Earth and the alien race humanity is fighting against is actually many different alien races, all fighting over the few habitable planets in the universe. So, it’s not exactly like Star Wars, but it’s in the stars, and there’s plenty of war (seriously, emphasis on the war). But the best part of this series comes in the form of its unlikely hero — a 75-year-old widower who joins the Colonial Defense Force and finds that he’s more than a little unusually adept at soldiering...

If your favorite thing about Star Wars is all the diversity of life and planets in the vast universe, then LeGuin’s Hainish Cycle is a good place to get your fix of weird alien cultures and planets. Surrounding an intergalactic alliance of alien races, the books delve into different races on different planets and their exceedingly diverse cultures and physiologies and all the difficulties that come along with such an alliance.There aren’t any wookies, but there’s a bit of mind-reading (Mindspeech) and even some bat-people!

Your love for Star Wars might be a nostalgic one. Maybe you remember lining up to see the originals when they first came out in the '70s, or maybe they incited your first inclinations toward nerdom. Well, The Vorkosigan Saga just might be the space opera for adult you. It’s less big on the black-and-white good versus evil and there might be fewer crucial space battles, but it’s a nuanced take on intergalactic war and it offers up rich, developed characters with complex relationships. The series deals in big grown up issues, like ethics, identity, politics, but doesn’t skimp on the cool futuristic tech, space travel, and adventure.

You might have already devoured all of the old Star Wars comics, but Marvel’s been putting out a whole new series starting in 2015. Issue No. 1 came out in November 2015, and the next issue, No. 15 is out January 20. A short burst of Star Wars every couple of weeks oughtta tide you over until Episode VIII.