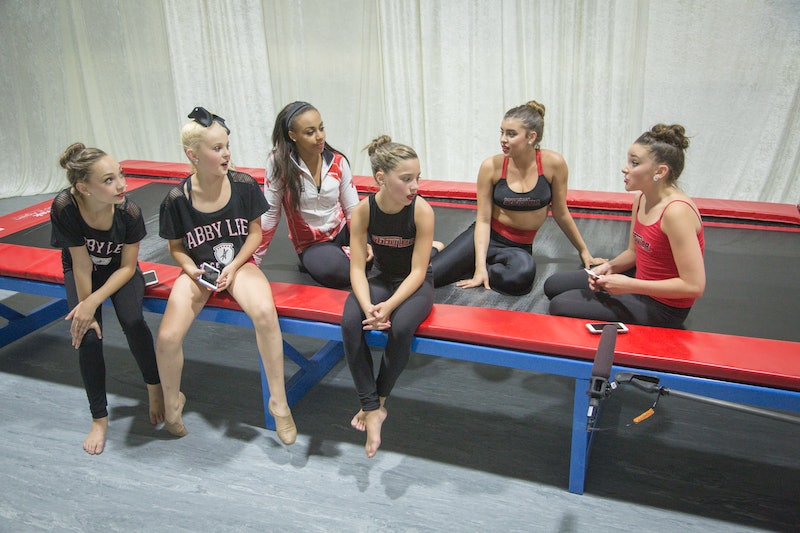 Changes are afoot for all members of the ALDC in the Dance Moms Season 6 premiere and it certainly caused some drama among the moms. When the team heads back to Los Angeles to begin training, their star dancer is missing — Maddie landed her first major movie role and is filming in New York City. The team generally has more success when Maddie's there, but Jill hopes her absence will give Kendall a chance to shine. A wrench is quickly put in that plan when Brynn Rumfallo joins Dance Moms — and, based on her performance in the premiere, I doubt she's going anywhere.

Brynn is given the only solo of the week and she has her work cut out for her, because she's going up against a boy from the BDA. As we've seen time and time again on Dance Moms, boys are often given an advantage at competitions because judges want to encourage them to stick with dancing. But, it's clear from the moment we see Brynn in rehearsal that she's an incredibly talented and well-trained dancer, and her mom notes that she has a strong background in ballet. Jill is furious that Kendall doesn't have a solo and vents that, "Kendall has worked too hard to be Abby's #2 to be replaced by Brynn." Predictably, this sets off a fight between Abby and Jill — and all that conflict seems to upset Kendall more than the fact that she doesn't have a solo.

On competition day, Brynn kills it in her lyrical solo. She has amazing extensions, seriously impressive technique, and great stage presence. Even before awards are handed out, Abby says that she definitely has a real future at the ALDC. Maddie, who has returned to Los Angeles to support her teammates, says she's sad to not be competing but she's having a great experience filming Book of Henry. She admits that she's a little surprised that Abby brought Brynn in, but she understands because the movie is going to take up quite a bit of her time in the coming weeks.

Brynn earns a well-deserved first place trophy, and the group dance also wins — so the team is off to a strong start this season. Backstage, Abby challenges Kendall to keep her emotions in check and push herself, because she knows she can be amazing. It's great to see Abby giving Kendall some constructive criticism for a change, but judging by the previews, we have a whole lot of drama ahead. It looks like Brynn will be at ALDC for good, and all the moms seem threatened by her presence. Abby has described her as capable of "filling Maddie's shoes" when she's working on other projects — and, unfortunately, part of filling in for Maddie will probably come with a huge dose of jealousy from the moms.