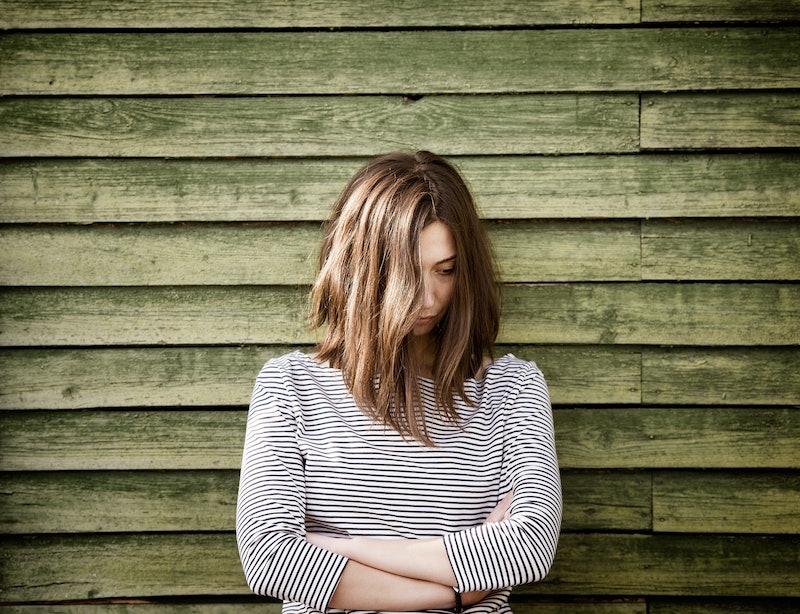 There's no doubt about it, breakups are hard and can be horribly painful, but can the hurt caused by a separation lead to an actual broken heart? Unfortunately, science says yes — it's called broken heart syndrome. First named “takotsubo cardiomyopathy” by Japanese researchers in 1990, is a condition in which a person experiences heart attack-like symptoms that don’t seem to be caused by coronary artery disease.

While it was discovered around 25 years ago, the true causes behind the attacks have remained a mystery. Until now. According to new research published in the American Journal of Cardiology, the pain felt by a “broken heart” episode might be connected to the part of the nervous system in charge of calming the body down. The key to prevention? Try a little yoga and meditation.

Harmony Reynolds, a cardiologist at NYU Langone Medical Center led a study to find reasons why some women suffer from broken heart syndrome. The study took 20 women and put them through a series of tests meant to bring on physical and mental stress, two known triggers of the condition. In one test, women were asked to describe traumatic episodes that caused an attack. As the women described their experiences, researchers found a rise in blood pressure as well as a loss of the body’s ability to calm itself down.

As researchers found, a commonality between 10 women in the group, who had previously experienced a broken heart syndrome attack, suffered from an impaired parasympathetic nervous system. As in, the body’s part of the nervous system that’s responsible for telling the body to calm down wasn’t doing it’s job correctly. In short, it overwhelmed the system.

Because broken heart syndrome mimics heart attack symptoms such as chest pains and shortness of breath, doctors have been prescribing beta blockers in efforts to prevent it from happening again. As many have believed, beta blockers would be helpful in controlling adrenaline and other hormones that might potentially cause the pain. However, the use of beta blockers in treatment has yet to prove effective.

According to a July 2015 University of Michigan study, in 2012 there were 6,230 cases of people in the U.S. hospitalized with broken heart syndrome in the U.S. Although patients usually heal within days or weeks without any real damage to the heart, complications can occur as well as death. Good news is, death is very rare.

Researchers believe the best way to prevent an attack is to practice breathing and relaxation techniques. As Reynolds told the Wall Street Journal, “We know that it improves parasympathetic functions ... We need to enhance the mind-body relationships.”

As tragically romantic as it is, you really can die from a broken heart. Here are four other things you should know about broken heart syndrome:

1. Women Are More Likely To Experience It Than Men

A 2015 Binghamton University study found that women suffer more pain after a breakup than men do. So, it's maybe no real surprise that broken heart syndrome mostly affects postmenopausal women. In fact, close to 90 percent of cases reported were by women between the ages of 65 to 70-years-old. But that doesn’t mean others aren’t affected. According to Science Alert, as more people have become aware of the condition, cases are being reported in younger men, women, and even children.

2. It's Triggered By Stress

As it's widely known, nothing good can come out of stress. According to the American Heart Association, the surge of stress hormones caused by an emotionally stressful event can lead to sudden intense chest pain. Stressful events include deaths of loved ones, divorce, breakups, or romantic rejection. Physical stress from strokes, epilepsy or acute medical illnesses can also trigger it. Weirdly enough, it can even happen after a “good shock” like winning the lottery.

3. The Most Common Signs Are Chest Pains And Shortness Of Breath

These symptoms can occur even if the patient has no history of heart disease. Irregular heartbeats and cardiogenic shock can also occur. That happens when the heart fails to pump enough blood throughout the body. If not treated right away, it could be fatal.

4. It Is NOT A Heart Attack

Although it mimics a heart attack, it is not a heart attack. In fact, broken-heart syndrome has been commonly misdiagnosed because symptoms and test results are fairly the same. However, unlike a heart attack, the heart arteries aren’t blocked. Blood flow to the arteries, however, is reduced during an attack.