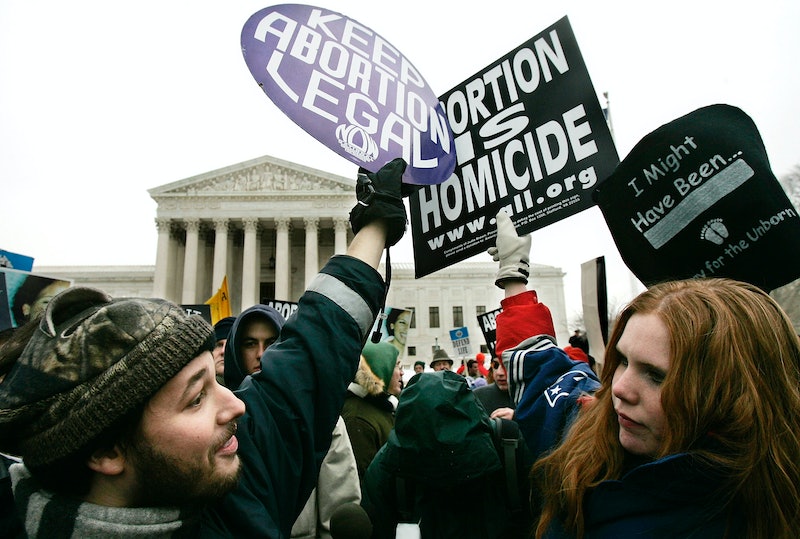 Today marks one of the most divisive dates in the American calendar year. It's the 41st anniversary of Roe v. Wade, the landmark Supreme Court decision that opened the door for legalized abortion in the United States. It's the day that activists on both sides point to polls as evidence of a country that supports them, even as both sides' analysis is often erroneous. On Jan. 22, some celebrate a landmark moment for women's rights, and others brave the cold at D.C.'s annual March For Life rally at the National Mall.

This year, Pope Francis, Sen. Ted Cruz (R-TX.), and Rick Santorum all tweeted their support for the shivering pack of activists at the 40th March For Life event. "We march because 56 million Americans never had a chance to experience snow," March For Life wrote on Twitter. The "59 million" figure is the estimated number of terminations that have occurred in America since Roe v. Wade.

And as the March For Life-rs condemn the iconic Supreme Court decision Wednesday, the other side of the abortion movement continues to loudly celebrate Roe v. Wade. The president's statement this year stands firmly by the decision: "Today, as we reflect on the 41st anniversary of the Supreme Court decision in Roe v. Wade, we recommit ourselves to the decision's guiding principle," reads the statement."That every woman should be able to make her own choices about her body and her health."

But don't be fooled into thinking that anti-abortion activists lost the war 41 years ago. More anti-abortion legislation has been pushed through American states in the last three years than in the decade prior to it, and that legislative red tape has made abortion difficult, if not near-impossible, in many American states. In honor of Roe v. Wade's 40th anniversary last year, TIME wrote an extensive feature on the status of the pro-choice movement in America. The feature noted that the pro-choice movement saw a huge win in Roe v. Wade, but that its been slowly losing battle after legislative battle in the 40 years since.

Part of the reason is that the public is siding more and more with their opponents. Even though three-quarters of Americans believe abortion should be legal under some or all circumstances, just 41% identified themselves as pro-choice in a Gallup survey conducted in May 2012. In this age of prenatal ultrasounds and sophisticated neonatology, a sizable majority of Americans supports abortion restrictions like waiting periods and parental-consent laws. Pro-life activists write the legislation to set these rules. Their pro-choice counterparts, meanwhile, have opted to stick with their longtime core message that government should not interfere at all with women's health care decisions, a stance that seems tone-deaf to the current reality.

This year, as happens each year, conservative media points to a public study to argue that Roe v. Wade is unpopular. Today, the poll that's making the rounds amongst anti-abortion activists is one administrated by the National Right To Life Committee. It suggests that the vast majority of Americans — roughly eighty percent — don't support legalized abortion, though the organization's name alone will hint at exactly what's happened here. As Slate finds in its close examination of the poll, clever wording and a bias towards certain options leans the results heavily towards the pro-life movement, even as objective polls reveal that Americans are split closer to fifty-fifty on the issue.

Polls by Gallup, Pew, ABC, NBC, and the AP typically reveal the same roundabout conclusion: Americans generally feel conflicted about abortion, and grow more morally conflicted depending on how far along the mother is. But most, if not the vast majority, support the right of a woman to make her own decision about a termination, with the help of her doctor. And in close to 50 years, these numbers haven't really changed.

This isn't to say that the majority of America is pro-choice. As the Atlantic writes Wednesday, many Americans hold contradictory views about abortion, with some identifying as both pro-choice and pro-life, depending on the circumstances. But the two sides of abortion activism often don't take those nuances into consideration, and so when polls emerge, the opinions of those in the middle can be sidelined into either "pro-choice" or "pro-life" categories. As TIME's feature puts it:

As memories of women dying from illegal pre-Roe abortions become more distant, the pro-choice cause is in crisis. In 1973, female lawyers from the Center for Constitutional Rights said Roe v. Wade was "a tribute to the coordinated efforts of women's organizations, women lawyers and all women throughout this country." Writing a new playbook for the pro-choice cause--one that ensures that Roe is not overturned and that access to abortion is preserved and even expanded--would require the same kind of coordination. If abortion-rights activists don't come together to adapt to shifting public opinion on the issue of reproductive rights, abortion access in America will almost certainly continue to erode.