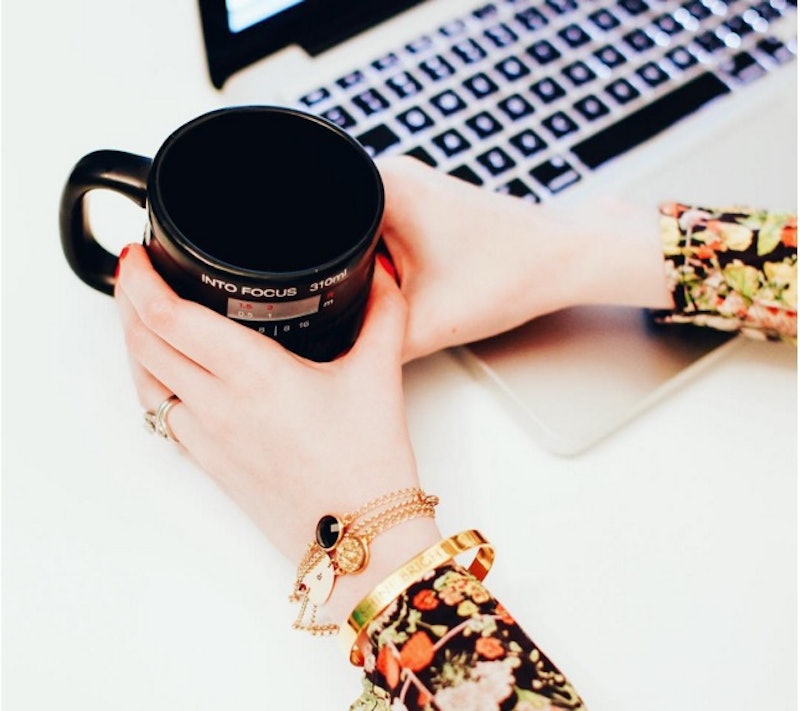 When you're looking for a new gig, it can become extremely easy to fall into an I-can't-do-this slump. So you need to dig up ways you can stay positive during a job hunt because, in the end, no matter how long it takes, you'll land something. While it can be tempting to break down into a pity party and stress-eat Chipotle while thinking up of those blasted cover letters, you have to keep your chin up. Which, I know, is much easier said than done. Especially when you're onto sending out your 45th resume and scheduling in your hundredth interview. Things can seem pretty dire at that point, and like all that hard work is for naught. But that's just you getting exhausted — your burn out doesn't mean there isn't that job out there waiting for you.

While it can seem like you'll forever be chained to that entry level position you have when your applications for job listing after job listing get turned down, all you have to do is remember that every failure is just another chance to succeed. Below are seven ways you can trick yourself into keeping a great attitude during your search— remember, don't give up.

It can be hard to feel productive when you wake up at noon and stay in your jammies all day long, sending out resumes in between Bob's Burgers reruns. That doesn't necessarily give you "I've got my life together" feels. So instead, create a strict nine to five that'll have you feeling like you're part of the workweek, just like the rest of the employed crowd.

Susan Mayes Ostrander, career writer at career development site The Muse suggested, "Set your alarm for a reasonable wake-up hour each morning and — as tempting as it is to become one with those comfy PJs — shower and dress yourself in something a bit more formal (jeans?) to trick your brain into thinking that it’s time to get down to business." By taking off those pajama bottoms and waking up at a reasonable hour, you'll start your day feeling like you've got this productivity thing on lock.

But seriously, giving up just shouldn't be an option. How will you pay your rent? Will you move back with your parents? Are you not going to try and make your career into something wonderful? Even though it can feel super hopeless and hard, just take "giving up" completely off the table.

Lifestyle writer Kayla Matthews at Huffington Post pointed out, "There’s a lot of stiff competition out there and not getting an interview or not getting hired for a job doesn’t necessarily mean that you are unqualified or inferior in the grand scale of the job market. It just means the job didn’t work out this time." So hang in there! You can acknowledge the fact that this time sucks and is super hard, but also remember that better, more exciting days are ahead. You just have to have the patience and grit to reach them. So keep going; keep slugging through. You're almost there.

Just randomly deciding to reply to three job applications a day isn't necessarily what you call a "game plan." And if you don't have goals set for what you want to accomplish during that particular day, it can be ridiculously easy to slide into an unemployment slump of binge watching cancelled TV shows and falling down a Facebook rabbit hole. So set yourself goals you need to reach every day to make sure you keep up momentum.

Ostrander offered, "Decide on an appropriate start and stop time for the day, jot down a list of goals (i.e. 'follow up with three companies' and 'send resume to that cool art start-up'), and structure your schedule accordingly. Having a to-do list and sticking to it will make you feel like you’re making good progress." Give yourself some solid structure and you'll feel like you're really using your time wisely.

4. Focus Only On The Stuff You Can Control

As frustrating as it could be not to receive a single email after a week of replying to 30 job applications, you shouldn't waste energy worrying about the stuff you have no control over. Instead, put all your time and energy into the stuff you can.

Career writer Jennifer Foss told The Muse, "Focus your energy instead on what you can. Literally, make a list of the aspects of this job search that you can influence or impact. Maybe you decide to call that person at your dream company who your friend knows. Maybe you figure out—once and for all—how to use LinkedIn to your advantage." By taking the lead in aspects that you can control (emailing connections you have; asking to grab coffee with a viable mentor) you can feel like you're not just waiting till something or someone to grab the bait.

5. Use This Time To Acquire Some Cool New Skill Sets

Whether you've been underemployed for three weeks or three months, you can turn that downtime into productive time by treating it as a chance to brush up on new skills. Career writer Jacquelyn Smith from Forbes pointed out, "Sixty-one percent of the hiring managers surveyed recommended taking a class during a period of unemployment."

Employers like to see that you kept busy while waiting for your next break. So cruise through industry articles, sign up to online courses that are relevant to your field, learn a new language (when isn't that handy?) or master a skill you haven't had the time to do when you were hustling through your nine to five.

While falling into a Desperate Housewives viewing party is hella tempting, try to channel that time into strengthening your resume instead.

6. Turn This Hard Time Into A Game

The application process can be a grueling time, but maybe it can become a little more lighthearted and interesting if you put a competitive edge to it. For example, Floss pointed out, "When survivors of major catastrophes are interviewed, it’s not uncommon to hear that they attribute their ability to stay alive to gamification. They didn’t panic, nor give up. Rather, they navigated through the situation as if they were playing a game of strategy, one that they intended to win." So do the same thing. Strategize on how you can get emails back, or phone interviews scheduled. See every reply as a tallied point, and let your competitive side fly but turning it into a contest.

7. Bite The Bullet And Network

The majority of us don't love the idea of networking, because it conjures images of evenings spent over stiffly throwing elevator pitches to strangers over plastic glasses of wine. And while, yes, that can be painful, meeting someone face to face and impressing them can give you a real leg-up in the hiring process. Careerealism, a career development site, pointed out, "Maintain contacts and stay in touch with people. Make sure you network with positive people!"

You don't necessarily have to go to those big group meetups to network — instead, ask an industry insider to coffee or try a fun event where you know a lot of the industry insiders will attend (i.e. if you're a writer, go to a book reading.) You never know who will be willing to hep you get an in.

So, hang in there. Even though that application process can be hard and grueling, you have what it takes to make it out on the other side.