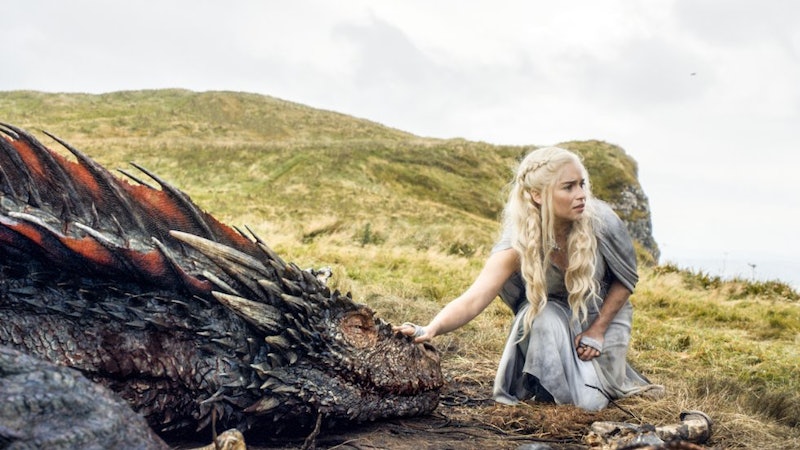 Through five seasons and three years of nominations in the Best Television Series, Drama category at the Golden Globes, Game of Thrones has time and time again lost to more prestigious TV dramas — in 2012, the series ceded the prize to Homeland, and in 2015, to The Affair. Though it's one of the most-watched — and the most consistently good — dramas on air right now, it's often, like Mad Men before it, overlooked in favor of other, shinier, newer shows. Yet, among a crop of competitors including Outlander, Mr. Robot, Empire, and Narcos, 2016 looked like it might finally be the year for Game of Thrones. But, alas, it was not to be — Daenerys and company will have to wait for future seasons because Game of Thrones was snubbed for the 2016 Golden Globe for Best Original Television Series, Drama, in favor of Mr. Robot.

Game of Thrones has finally surpassed its source material — it has caught up with George R.R. Martin's series, A Song of Ice and Fire, from which the title of the series is drawn. (A Game of Thrones is the first novel in the series.) Even though it didn't win this year, perhaps future series, which will be drawn from the show creators' imaginations, will prove to the Hollywood Foreign Press Association that the series is really worthy of top honors. There's always next year — and given the seemingly limitless extent of George R.R. Martin's imagination, and of the Game of Thrones showrunners, there may be many years after that. And better yet, perhaps the HFPA is waiting to see if Jon Snow makes a welcomed return to the series — because really, who isn't?

Mr. Robot was a sleeper hit this year, but it's been nearly universally acclaimed and the Golden Globes have a history of honoring the the underdog. This is not to detract from that series' win — and even without the Globes win, Game of Thrones already possesses an impressive roster of Emmy wins. Game of Thrones has won Emmys every year since it first went on air, receiving awards that include everything from visual effects and camera work to the performances by its core cast. There's no doubt that Thrones is a worthy winner — perhaps next year, the series will finally get the recognition at the Golden Globes it deserves.