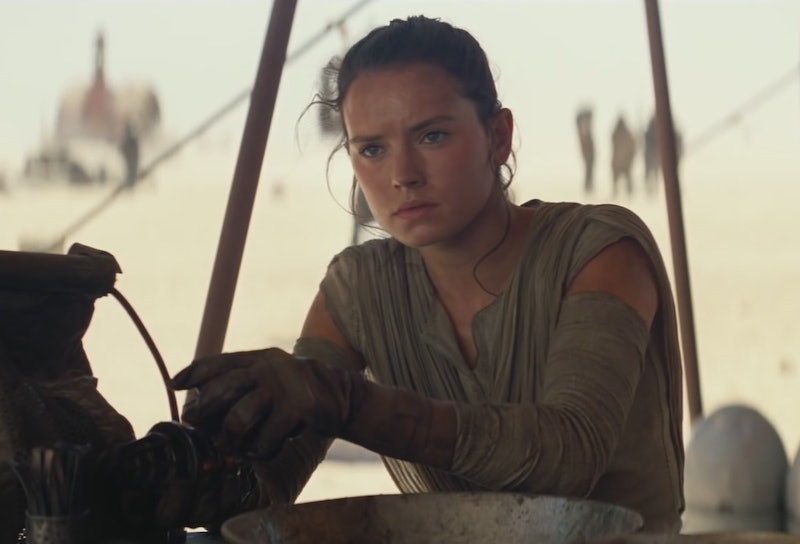 Back in the day, a galaxy far, far away was definitely man’s world. Female Star Wars characters in the original trilogy and even in the prequels were few and largely insignificant, aside from a couple of major exceptions. But The Force Awakens has given a new hope to Star Wars fans who’d like more even representation in the franchise’s universe. I hope that once this new trilogy is complete, a list of consequential female Star Wars characters will be much longer and certainly more diverse.

In the meantime, it’s important to recognize and celebrate what’s amazing about the few women who do run in the Star Wars gang. Hasbro’s recent promise to add Rey to future batches of its The Force Awakens -themed Monopoly game after outrage over the character’s absence went viral proves that making noise does make a difference, and while some female Star Wars characters are more fully developed and exciting for feminist viewers to watch than others, they're all important to note. Below are the nine women who've come through the cinematic Star Wars universe over the years, ranked by character development from least to most. May this field be much more crowded (especially at the top) in a couple of years.

The Sand People's stolen droids get more character development than Aunt Beru. She shows up briefly in Revenge Of The Sith to take a bundle of baby Skywalker out of Obi-Wan's hands. And in A New Hope, Beru only has time to nag her nephew about his future before she's burnt to a crisp by the Empire.

She beats Beru in screentime, but Anakin's mother is relegated to the saintly martyr role. She works herself to the bone to support her son, sends him off to be a Jedi, and then is killed to push him onto the path to the Dark Side. What really needs to die is this trope of women losing their lives just to give male characters feelings.

Another casualty of Skywalker man-pain. (Do dude characters ever have to die "of a broken heart"? I don't think so.) Padme is perceptive and strategic in her work as a leader, but she has the blind spot the size of Naboo when it comes to Anakin. #YesAllJedis

For ladies in the Star Wars universe, maybe being bad is just more fun. Zam Wesell is a ruthless, professional assassin who's hired to take out Padme in Attack Of The Clones. She's sacrificed to the narrative too, but at least she gets to shut down a mansplaining Jango Fett before she does. And she can shape-shift.

What I love most about this shriveled space pirate is that Maz Kanata has clearly lived. You've got to be some kind of intergalactic big deal to be the person Han Solo goes to for help. I want to know everything about her. May the next two episodes bring tales of Maz's legendary past.

"Development" can't always be defined for Star Wars films the same way it is for other movies. Captain Phasma barely speaks and doesn't have much of a discernible personality. But she shows the progression of the franchise's attitude towards gender by being a recognizably (yet not at all feminized) female character in a role that would normally be filled by a man.

Is there a Mon Mothma fandom? Can I be in it? The Rebel Alliance never would have gotten off the ground, let alone defeated the Empire, if peace-loving Mon Mothma hadn't been around. The prequels gave one of the universe's few satisfying origin stories to the military leader briefly seen laying out the strategy for the Death Star attack in A New Hope. She's calm, smart, and all-around awesome.

Speaking of crucial members of the Rebel Alliance: Leia. The Princess of Alderaan stands up to torture, delivers vital military secrets, actively participates (at the very least) in her own rescue, and never stoops to play the wilting flower. And that's just in the first movie. When Luke and Han meet Leia, she's angry, defiant, and desperate to bring down the Empire. As the original trilogy moves forward, she finds a center through their friendship and the camaraderie of the Alliance, without ever losing her verve. She's got the poise of a royal and the guts of a general, even after all these years.

Everything about Rey makes me want to stand up and cheer. The Force Awakens introduced a female protagonist who's treated fairly by the story and played to perfection by newcomer Daisy Ridley. Rey's value isn't just found in her talent for directing the Force. Her first adventure proved her to be empathetic, brave, and just a little bit haunted. Her costumes aren't sexualized. She's not immediately thrown into a romantic relationship. She's allowed to just be, and that's so meaningful to fans of all ages and genders.

More like this
Who Is Liam Neeson's Character In The Obi-Wan Kenobi Finale?
By Kadin Burnett
Everything To Know About Obi-Wan Kenobi Season 2
By Kadin Burnett
Everything You Need To Know About The 'Knives Out' Sequel
By Grace Wehniainen
The 'Hocus Pocus' Sequel Finally Has A Release Date & It Makes Total Sense
By Shannon Barbour and Radhika Menon
Get Even More From Bustle — Sign Up For The Newsletter