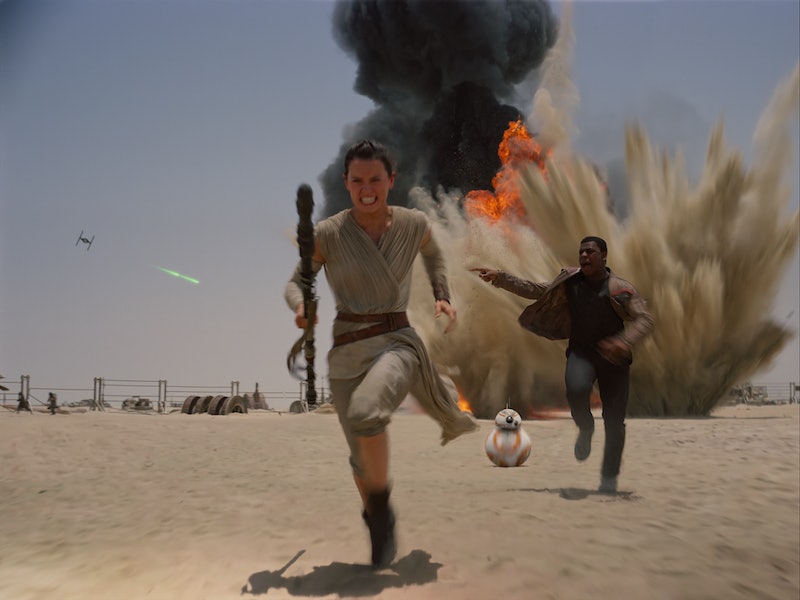 Now, you might not have heard the name "Daisy Ridley" up until recently, when Star Wars: Episode VII—The Force Awakens details were released, but know this: Star Wars star Daisy Ridley will become a household (in galaxies both near and far) soon. The British newcomer, only 23 years old, was thrust onto the scene in a massive way when she was cast as Rey for the epic franchise's newest installment. And now, before the film's even premiered, she's already making waves. Case in point: Ridley is on the cover of Elle 's December issue, where she opens up to the magazine about her first ever film role during an exclusive interview. (You read that right. Not only is The Force Awakens Ridley's first large scale role, it's her first actual role.)

A certain air of confidence and poise leaps from the two dimensional cover as the young British starlet is dubbed the "new siren of Star Wars" by Elle. Taken literally, "siren" could be an insinuation that Ridley is loud — a force (pun intended) to be reckoned with. Or, figuratively, an allusion to the mythological "siren," a woman who lures men to their death by singing to them. (Signifying a change in the mostly predominate male cast of Star Wars, perhaps?) Either way, there's something compelling about the cover girl. Ridley is someone worth paying attention to, not because she's the new girl of Star Wars, but because, according to the show's director, J.J. Abrams, she's "the face of the new Star Wars," and a symbol for the franchise's feminist growth.

J.J. Abrams and the Star Wars co. have been keeping plot details about the new film under wraps, but, if speculation is correct, then Rey will become the franchise's first ever female lead. There have been women within Star Wars, of course — most notably being Princess Leia (played by Carrie Fisher) and Queen Amidala (played by Natalie Portman). The former role is part of the "Original Trilogy" made in the '70s/'80s, and the latter was a character in the "Prequel Trilogy" of the (mostly) 2000s.

Carrie Fisher's Princess Leia serves as an interesting precursor to Rey in particular because she created the archetype for Star Wars women. For the late '70s, during the pinnacle of second-wave feminism, Princess Leia was a pillar of hope. She had agency amongst her male counterparts, and, most of the time (despite the infamous gold bikini scene), she wasn't explicitly dressed. If you watch the film back now, you'll note that, overall, Princess Leia didn't wear her sexuality on her sleeve. It just so happens that the scene Fisher became so famous for was the bikini one, because, well, the audience in 1977 wasn't yet privy to the idea of a non-objectified heroine.

Just recently, at the end of October, Ridley interviewed Fisher for Interview Magazine. When asked for advice, Fisher said, “Well, you should fight for your outfit. Don’t be a slave like I was…You keep fighting against that slave outfit.” "All right, I'll fight," Ridley tells Fisher, but in 2015, Ridley doesn't have to fight against that slave outfit, because the women before her already have. Fisher did when she became the only notable woman from the Original Trilogy, and Portman did when she played the political savvy Queen Amidala. The previous Star Wars ladies have oscillated between powerful and powerless, devoid of sexuality and sexually objectified, as they tried to find a place to stand within the franchise. Through that struggle, they set the foundations for a character like Rey.

So, when Ridley subsequently tells Elle for the December feature, "[Rey is] so strong. She's cool and smart and she can look after herself. Young girls can look at her and know that they can wear trousers if they want to, that they don't have to show off their bodies," the Star Wars paradigm shift not only becomes clear, it becomes necessary.

As an audience, we want women with backgrounds, stories, and complexity. J.J. Abrams knows that the gold bikini isn't needed to attract audiences, mostly because the audience itself has changed. With films like The Hunger Games dominating the box office, it's clear that female-centric plots are not only compelling, they are desired. Required even. Ridley, as the face of the new, possibly female-led Star Wars installment, could not have been casted at more pivotal time for women in film, and I'd like to think this is no accident.

Because, as Elle puts it, while Ridley is certainly "ready to be a new kind of role model," I think more importantly that we, as audience, are finally, finally ready for her.