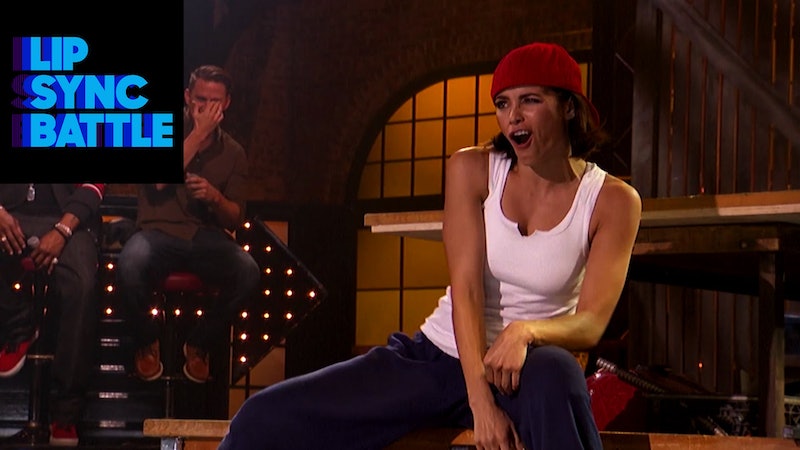 Let's just be real here — Jenna Dewan-Tatum is as close to physical perfection as you can find on this planet. She also happens to be close to perfection in every other way, as well: she's an incredibly talented actress and seems like an amazingly down-to-earth human being, to boot. In other words, she's amazing — and she just got even more awesome, if you can believe it. Dewan-Tatum will appear on the January 7 episode of Lip Sync Battle, where she and husband Channing Tatum go head-to-head in a battle to determine who the best lip sync-er is, and from the looks of things, the Mrs. is probably going to come out on top.

In a new promo clip released ahead of Thursday night's episode of the popular series, Dewan-Tatum can be seen performing one of Channing Tatum's most famous numbers from the Magic Mike movie to Ginuine's "Pony", and the results are incredible. Not only does Dewan-Tatum have the moves, but she's also got the six pack abs, not to mention her husband on board to serve as a willing recipient of her lap dance. I don't know about you, but my vote is on her, hands down.

Straight out of the gate, Dewan-Tatum has got all kinds of swagger that's just downright intimidating to witness. The way she just leans down and scans the audience, full of confidence and attitude... I mean, I'm already blown away.

Whatever This Move Is

I'm not really sure what's happening here — it's like she's waving a cock's comb on her head or something while she wildly shakes her leg like a dog being scratched in just the right spot. Whatever's happening, I like it, and I'm confused and slightly terrified in it, but I'm still into it.

It takes a lot of nerve and some pretty strong knees to do a floor slide like that, but Dewan-Tatum makes it look effortless and pain-free, to boot. The attitude's still going strong, the moves are smooth... get it, girl!

I mean, ignore the hands down the pants situation (or don't... whatever floats your boat) and just admire the washboard abs on Dewan-Tatum. I mean, that's admirable to say the least. They're at least as defined as Channing Tatum's. Do they work out together? Ugh, they're the worst/best.

What's better than all of the above clips? Seeing Mr. and Mrs. Tatum get together for a little naughty dancing. I love it!

Watch the full video below, and make sure to tune in for the actual full performance on Thursday, January 7.