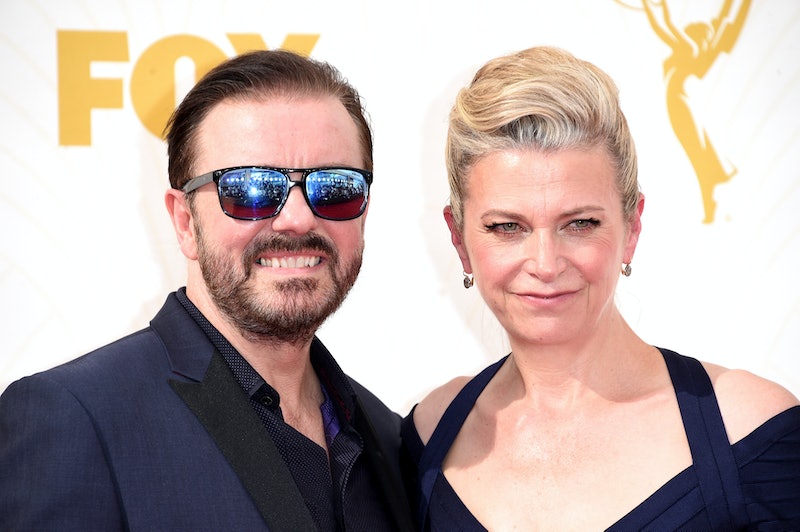 British comedian Ricky Gervais is known for his edgy sense of humor, his creation of (and starring role in) the U.K. version of The Office, and that one time he voiced a dolphin on an episode of Family Guy. And as he prepares, once again, to take the stage as host of the 2016 Golden Globes, it looks like all eyes are on the ~controversial~ comedian as he makes his way across the pond to Californ-i-a on Sunday, Jan. 9. But perhaps it's also time that Americans become familiar with other aspects of Gervais' life, like the fact that his longtime partner Jane Fallon, who has been in a relationship with Gervais since meeting at college in 1982, is a total badass in her own right. Who is Jane Fallon, you may ask? Well, my friends, take this time to educate yourself.

Fallon, who is a frequent Tweeter equipped with the same raucous sense of humor as Gervais, is a best-selling author in the U.K. According to her Twitter account, her "chick-lit"-genre novels are all Top 10 bestsellers (holla) and seem like books that I would totally devour — regardless of the author's fame. Like her most recently released novel, Strictly Between Us, which, judging by its Amazon description, sounds something entirely up my alley:

Tamsin and her best friend Michelle have been inseparable since they were teenagers. Even now they spend all their time together, along with Patrick, Michelle's handsome husband.

So when Tamsin hears a rumour that Patrick is having an affair, she is furious. Unwilling to ignore it, Tamsin plots a scheme to catch Patrick in the act, using her assistant Bea as live-bait. It should be fool proof.

After all, Tamsin can trust Bea with anything. From her daily coffee order to fetching her dry-cleaning, writing reports and doing all the filing — Bea does everything with a smile on her face.

Except Tamsin never considered Bea might have her own agenda.

And if she does, then Tamsin really needs to watch her back...

Drama, intrigue, lies, and a sneaky-ass best friend? Sign me up.

Before she became a best-selling author, Fallon, now 54, also achieved great success as a producer, working on shows such as EastEnders (a popular, long-running British soap on which she worked for almost a decade) and Teachers. This is, of course, according to Fallon's IMDb, which unfortunately doesn't include things like her hilarious sense of humor. But fortunately, that's what Twitter is for, so I present you with this:

And in case you haven't noticed, Fallon and Gervais do things entirely on their own terms. Which means that, no, they are not getting married, and no, they are not having children — two decisions that they are 100 percent in agreement about.

"I remember steeling myself, trying to imagine what I would do if he'd had a change of heart," she recalled to Marie Claire about the final discussion she had with Gervais about the idea of having children. "I was so convinced of my decision [not to] that I couldn't even imagine the alternative. It turned out he had been having the same anxiety about me. Cue much relief and celebration."

Ah, a couple that is on the same page about the big issues: Sounds like a perfect match to me.