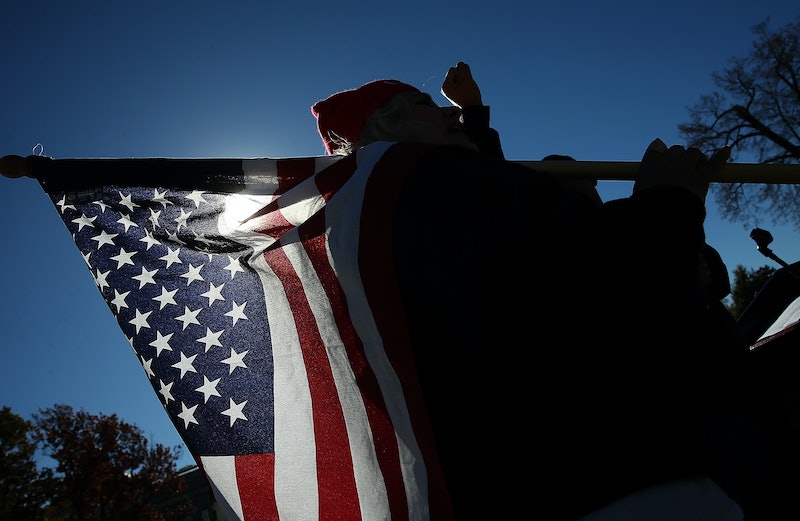 Americans are angry, says the "American Rage" survey by NBC News and Esquire. In fact, not only are American angry, but that feeling seems only to be intensifying — half of the respondants said that they are angrier today than they were a year ago. So what is making Americans so angry? According to the survey, a lot of things... although they might not be what you're expecting.

It's worth noting when we talk about "American rage" that the study focused on what makes people angry politically, which may or may not affect how they feel in a day-to-day interpersonal sense. It's unclear whether Americans are walking around just feeling generally angrier today than this time last year, though of course it's possible. But what makes people angry in a political sense is still important to note. After all, anger is a powerful motivator, and oftentimes people made angry by political issues can express that not just by voting or organizing around an issue, but also things like beating up people who disagree with you or an armed take over of a federal building.

So what exactly are American angry about? Well, unsurprisingly, after sifting through data from over 3,000 respondents to their online survey, NBC and Esquire found that different groups are angry about different things. Here are six interesting findings from their report.

1. The News Makes Almost Everyone Angry A Lot

A total of 68 percent of Americans say they hear or read something in the news at least once a day that makes them angry — and 31 percent, almost a third of all Americans, say they find news stories that make them angry more than once a day. Honestly, I've never seen such a convincing argument for people having a designated "no media" day. Then again, I'm probably one of those people who gets angry because of the news multiple times per day, and I don't plan on changing anything, so there you go.

2. The Biggest Topics That Make People Angry Might Surprise You

It's unsurprising that things like Congressional disfunction are among the issues that make many groups most angry, but there are also some surprising topics. For instance, despite the fact that the Republican presidential primary has so far actively avoided discussing Black Lives Matter, 65 percent of Republicans say that the shooting of unarmed black people makes them angry — and 84 percent of Democrats say the same. Additionally, for all the arguments that people like Kim Davis represent a silent majority, far more people in this survey say they feel angry about the way LGBT people are treated in America (41 percent) than say they support Kim Davis (24 percent).

In other words, it's not all that surprising that Americans are angry, but what they get angry about doesn't always line up with conventional wisdom.

3. White People Are Angrier Than People Of Color

Speaking of conventional wisdom, the stereotype of "black people getting angry for no reason" doesn't really hold true either (which seems like it should be obvious, because stereotypes are... well, stereotypes). In fact, the truth is just the opposite. Despite the fact that white people have more wealth, higher income, more opportunities, more political power, and more representation in all forms of entertainment media than any other racial or ethnic group in the country, the survey found white Americans are angrier than people of color in this country. The researchers write that this seems to be a matter of "perceived disenfranchisement — a sense that the majority has become a persecuted minority, the bitterness of a promise that didn't pan out — rather than actual hardship."

(Additionally, it seems Republicans are also angrier than Democrats, which is fairly unsurprisingly given the fact that the Republican party is disproportionately white.)

4. Women Are More Likely To Be Angry About Treatment Of Others

5. Women Are Also Angry About The Way We're Treated

While women are more likely to be angry about injustice for many other groups in America, we do still get plenty angry about the way we are treated, too. 48 percent of women say that the way women are treated makes them angry. And, interestingly, 49 percent of women say they associate the term "feminism" most strongly with the word "equality." So don't believe the hype — the fight for gender equality is still plenty strong.

6. There's At Least One Thing That Makes Virtually Everyone Angry

For all the things that divide us, however, it seems there is at least one thing that makes virtually all Americans angry: school shootings. In the survey, participants gauged their anger in response to a variety of fake headlines, including things like "Bill Cosby Cleared Of All Charges"; "CEO Resigns, Admits To Massive Consumer Fraud"; and "Caitlyn Jenner's Wedding Of The Century!" And while opinions varied widely on most of these, it seems that there's one headline that angers virtually everyone: "School Shooting Leaves Six Dead, Nine Wounded."

A total of 91 percent of respondents reported feeling either "very" or "somewhat angry" in response to this headline, and in fact this pattern held over all demographic groups. No matter what their race, ethnicity, gender, or political affiliation, over 90 percent of people are angered by school shootings, which the report notes is "about as close to unanimous as you can get in America."

Which also suggests that instead of trying to play on people's sympathy in pushing for gun control reform, maybe we should try tapping into a little of their anger. Just a thought.

You can find more of the many fascinating findings from this report here.

More like this
10 Times Boris Johnson Got It Wrong On Trans Rights
By El Hunt and Sam Ramsden
How To Fight For Reproductive Rights, Based On How Much Time You Have
By Courtney Young
LGBT+ Men Fleeing Afghanistan Were Denied Asylum By The Home Office, New Findings Show
By Sam Ramsden
How To Protect Your Digital Privacy If You Need An Abortion Post Roe v. Wade
By Kaitlyn Wylde
Get Even More From Bustle — Sign Up For The Newsletter