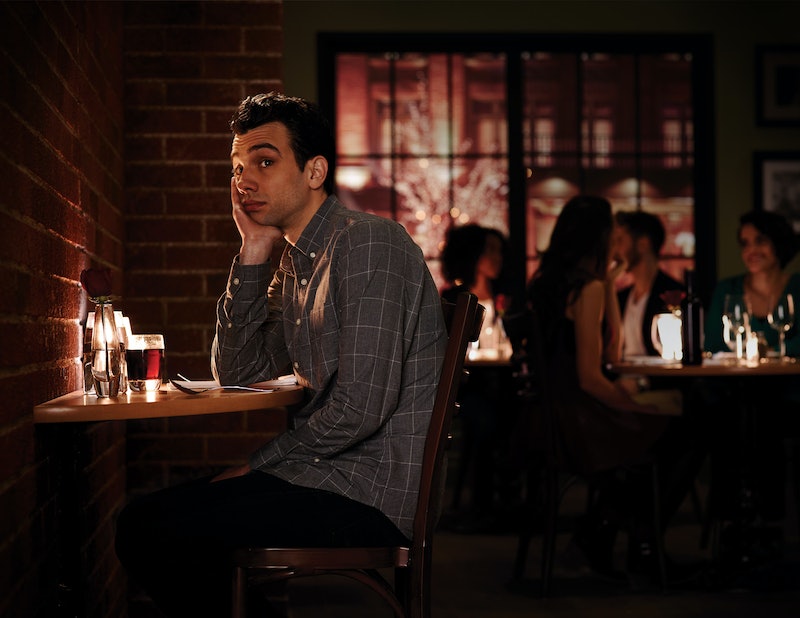 The series premiere of Man Seeking Woman featured, among other things, a post-breakup raincloud following main character Josh, a date with a literal troll, and going to a party with Josh's ex's new boyfriend — Adolf Hitler. Needless to say, Man Seeking Woman is a weird show, and in an interview with Bustle, creator Simon Rich makes it clear that he wouldn't have it any other way. Season 2 of the FXX series will premiere on Jan. 6 at 10:30 p.m., and Rich reveals that just like last season, the show will explore different facets of love and dating through absurdity, and keep breaking the traditional "rules" of sitcoms with every episode.

"In 2016, Audiences are extremely savvy and are willing to accept less naturalistic content in a live-action sitcom as opposed to 10 or 20 years ago," Rich says. The writer attributes his willingness to get weird with his love of animated comedies, pointing out that "Homer Simpson actually goes to space. Kenny [of South Park] actually dies in most episodes." Man Seeking Woman often feels like the most animated non-animated show on television, willfully tossing reality to the wind and introducing a full war room filled with generals and scientists debating on the perfect text to ask someone on a date, or meeting a new partner's ex-boyfriend who happens to be a literal Japanese penis monster.

"My goal was always to try to create a sitcom that was as surreal and absurd as some of my favorite sketch shows. Mr. Show, The State, Kids in the Hall.," Rich says. "We always try to take big swings."

While Rich is proud of Man Seeking Woman's weirdness, he also doesn't let such moments take away from the reality of the situations that the characters are going through. "We hope that at its core it’s emotionally honest and resonant," he says. "The biggest compliment we can get as writers is when someone sees the show and goes 'Oh yeah, sh*t I’ve been there.'"

As Season 2 approaches, Rich is especially looking forward to using the series' absurd segments to explore the characters internally. "This season, we work hard to portray these characters with a little bit more depth. Viewers will learn this season that Mike’s macho pose is very much a façade that he uses to mask a lot of extreme vulnerability," he says. "Josh, for all his politeness, has some flaws as well that makes him different than what he actually thinks he is. He will make mistakes, and face consequences." Trailers from Season 2 also suggest that Mike's loneliness will be focused on when he becomes the "next of kin" after an army representative alerts him that Josh will be unavailable to hang out — because he's gotten a girlfriend.

And just like Rich and the series' other writers embrace weird content, they're also very willing to play with structure. One of the standout episodes from Season 1 turned the show into Woman Seeking Man, as it explored dating and relationships from the perspective of Josh's sister, Liz. It seems that this experiment paid off, as Rich reveals that this season, fans can expect "several episodes featuring non-Josh protagonists, including more than one with a female protagonist." He attributes the decision to shift perspectives to the fact that "The show doesn’t have any B-plots." He continues, "We can’t really cut away from the protagonist. What we can do is switch up the protagonist. It was really important to us to tackle dating from multiple points of view."

In its shifting perspectives, structural switch-ups, and overall weirdness, Man Seeking Woman is pushing the definition of what comedy is, and what stories it can tell. While this may risk putting some viewers off, Rich aims to find the perfect amount of oddity. "Hopefully we don’t get too obscure. We try to make it less weird, but we always fail," he says. "Once you pop the Japanese Penis Monster, ya just don’t stop."

More like this
Lydia Leonard Is Setting The Record Straight
By Olivia-Anne Cleary
The Time Traveler’s Wife Book Has A Heartbreaking Ending
By K.W. Colyard
‘SNL’ Referenced Jesse Williams’ Broadway Leak In A Chaotic Theater Sketch
By Grace Wehniainen
Selena Gomez’s ‘SNL’ Hosting Debut Had Twitter Gushing Over ‘Barney’ & Wigs
By Stephanie Topacio Long
Get Even More From Bustle — Sign Up For The Newsletter