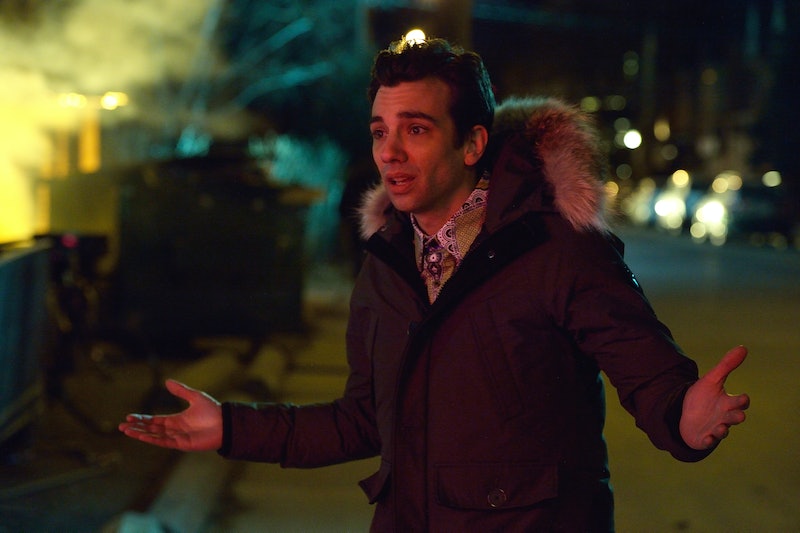 Jay Baruchel has been pretty busy making movies recently, but he's returning to TV for the new series Man Seeking Woman. In a phone interview with reporters on Jan. 9, Baruchel spoke to Bustle about whether his new FXX series Man Seeking Woman is feminist. A title like Man Seeking Woman could potentially raise eyebrows, but Baruchel put any fears of misogyny to rest (not like I would have expected that from Baruchel anyway). "I think all of the characters, regardless of their gender, are pretty interesting and well-defined," Baruchel said.

For those who have seen the previews for the show and noticed that his character Josh goes out on a date with an actual troll (or have seen this force field clip), may still not be convinced. And Baruchel is aware of how some characters may fall into familiar roles that we've seen played out on TV before. "Obviously, because of the nature of our show, and how strange it is, there are some kind of archetypal characters at different times," he said. But that shouldn't stop you from tuning in.

"As you'll see if you keep watching, the title even becomes malleable. Man Seeking Woman just happens to be the story of a man, but I think the stories are pretty universal, so it could very easily be Woman Seeking Man," he said. "Without giving too much away, it might turn into that at some point." Oooo. Interesting.

Baruchel even went as far as to say that the show is "100 percent feminist-friendly." Following up with, "I think it's just friendly to smart people."

And a smart show is my kind of show — and really all that I can ask for. The nature of a series or movie being feminist-friendly doesn't mean that the story has to revolve around women. It just needs to not make stereotypes out of all of its female characters and use them solely for punchlines. And honestly, all entertainment should aim for treating all of its characters that way. (Respect your damn characters!) Although, in comedy in particular, a lot of times certain roles are just be there for a laugh — male or female. But that doesn't have to mean it's anti-feminist.

"The show is about human nature and what it is to be single — and to be one of these social animals we call humans," Baruchel said. And if you're worried that the premise may be too generic — don't be (seriously). Although love is frequently explored in entertainment, the bizarre and wacky scenarios in Man Seeking Woman are truly unique. (Just check out the source material, The Last Girlfriend on Earth , by Simon Rich.)

"I’m so thoroughly convinced that there’s really nothing like it on television," Baruchel said. And from what I've seen so far, I'm more than inclined to agree.

Check out the new series for yourself though and be the judge. Man Seeking Woman premieres at 10:30 pm on Jan. 14 on FXX.