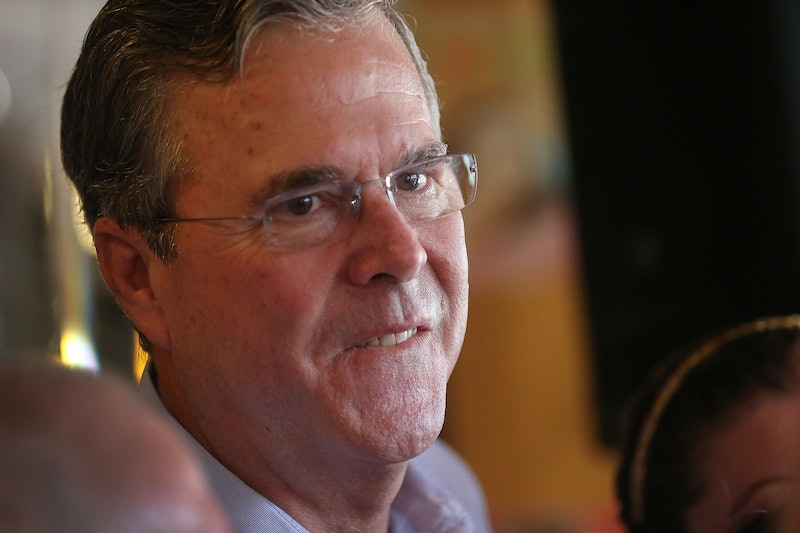 With the Iowa caucuses rapidly approaching, the entire Republican field is still jockeying for position. Between a sorely bloated field and the unexpected rise of Donald Trump, there are definitely some candidates who started with high expectations, but have been left out in the cold so far. And on Tuesday, a certain former Florida governor showed precisely how desperate he's starting to feel: Jeb Bush joined Snapchat.

Look, there's no real mystery in what's happened to him so far. In a GOP primary in which political experience hasn't mattered much, and plenty of (relatively) middle-of-the-road candidates like Chris Christie and John Kasich along with more charismatic firebrands like Ted Cruz and Marco Rubio, there's just no oxygen left for Jeb! 2016. And, of course, you've got the whole Trump thing — even when he's factually in the right, Jeb just can't seem to emerge from any confrontation with the Republican frontrunner without seeming at least a little humiliated.

But now, he's apparently got a dynamite plan to win back his credibility. Just Snap your way to success! On Tuesday, the Jeb Bush campaign called out on Twitter for anyone who was interested to follow them on the image-based social media network, and the early results are ... well, take a look for yourself.

Get it? It's New Hampshire, and it is cold. If there's any strategic issue here, it's probably that Jeb doesn't gain much by juxtaposing himself against that cute little snowman. After all, you don't want your candidate to be upstaged in their own campaign content, and frankly, that guy's doing a little too much work in this picture. Think about it: who's got the more authoritative posture? The more charismatic political brand? The greater abundance of energy, commitment, and moral courage? Damn, can the Republicans just run the snowman instead!?

This one's simple enough, and sure, at least there's no INCREDIBLY COMPELLING PRESIDENTIAL SNOWMAN this time. But this kind of highlights the dilemma for Jeb ― where's the winning in this whole Snapchat thing, exactly? If I want a picture of him looking neutral with his hands folded, there are plenty of places to find those that don't require a login screen. I suppose they could've moved the "New Hampshire" logo down and to the left a bit, so that the antlers framed Jeb's head as though he were a moose, but then his face would be blotted out by the text. Presidents never have their faces blotted out by text.

And finally, of course. It should come as little surprise, given the obvious struggles he's had with gauging the current political climate, but Jeb closing out his day by referring to the media as his "friends" is still a pretty startling misreading of what's playing in the Republican primary right now. Although in fairness, maybe the kind of young conservative who wants to follow Jeb Bush on Snapchat actually wouldn't be bothered by that. And maybe there are enough of those kinds of people to vault him into first place in the upcoming Iowa caucuses. Almost anything's possible when you put the word "maybe" in front of it, right?