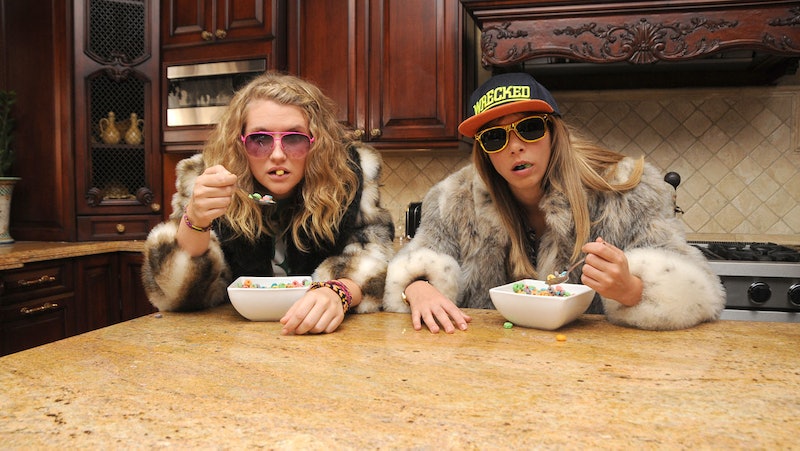 Comedy Central never fails to give audiences something to laugh about, and the network's latest offering comes in the form of female buddy comedy Idiotsitter , starring Jillian Bell and Charlotte Newhouse. The 10-episode series was created by the two women, who are best friends in real life, and centers around two people who couldn't be more opposite. One is a cash-strapped, Ivy League graduate looking for work, and the other is a spoiled heiress under house arrest in her father's mansion. The series also features Stephen Root (Boardwalk Empire) and Jennifer Elise Cox (The Brady Bunch Movie) as the heiress' parents. Randall Park, Andrew W.K., and Chris Klein will also guest star.

In an exclusive clip from the show we see Billie (Newhouse) arrive at a mansion for a job interview to be the new babysitter. Little does she know, the child she thinks she would be watching is actually a grown woman, ironically named Gene (Bell), on house arrest. Rolling in with a shirt that says "dong" with an arrow pointing downwards, and a potty-mouthed vocabulary, Gene is anything but well behaved. Watch the series premiere of Idiotsitter Jan. 14 at 10:30 PM on Comedy Central. Watch the exclusive clip below: