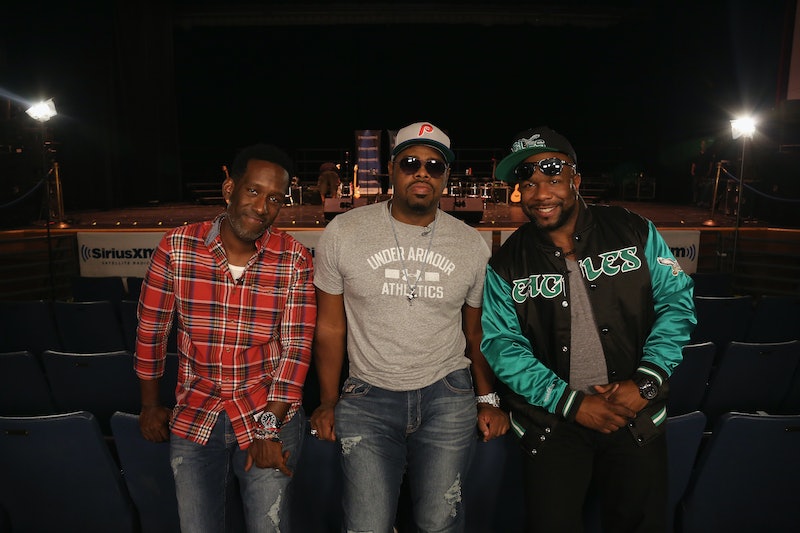 Grease: Live keeps getting better and better as the weeks move forward. On Wednesday it was announced that Boyz II Men will play Teen Angels in Grease Live, the FOX production that everyone can't stop talking about. The musical will star Julianne Hough and Aaron Tveit as Sandy and Danny respectively, and their crew will be made up of a variety of different stars. From Vanessa Anne Hudgens and Keke Palmer to Carly Rae Jepsen and Carlos Pena, there is no shortage of surprising cast picks for this play. However, no cast announcement was more exciting than the news that Boyz II Men would be lending their angelic voices to the show.

Their characters, the Teen Angels, may not be as memorable a part of the cast in the film as Sandy or Danny, but, when Boys II Men puts their fresh twist on it, they just might steal the show. The Teen Angels appear to Frenchy when she needs a little help with a problem she's facing. The group released a teaser on their Twitter account to announce the good news, and proved that after all these years — they've still got it! They sang a little rendition of "Grease is the word" that will make your heart melt. They will bring a lot of soul to the part.

Unlike many of their fellow boy band counterparts, Boyz II Men has been keeping a steady flow of music coming since the early '90s — including lending their vocals to some well received tracks, like Justin Bieber's 2011 Christmas album Under the Mistletoe, where they can be heard on the track, "Fa La La." Although they originally gained fame as a quartet, Michael McCary had to leave the group in 2003 due to health issues. Since 2003, they have been a trio composed of Nathan Morris, Wanya Morris, and Shawn Stockman. They haven't slowed down a bit in over 20 years, and released an album in 2014.

Hopefully, their new role will inspire another album in the new year, because the world is in need of some soulful love ballads from the group who gave us, "End Of The Road," and "One Sweet Day." FOX knows great casting when it comes to their programming, so Grease Live is going to be a tough standard to beat by any station. It premieres Sunday, January 31 on FOX.