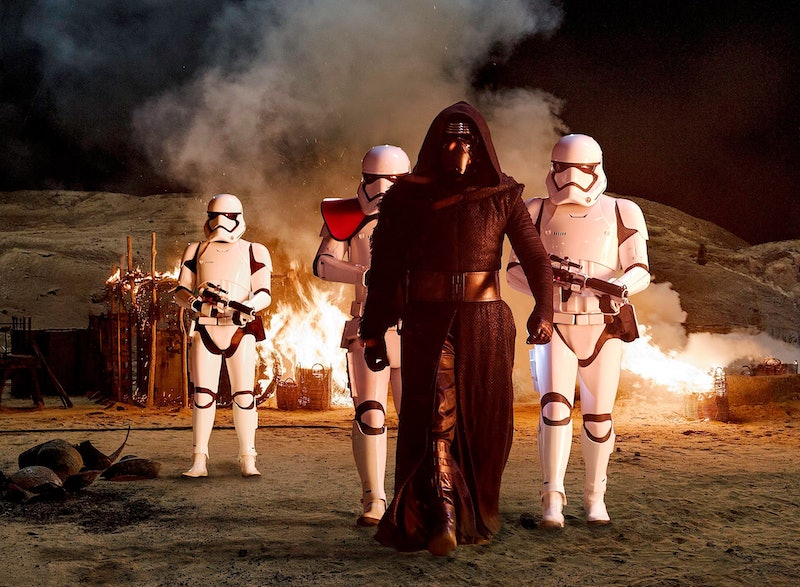 There was one pop culture event that sent 2015 into a frenzy, and no, it wasn't Justin Bieber's comeback album or even the birth of second Kimye baby Saint West. The release of Star Wars: The Force Awakens sent everyone flooding to the movie theaters (with tickets that they bought weeks and weeks in advance) and brought together film junkies looking for the latest awesome cinematic spectacle with diehard fans of the original flicks. The new Star Wars movie proved that the franchise — much like the Millennium Falcon — still has the ability to soar in 2015. Want proof? Just head to Twitter for a collection of hilarious Star Wars parody accounts that will remind you that there's humor in even the baddest of Star Wars villains.

While some of the stuff that happened in the new Star Wars flick is no joke (like, say, *that* Han Solo scene that had audiences cursing at the big screen and reaching for their Kleenex) anyone can laugh at some of the ingenious ways that these hardcore fans poked fun at these iconic figures. Also, all of these accounts poke fun at Kylo Ren's apparent affinity for Hot Topic and boxed hair dye, so really, you can't go wrong with any of them. Check them out:

*SPOILER ALERT* When we saw Luke in The Force Awakens, he wasn't exactly surrounded by hundreds of his nearest and dearest Jedi friends. Instead, he looked... well, a tad lonely. (And very, very bearded.) Parody account Very Lonely Luke not only understands all of Luke's lonely feels, but also yours. Except for all of the mentions of him kissing his sister, of course.

I was hoping that Han Solo's "cool guy" demeanor would translate to him being a super fun, "hip" father that would take his kid cruising around the galaxy. Alas, that wasn't in the stars: Han didn't exactly win any parenting awards in the years between Star Wars films, and the Bad Father Han parody account explains why.

Poor, sad, Kylo just has way too many feelings and also Jimmy Eat World albums. While a Tumblr may have been more appropriate for Kylo, the parody account Emo Kylo Ren tweets out his most angst-ridden thoughts from the dark side in 140 characters or less.

If Kylo has a lot of feelings, then this parody account Supreme Leader Snoke proves that this Star Wars villain has an awful lot of frustrations. I mean, he does have to put up with Kylo, so.

And expect even more great accounts to pop up during the months leading up to the next Star Wars movie, Rogue One.

More like this
Lisa Marie Presley Reviewed Baz Luhrmann’s ‘Elvis’ Movie On Twitter
By Grace Wehniainen
What Does Doctor Strange’s Third Eye Mean?
By Arya Roshanian
Elizabeth Olsen's Chris Evans Friendship Update Was Accidentally Hilarious
By Grace Wehniainen
Wait, Did Wanda Die In 'Doctor Strange And The Multiverse Of Madness'?
By Arya Roshanian
Get Even More From Bustle — Sign Up For The Newsletter