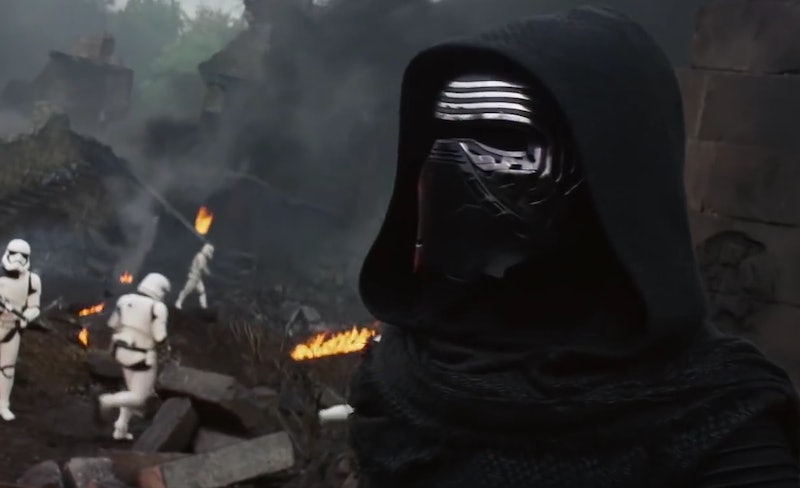 Two weeks after walking into the movie theater to see Star Wars: The Force Awakens on its opening weekend, I returned for my second viewing. Yes, I know, what took me so long? But, in my defense, having some distance from the film gave me time to choose a few Force Awakens theories upon which to focus my energies the second time around. After reading fan theories about Rey being Luke Skywalker's daughter and obsessing over the inevitable beauty of FinnPoe, I went back to The Force Awakens determined to find evidence to support the theory that Kylo Ren might actually be a good guy. The theory, which suggests that Kylo Ren has not truly fallen to the Dark Side, but is instead attempting to defeat the First Order from within, has its flaws, to be sure. But after watching The Force Awakens for the second time, I have to say, it's completely workable within the canon set up in TFA. Spoilers ahead!

The Kylo Ren theory came from a viral Tumblr post that suggested, in short, that Kylo Ren is only pretending to be part of the Dark Side in an attempt to get close to Supreme Leader Snoke and kill him. The original theory used Kylo Ren's confession scene to Darth Vader's helmet as evidence, noting that, instead of Kylo Ren asking his grandfather to guide him to the Dark Side, he could be gathering courage to "finish what you started" — meaning destroying the darkness. Furthermore, the theory proposes that Kylo Ren, aka Ben Solo, had to kill Han Solo (or "Dad" as Kylo refuses to call him) to prove his loyalty to the Dark Side. It is only after he kills Han in a clearly emotionally difficult scene that Kylo Ren is summoned to Supreme Leader Snoke to "complete his training."

In re-watching The Force Awakens, I noticed that these plot points do, in theory, make sense. Both Kylo Ren's confession to Darth Vader and his confrontation with his father are emotional scenes in which Kylo Ren admits to being pulled apart — drawn to the Light and the Dark, unable to get a grip on who he is and what he believes he needs to do. It's a tragic fate he never asked for. Those born with the Force, it seems, have no choice but to be constantly pulled between good and evil, and Kylo Ren is no exception. The killing of his father would be exceptionally compelling if Kylo Ren turns out to be a good guy. It would make Han Solo's death a crucial moment for the Resistance, instead of a dramatic plot device used to illustrate Kylo Ren's allegiance to Snoke.

Huge plot points aside, there are also a few smaller signals that Kylo Ren might really be good. For one thing, he appears to have a contentious relationship with Gernal Hux, his fellow First Order leader. Ren and Hux clearly don't like each other very much, and it doesn't seem like Hux trusts Kylo at all, and vice versa. Kylo is careful not to let BB-8 and the map to Luke Skywalker be discovered by anybody in the First Order other than him. He wants to be the one to find the map and find Luke. This could simply be because he wants to kill him, but it could also be Kylo Ren's way of protecting his uncle and former mentor.

There's also the fact that Kylo Ren objects to Snoke and Hux using the Starkiller weapon to attack the Republic planets, and later the Resistance base, where he knows his mother is leading the troops against the First Order. Why object unless he doesn't want his mother to die? You might be thinking that that's all well and good, but Kylo Ren still jammed his crossguard lightsaber straight through his father's chest. And, you'd be right. When I first read the Kylo Ren is good theory, I thought that Kylo's actions in the last act of The Force Awakens completely negated the theory. Putting aside the fact that he kills his own father, he then goes after Rey and Finn. Picking a fight with Rey and Finn completely voluntarily, right after killing his father doesn't really make Kylo Ren look like a good guy. That, to me, remained the biggest piece of evidence to contradict the Kylo Ren theory.

Upon second viewing, however, I was able to slightly amend the theory to make Kylo Ren's actions somewhat plausible as actions of a good guy. Kylo Ren is established as being extremely volatile. When confessing to Darth Vader, he asks his grandfather to show him "the power of the Dark Side" specifically, and earlier in the film he is prone to fits of rage when things don't go his way. Emotionally drained after killing his father, Kylo Ren might have fallen prey to his inner Dark Side, causing him to fight Rey and Finn.

Another interpretation could be that Kylo Ren never wanted to kill his father, and blamed Rey and Finn for bringing Han to Starkiller Base in the first place and setting Han's death in motion. Is this a stretch? Yes, but it does make some sense, especially considering the staging of the scene. Kylo Ren stands alone on the bridge after killing Han, and looks up to see a shocked Finn and Rey. His face immediately contorts in anger, and he chases them into the snowy forest where their final battle takes place. The way the scene is set up suggests that Kylo is acting impulsively, and that challenging Finn and Rey was simply a knee-jerk reaction to having just killed his father. Whatever the reason for the fight, Kylo Ren's inner conflict is clear throughout the battle. He repeatedly hits his wounded side, where Chewie shot him with a blaster, a clear sign that he might not be in control of his actions.

It should also be noted that Kylo Ren fails in killing either Finn or Rey. He could have stabbed Finn through the heart, but leaves him with (apparent) flesh wounds instead. He doesn't kill Rey, and tries to recruit her to his side. What if he wasn't trying to win her over to the Dark Side, but trying to convince her to join him so that he could have an ally on the inside with him?

The details — both large and small — that I noticed upon my second The Force Awakens viewing point to one thing: Kylo Ren could be, at the very least, a malleable character that could easily switch to the Light Side in Episode VIII. He might not be completely Dark or Light at this point, but I wouldn't be surprised if he ended up fighting with his mother for the Resistance.