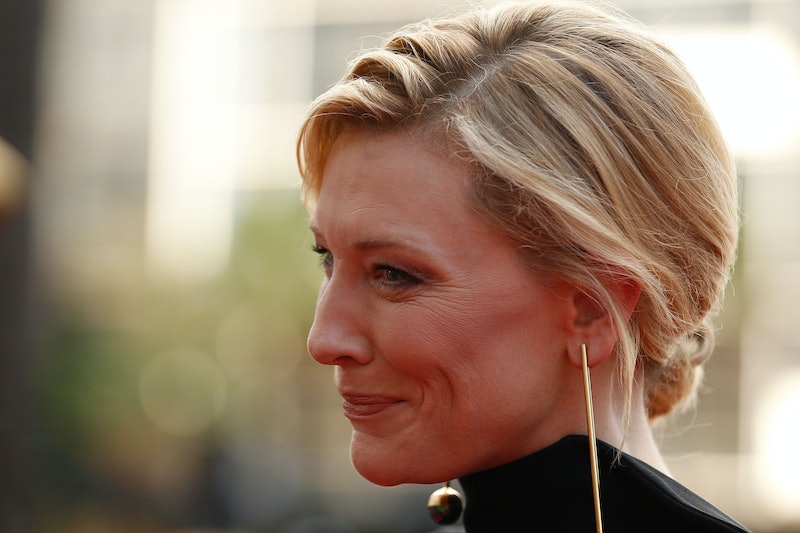 Two of the most powerful female film performances of 2016 are Brie Larson in Room and Cate Blanchett in Carol. Both women were nominated for Golden Globes for these memorable performances, but Brie Larson took home the award for Best Performance by an Actress in a Motion Picture — Drama on Sunday. Other actors nominated in the category include Saoirse Ronan for the immigrant story Brooklyn, Rooney Mara — also nominated for Carol — and Alicia Vikander in The Danish Girl. Needless to say, the category boasted entirely award-worthy women.

All of these women produced powerful performances in important cinematic stories. Carol surrounds Blachett's Carol, a married woman in the 1950s who falls for a young, female photographer. The film itself is subtle, muted, and romantic, but as always, Blanchett delivered a heartbreaking and striking performance. Of course, Blanchett is a veteran when it comes to award shows, having been nominated for 156 awards, and winning 138 of them, according to IMDB. In 2014 she took home the award in the Best Performance by an Actress in a Motion Picture — Drama category at the Golden Globes, as well as the Best Actress award at the Oscars the same year for Blue Jasmine.

Brie Larson lies on the opposite end of the spectrum, as 2016's nod is her first Golden Globes nomination. 2015's Short Term 12 earned her a few smaller nominations and win, but 2016 is Larson's first year under the big award show lights. Room follows a teenage girl (Larson) who is kidnapped and held in her captor's shed for seven years. She has a son with her captor, and on her son's fifth birthday, she plans an escape with his help. The story is gorgeous, heart-felt, and gut-wrenching, and it's apparent why Larson took home the award for her moving performance.

Congratulations to all of the nominees!