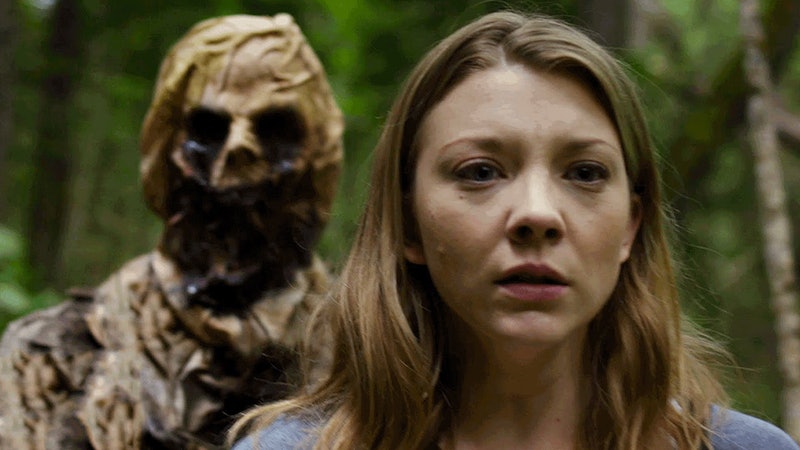 Horror movies have the power to make us afraid of plenty of not-so-creepy scenarios, like getting a new doll (thank you, Child's Play) or spending your Friday night babysitting (thank you, every '80s slasher flick ever.) Of course, then there are the horror movies in which the setting is already ripe with creepiness, no convincing required. That is the case with Natalie Dormer's new horror flick, The Forest, in which the titular location is the movie's greatest scare factor.

The supernatural film, out Jan. 8, tells the story of Sara (Dormer), whose identical twin goes missing after traveling to a forest in Japan where people go to commit suicide. Sara decides to venture into the suicide forest herself, and there she confronts unimaginable terrors while attempting to learn the truth about her twin. But is this purely a work of fiction, or is The Forest based on a true story? The uncomfortable answer is that it's both.

The forest itself is very much a real place. It's called Aokigahara, and it is also known as the "Suicide Forest" or the "Sea of Trees." As the movie's trailer states, Aokigahara is at the base of Mount Fuji, and people really do go there to commit suicide (though whether it's due to demonic forces depends on your belief system). Though we may never know the reasons that suicidal people choose to make Aokigahara their place of death, the numbers of them who do are staggering. In 2002, an alarming 78 people reportedly committed suicide there.

One theory as to why Aokigahara became a popular place for suicide is that it's a case of life imitating art. Seicho Matsumoto’s 1961 novel Nami no To (Tower Of Waves) features a couple who commit suicide in the forest. It's only after the book was published that the forest saw a spike in suicides. Later, author Wataru Tsurumi called the forest the "perfect place to commit suicide" in his 1993 Japanese bestseller The Complete Manual of Suicide.

But could there be a darker reason that Aokigahara is so popular? It depends on who you ask. Though Sara's story is a work of fiction, it is inspired by real Japanese mythology — the kind that will make your hair stand on end. According to legend, the forest is haunted by "yurei (Japanese ghosts or spirits). Some guardians of the forest are so convinced that the yurei haunt these woods that they will choose to sleep next to the body of a suicide victim, believing that if the body is left alone, it will haunt more aggressively. And seriously, no one has time for an aggressive ghost.

While The Forest may not be based on any real, specific story, it is a new spin on existing mythology. Whether Aokigahara is really haunted, however, is up to you to decide for yourself.

More like this
Lisa Marie Presley Reviewed Baz Luhrmann’s ‘Elvis’ Movie On Twitter
By Grace Wehniainen
The 'Thor: Love and Thunder' Trailer Finally Shows Christian Bale As Villain Gorr
By Grace Wehniainen
Sadly, 'Fantastic Beasts: The Secrets Of Dumbledore' Isn’t Streaming — Yet
By Arya Roshanian
Laura Dern Said “Cultural Awareness” Made Her Rethink This 'Jurassic Park' Fact
By Grace Wehniainen
Get Even More From Bustle — Sign Up For The Newsletter