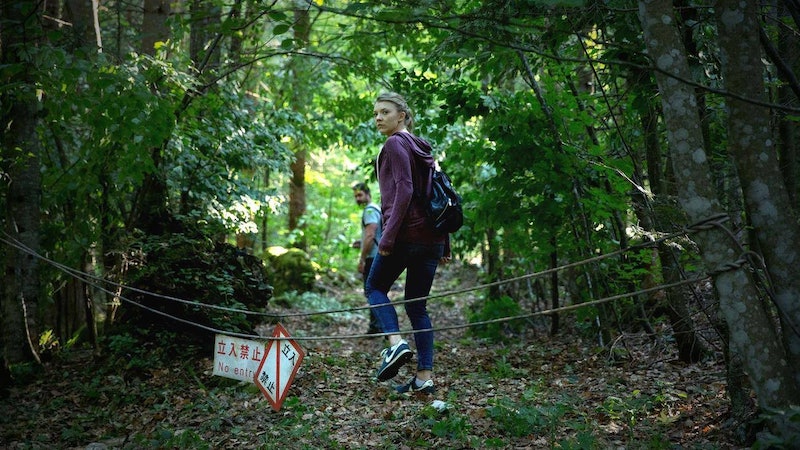 If you got a phone call telling you that your identical twin had disappeared in Japan's Aokigahara Forest, commonly known as the Suicide Forest, would you drop everything and travel there to try to find him or her? In The Forest, Natalie Dormer's character Sara does just that after she senses her sister, Jess, is in trouble. While The Forest may seem like your typical campy horror flick about a woman who puts herself in the path of vengeful ghosts and spirits lurking in a foreign land, it's actually based on some truth. That's right, the Suicide Forest in Japan is real, and, yes, it is exactly what it sounds like.

The Suicide Forest, officially called Aokigahara Forest, rests just below Mount Fuji in Japan. Densely populated with thick, leafy trees, the forest is known for being so dense that there are places beneath the trees where the sun can't reach. It is also known as being the second most popular place to commit suicide in the entire world — the first is San Francisco's Golden Gate Bridge. The exact number of suicides committed in Aokigahara per year is unknown, but is believed to be well into the double digits — a reported 54 bodies were discovered in the forest in the year of 2010.

The forest didn't become a popular place to commit suicide until the 1960s, after the release of a popular book titled Tower of Wave, which featured a suicide in the Aokigahara Forest. Another book, The Complete Manual of Suicide (1993) from Wataru Tsurumi, called the forest the "perfect place to die." Due to its proximity to Mount Fuji, as well as its density, navigation inside the forest using a compass is difficult, and it's no doubt this fact has made the forest a site for much paranormal discussion for years.

As the Suicide Forest, also known as the Sea of Trees, or the Yukai Forest, gained popularity among the suicidal, it also became the subject of several supernatural stories. Thus, the forest has become a hot spot for curious travelers and ghost hunters in addition to the usual hikers, and, of course, those who do go to the forest to end their life. Some believe that the Suicide Forest is full of Yurei — or the Japanese cultural version of a ghost or spirit. One promotional image for The Forest invokes the Yurei, reading, "The Yurei will find you, make you see things and make you want to die. You do it yourself."

The Forest isn't the only film to take inspiration from the Suicide Forest. At the Cannes Film Festival in 2015, director Gus Van Sant premiered his newest film, The Sea of Trees , about a man played by Matthew McConaughey who enters into Aokigahara Forest with the intention of killing himself. Still, despite the Suicide Forest being real, I'm pretty confident in saying that The Forest's supernatural story is most definitely not.