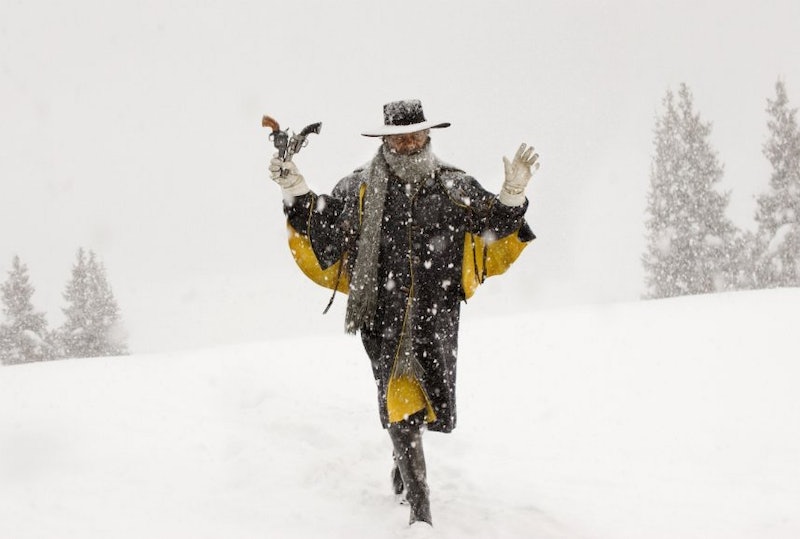 In a jacket pocket over his heart, Samuel L. Jackson's Hateful Eight character Major Marquis Warren carries a letter he purports is from President Abraham Lincoln himself, one of the few surviving correspondences between Warren and Lincoln from the Civil War. Warren isn't shy about revealing his precious cargo. He flaunts it before fellow bounty hunter John Ruth (Kurt Russell); he shares it with Sheriff Chris Mannix (Walton Goggins); and he even allows prisoner Daisy Domergue a peek at its contents. (She quickly loses the privilege when she hocks a giant spit onto the letter.) Warren notes that the letter is his insurance policy, a voucher of instant respect among white peers in the still segregated aftermath of the Civil War. But some characters — mirroring some audience members — doubt the letter's authenticity. So is the Lincoln letter in The Hateful Eight real?

Well, no. In one of The Hateful Eight's closing punch lines, Warren reveals to Mannix that the letter was really just his insurance. He never really corresponded with Abraham Lincoln, though Lincoln did write letters to army leaders and to the mothers of soldiers who died in the war. He also received correspondence from constituents — including a letter from the mother of a man in the 54th Massachusetts Colored Infantry demanding that Lincoln protect black servicemen. But, as is often the case in Quentin Tarantino's movies, the actual history is tangential to the plot he's devised. Race relations in the aftermath of the Civil War are one of the primary undercurrents of The Hateful Eight, and it takes place in a society still steeped in xenophobia, but that's crystallized on an individual level with the Lincoln letter. Real or not, it does afford Warren a measure of respect that he might not receive otherwise from his white peers.

Back in early 2014, the original screenplay for The Hateful Eight leaked online and Tarantino subsequently vowed he would not make the film. He instead elected to bring it to several publishers to be made into a book, Cinema Blend wrote at the time. He staged a reading of that version of the script in April 2014 and announced that he would be making the movie after all, but with a new ending. "The ending needs some work,” Collider reported Tarantino telling the audience, “and so the entire fifth chapter will be changed." The first four chapters, Collider wrote, are nearly identical in concept and execution as that original draft, but there are some key differences between the conclusions in both versions — the Lincoln letter is just one of them.

The original Hateful Eight screenplay leaves Mannix as the last one standing, rather than Warren as in the movie. And, as Collider described, it formerly concluded with a massive shoot-out, rather than the decisive individual killings of the film. The exposition — Daisy's explanation of her involvement in the Domergue gang, the various inhabitants of Minnie's Haberdashery turning on each other — that fleshes out the film's conclusion was a late addition. Among that exposition is Warren's confession that he forged the letter. The forgery wasn't revealed to its full extent in the original screenplay, but in the final draft of The Hateful Eight, Daisy exploits Warren's perceived abuse of Abraham Lincoln's name to turn Mannix against a potential ally, and hopefully save herself.

Mannix isn't the eventual victor of The Hateful Eight as he was in its early phases, but he is the only one whose deceit remains ambiguous at the end of the film. The Lincoln letter both reveals the extent of the racist undercurrents in the film and in the aftermath of the Civil War and discredits Warren. Yet the deception was so skillful that Mannix cannot help but respect Warren's forgery. He praises Warren's use of Lincoln's wife Mary Todd's name to sell the letter to its reader — a poignant detail that would hook potential doubters. As Screen Rant explained, the new conclusion allies Mannix and Warren, and instead of one man left standing in the rubble of a shoot-out, the two men, one black and one white, are the unexpected deliverers of justice. They hang Daisy Domergue, and it could all be because of the reversal of the Lincoln letter.