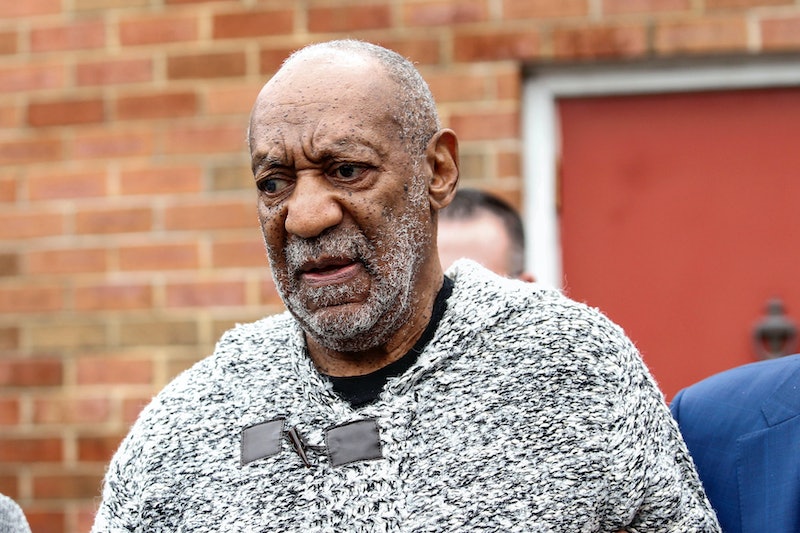 On Wednesday, it was confirmed that Bill Cosby will not face criminal charges from the Los Angeles District Attorney. The investigation, which could have resulted in the charges, stemmed from two women who both claimed Cosby sexually assaulted them. On the report from the LA District Attorney's Office, the two women are listed as Jane Does, but their stories seem to align with those of Cosby accusers Sunni Welles and Chloe Goins. Bustle has reached out to lawyers for both Welles and Goins. While an immediate response was not received from Welles' lawyer at the time of request. Goins' lawyer confirmed through a statement that she is one of the Jane Does. (See full statement from attorney Spencer Kuvin below.)

Los Angeles District Attorney Jackie Lacey's office released a statement Wednesday reading: "After evaluating all potential charges, there is insufficient evidence to prove these crimes beyond a reasonable doubt."

In July 2015, the LAPD confirmed it would pursue any sexual assault accusation against Cosby, no matter the statute of limitations, which is 10 years in California. At the time of this announcement, LAPD spokesperson Norma Eisenman revealed that "there is an investigation open" regarding Goins, who claimed she was drugged and molested by Cosby in 2008 when she was 18 years old at the Playboy Mansion. As for Welles, she alleged in March 2015 that Cosby drugged and raped her in the mid-1960s after they visited a jazz club. Welles was 17 years old at the time of the alleged incident.

Despite Cosby not facing criminal charges regarding these two accusations, he is facing a second degree felony due to Andrea Constand's claim that the 78-year-old comedian drugged and sexually assaulted her at his Pennsylvania home in 2004. At the time of his December 2015 arraignment, Cosby's lawyer Monique Pressley told the Today show, "My client is not guilty and there will be no consideration on our part of any sort of arrangement."

In November 2014, Cosby's former lawyer Marty Singer released the following statement in regards to the claims of sexual assault, when the number of allegations started increasing:

Today’s news from the Los Angeles County District Attorney’s office that Bill Cosby will not face criminal charges in the sexual assault of Ms. Chloe Goins is a disappointment to Ms. Goins and our team that stands behind her. However, we recognize that the bar for criminal prosecution, which is proving guilt beyond a reasonable doubt, is extremely high. We nonetheless commend the efforts of the LAPD and the District Attorney’s office with respect to their criminal investigation.

This criminal investigation did reveal some very important evidence. Most importantly, it uncovered documentary proof that Mr. Cosby was at the Playboy Mansion in early 2008, a time when Ms. Goins was under eighteen years old.

The decision by the District Attorney’s office to decline criminal prosecution of Bill Cosby for the sexual assault of Chloe Goins in no way affects Ms. Goins’ civil lawsuit against Cosby, which is proceeding.