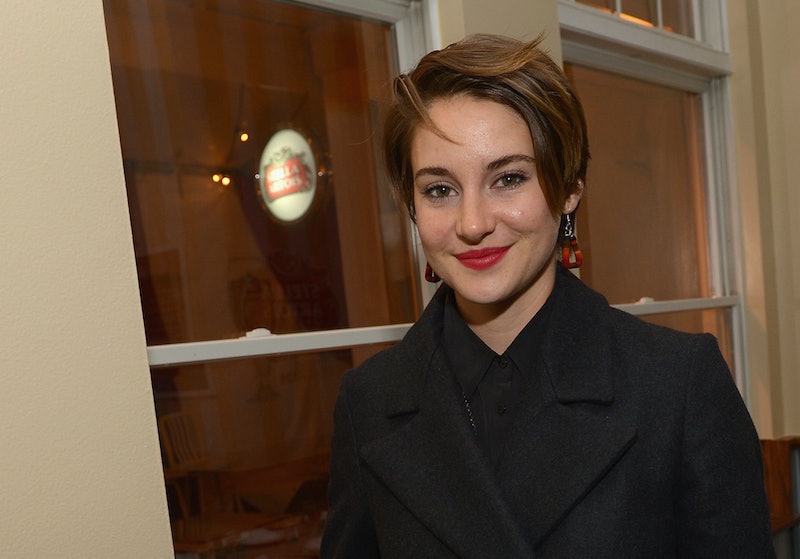 Typically when an actor stars in what's expected to be a huge blockbuster franchise, he/she has a certain personality type: loud, charismatic, and hyper-aware of the culture and what they want in a celebrity. Shailene Woodley, though, is none of those things, despite being on her way to becoming one of Hollywood's biggest stars once Divergent hits theaters in March.

Instead, Woodley is kind of the anti-celebrity, odd and introspective and very, very out of the loop when it comes to pop culture. That's not to say she isn't awesome, because she totally is — with every candid interview and Secret Life of the American Teenager diss, Woodley comes across funny, thoughtful, and honest. Still, don't call her the next Jennifer Lawrence, because Woodley, as she's proved before, isn't exactly "relatable." In a recent interview with The Daily Beast, Woodley showed that she isn't even close to normal when it comes to being a celebrity, or even being a regular 22-year-old. Five quotes:

You know when a TV reporter accidentally spoiled Homeland Season 3 for Jennifer Lawrence and the entire Internet empathized, because we all know how much it sucks to have a major television event ruined for you before you even get a chance to see it? Shailene Woodley doesn't. Because she doesn't watch TV.

2. "Who the hell is Joseph Gordon-Levitt, and why is this guy not in every movie ever?"

To clarify, Woodley does know who Gordon-Levitt is — now. She explained that she only heard of him a few years ago, and was surprised to learn from a friend that the actor was actually very, very, famous. Her excuse was that she doesn't watch a lot of movies, but she has to have seen 10 Things I Hate About You, right? Any thought otherwise is too horrifying to even fathom.

3. "This is sort of a materialistic tradition, but every year for Sundance, my friends and I road trip out here."

Film festivals are all about celebrating low budgets, but that rarely applies for the ways in which celebrities attend them. Woodley, however, actually makes the physical drive to Sundance from Los Angeles, and even then, considers the act "materialistic." It's safe to say there's no private jets in her life.

5. "I love being on an indie set where everyone’s exhausted, no one’s making money, there’s no vanity, and there’s no glitz."

Try to picture Jennifer Aniston, Julia Roberts, or really, any major celebrity saying this, and actually meaning it. Impossible.

1. "Dirty Dancing, for me growing up, was my favorite."

Um, yes. Despite admitting she "doesn't watch a lot of movies," Woodley is thankfully not the only woman in America who didn't fall in love with Patrick Swayze as twelve-year-old.

2. "I still haven’t met her! I’m sure it will happen, and hopefully not in a Hollywood-type environment."

The "her" in question? Jennifer Lawrence. Just like the rest of the world, Woodley is not immune to the powers of the American Hustle star.

Cringing over stuff you did as a 15-year-old? Oh, how we can all relate.