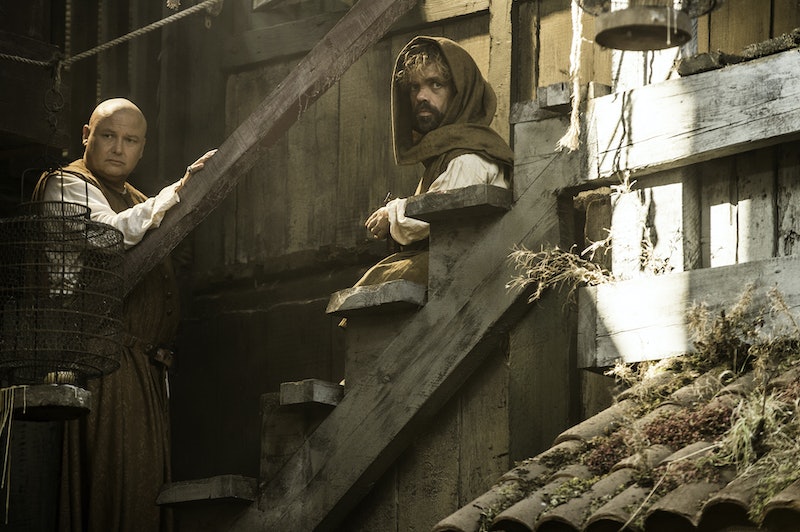 Game of Thrones Season 6 is a'coming, have you gathered up all of your feels yet? Considering how bleak we ended things last year for pretty much all of my favorite characters, I'm not sure if I'm ready for that deep dive back into Westeros. Everyone has been scattered to the winds (of winter), like, what's going to happen to Tyrion in Game of Thrones Season 6? Daenerys may have flown out of the frying pan and into the fire on the back of a dragon, but Tyrion is still very much in the former.

The new season of Game of Thrones is an exciting time for theorizing, because for most of the characters now it's actually a big mystery. Peter Dinklage's Tyrion Lannister has mostly caught up with his book counterpart's journey in George R. R. Martin's story. I know there's a lot of debate over whether or not the show will now spoil the events of The Winds Of Winter, the as yet unpublished novel, and Tyrion is affected by that.

Remember how all of your A Song Of Ice And Fire friends were freaking out when Daenerys and Tyrion met in Meereen last season? That hasn't happened yet in the books. It may not ever happen in the books. Personally, I think that's one of the reasons why it made those scenes so exciting. The Red Wedding was shocking, but there's something kind of fun about all of being on an even playing field in terms of our expectations. There's no telling what exactly will happen to Tyrion next. However, there are a few missing threads from his and other characters that could pop up on the HBO series. Warning, as always, there are spoilers ahead for the Game of Thrones novels.

In the books, Tyrion is traveling with this group, which is similar to Daario's old crew, as a sell-sword. With the war going on in Meereen, this could be a path for him. In the books, the army is attempting to fight Daenerys Targaryen and Tyrion concinvinces them otherwise. Perhaps, in Season 6, he could get them to find the missing Khaleesi instead.

We never met Penny, the female dwarf who Tyrion ends up "performing" with by force. Her brother was slaughtered under Cersei's orders, so I could see Season 6 including her.

One of the most interesting threads in the books is a fellow that Tyrion meets named Young Griff, who claims to be the presumed-dead Aegon Targaryen, son of Rhaegar and truest of all heirs to the Iron Throne. The jury is still out on this guy, and I personally am hoping that he is an Anastasia-like pretender, but it would be interesting Season 6.

As long as he isn't imprisoned again, am I right? In the books, the city is under siege. There's also a dysentery epidemic. However, in the books, the city does not have the governing savvy of Varys and Tyrion. Ser Barristan Selmy, who died on the show, attempts to restore order as Daenerys' Hand. Tyrion, a former acting Hand himself, could assume that role.

Gets Out Of Dodge Entirely

Tyrion could also team up with Varys and head back to King's Landing to start trouble there. In the books, Varys kills Grand Maester Pycelle and Kevan Lannister, who are still very much alive on the HBO series. Perhaps Varys and Tyrion have decided that they've seen all that they need to see in Essos, and head back home. As always, I just hope that Tyrion is a little bit happier in Season 6 of Game of Thrones than he has been in the past, for my sake and his.