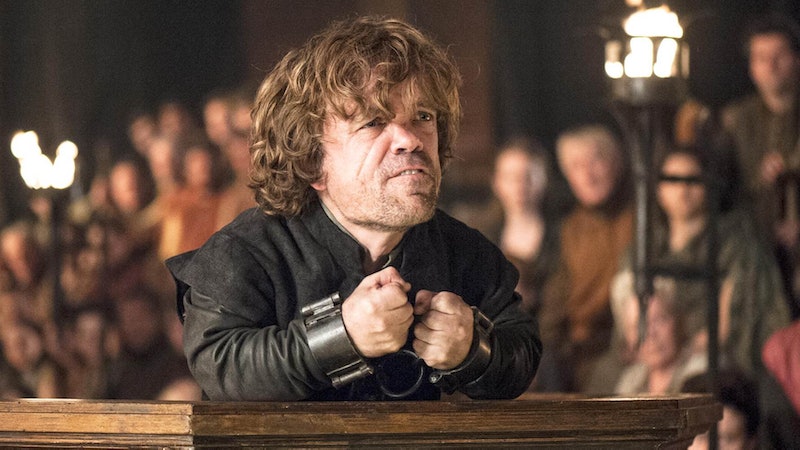 Oh you sweet summer child, what do you know of waiting unless you have endured the long wait for a new season of Game of Thrones ? Winter comes and goes and still there is no sign of Tyrion, Arya Stark, or Dany's dragons. Fans live on nothing but Jon Snow rumors and blurry set photos for months at a time. The nights are dark and full of lesser fantasy shows, and many a person has resorted to watching past seasons on an endless loop until they can no longer take seeing the horrors of the Red Wedding. This is the plight of the Game of Thrones fan. It's not a pretty sight.

Fans must persevere because at the end of the long wait is 10 new episodes of Game of Thrones goodness. Well, I say goodness. Usually it's a mixed bag of emotions ranging from heartbreak to excitement to rage induced vows to quit the show that are retracted by the following Sunday. The emotional roller coaster is all part of the experience and waiting for Game of Thrones is just one more thing that binds fans together.

1. Recovering From The Previous Season

Before the waiting truly begins there is a short window of recovery from the previous season. During this time you start making plans on Sunday nights again and your stress levels go down because you no longer spend every week worrying about your favorite character getting offed by Ramsay. This period of relaxation never lasts long, but it is as sweet as Dornish wine.

Next comes the theorizing. Let's be real, coming up with Game of Thrones theories is a constant state of being for most fans, but the activity kicks into high gear once you realize just how long it is until the next season. Hence the deluge of Jon Snow think pieces that swallowed the internet in July.

"Hey, bae? Are you ready to watch Game of Thrones yet?" This faux innocent request is actually a time honored indoctrination method. Not only do you get to relive the show through your friend, significant other, and bus stop buddy, you also are creating more people who can join you in obsessing over when the new season starts.

4. Denial Over How Far Away The New Season Is

How far away is April really? Six months? That's nothing. I mean, it's half a year, but half is less than a whole. I don't have a problem. You have a problem, and Dany agrees with me, so there.

At a certain point, every fan realizes they have to focus on something else and a new show is an excellent distraction. At least it would be if you didn't spend every minute it is on comparing it to Game of Thrones. At this point, you think every show would be improved by more dragons and Tyrion Lannister.

6. Freaking Out Over Every Tiny Clue About The New Season

This is an example of a Game of Thrones fan's thought process as new photos and plot information start trickling in: Jon Snow is alive! Jon Snow is definitely dead! Is that really Lady Stoneheart? Why are Sansa and Dany together? How is that even possible? Oh wait, that's not even a set photo — WHAT IS EVEN HAPPENING RIGHT NOW?

7. Arguing With People On The Internet Over The State Of Aliveness Of Certain Characters

No matter how certain you are that you are not the kind of person who gets into internet fights, at some point during the off season a comment on whether or not a character is definitely dead will hit you the wrong way. The next thing you know you will be shouting at your computer screen and typing in all caps to prove how wrong the other person is.

A time will come when you have no choice but to turn on HBO GO and rewatch your favorite episode. Or your nine favorite episodes. A man (or woman) cannot go too long without visiting Westeros.

The off season leaves way too much time to think, and eventually your thoughts will turn to how sweet and innocent the Stark kids were in the first episode. Then you'll remember all of the horrible things that have happened to them and cry into your pillow because everything hurts.

10. Treating The First Trailer Like The Best Gift You've Ever Gotten

The first trailer of the new season is like a miracle from all seven of the old gods. Once it premieres you will have no choice but to watch it at least 25 times in a row. How else will you be able to pick apart every scene?

Sorry bosses of the world. After waiting an entire year for new Game of Thrones it is best to accept the fact that your employees will be useless on the weekend of the premiere. The state of anticipation, contentment, and dread you feel will be with you for the next 10 weeks. That's just the Game of Thrones life.

I know some of these steps are hard to endure, but remember Game of Thrones Season 6 is coming. I promise.

More like this
George R.R. Martin Teased That ‘House Of The Dragon’ Is Inspired By The Anarchy
By Grace Wehniainen and Kadin Burnett
A TikTok Conspiracy Theory Is Doing The Rounds About Stranger Things Season 1
By El Hunt
'Bridgerton’s Jonathan Bailey & Simone Ashley Just Teased A First Look Of “Kanthony” In Season 3
By Grace Wehniainen, Alyssa Lapid and Sam Ramsden
The 'PLL: Original Sin' Creators Say A’s Identity Will Be “Very Clear” By The Season Finale
By Alyssa Lapid
Get Even More From Bustle — Sign Up For The Newsletter