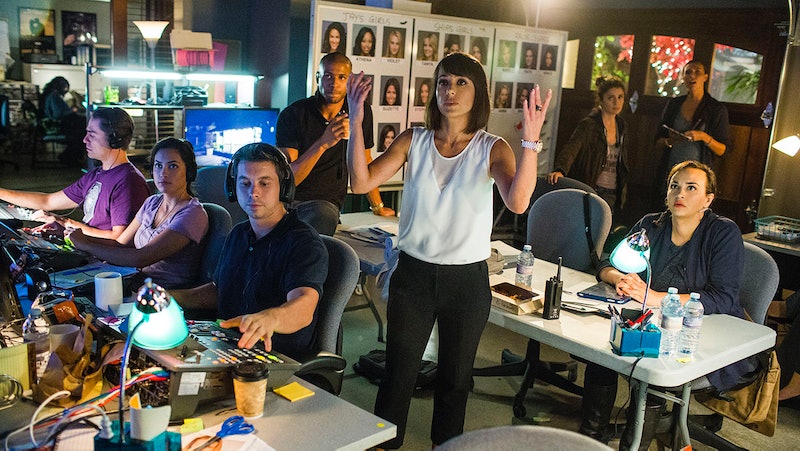 As a searing satire on reality TV, forced fairytale romances, and the fallacy of happily ever after, the first season of UnREAL was a feminist juggernaut of a show, giving audiences the complex female antiheroes of their dreams in the form of Rachel Goldberg and Quinn King. So, suffice to say, I'm beyond excited for it's return this year — even moreso after this. According to some of the details being reported about Season 2 by Deadline, UnREAL Season 2 might be tackling the men's rights movement, as well as making some clear commentary on the inherent racism within our media and culture, in general.

Speaking at Lifetime's portion of the TCA, executive producer and co-creator of UnREAL, Sarah Gertrude Shapiro, said, "We’re finding what’s edgy in the world and telling the truth to the point where we’re uncomfortable. The men’s rights movement is uncomfortable for us,” before adding that they're also including more men in the writing room this season "so as to tap the male experience."

Though the prevalent racism of contemporary television was briefly commented on within Season 1, the second season of UnREAL is making an African-American man the central bachelor of their reality-show-within-a-show in order to truly satirize Hollywood's outdated opinions on and representations of African-American people and culture; something which Shapiro noted, according to Deadline, she's more than ready to call out: "It’s appalling the things you hear about race, particularly as they come out of producers and executives’ mouths. They’re pragmatic decisions."

The possibility of UnREAL Season 2 taking on this sort of plotline brings me to wonder: Is this going to be one of the first TV shows which can finally master a narrative from an intersectional feminist perspective? Here's hoping so, because though feminism has been a key player on TV for a while now, it's often been a very white feminism with little alternative discourse otherwise.

If Season 2 of UnREAL can skillfully deliver some harsh appraisals on modern sexual politics alongside some incredibly smart, on the pulse commentary about race, then I might just have to develop an obsession for it even bigger than the one I had for Season 1. Which, I don't know, will mean I'll probably end up looking a little more Rachel Goldberg than I'd like.