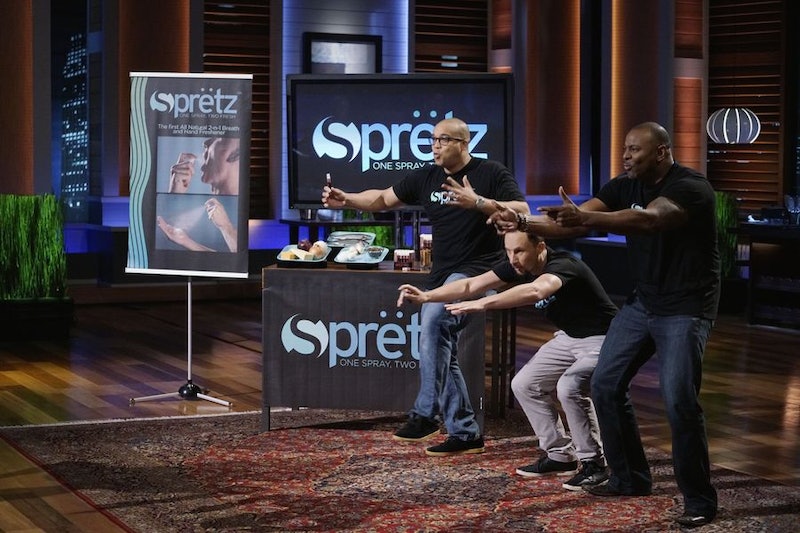 You know how in some films and TV shows you might see a guy break out some spray to freshen his breath before he smooched a lady? This move was usually for comedic effect. However, Sprëtz, one of the companies featured in Friday night's upcoming episode of Shark Tank , is the real deal. Well, it's trying to be, at least.

Sprëtz is a special kind of breath spray that I'll get into a little bit later. The concept behind Sprëtz may or may not be appealing to the Sharks when the entrepreneurs step into the Tank. However, if the above photo is any indication, they themselves look like three pretty groovy guys. I imagine it'll be an entertaining episode, even if breath spray isn't the sexiest product to ever walk through those doors.

Well, no matter what Sprëtz is, as long as it has the Sharks smelling the sweet scent of fresh dollar bills, it should do well in the Tank. I don't really see why people would buy Sprëtz over the breath-freshening products already available in stores, but the opinions of the Sharks are all that matter on Shark Tank. We'll have to wait and see if they feel like giving Sprëtz a whiff when Friday night's episode of Shark Tank airs. Until then, take in a little bit of Sprëtz now.

It's One Spray With Two Purposes

Sprëtz may look like any old breath spray on the market, but that's not all it does. The product can also be used on your hands to keep them smelling nice and fresh, too. Are there really any other body parts that need to smell good anyway? Don't answer that.

You Can Use It To Get Rid Of These Smells

OK, so I'm not really convinced that people need a spray to get rid of the odors on their hands. Using products that clean, sanitize, or moisturize hands? Sure. But just make them smell nice? I'm not really buying it. Well, for all you naysayers out there like myself, Sprëtz has come up with a few scenarios in which its two-in-one spray would come in handy over in the FAQ section of its website. These include those times when you eat some really pungent food, smoke, or have clammy or sweaty hands. I'm still not totally a believer, but those are some pretty good reasons, I suppose.

If It Smells Like It's All Natural, That's Because It Is

At least Sprëtz is 100 percent natural. "There are no chemicals, no additives and no hard to pronounce scientific ingredients," according to the FAQ section of the company's website. Indeed, you will recognize the ingredients in Sprëtz: "purified water, natural sweetener (no aspartame), flavored extract (a proprietary formula with trace amounts of alcohol)." I bet you can pronounce all of those ingredients, too.

And that's more than I can say for the actual name of the company. I totally thought it rhymed with "jets," but it turns out it's pronounced just like "spritz," as in "to spray." If that's the case, it's unclear why the company decided to use a different spelling of the word and place an umlaut over the "e," which is often found in the German language to change the pronunciation of a vowel. My guess is that the company just wanted to make its product seem fancier than it is. Wouldn't we all place umlauts over ourselves if we could?

The Founder Is A Master Communicator

Sprëtz was founded in 2012 by Tony Gauthier, who also goes by the name Victor Gauthier. While he tries to get Sprëtz off the ground, Gauthier is also currently a public information officer for the California Department of Transportation, according to his LinkedIn page. He has also worked in outreach, communications, and as a spokesperson for various agencies in recent years. Gauthier will also have some help in the Tank from Wes Osaze, a consultant to the company and former senior project manager for Intel Corporation, and Scott Hoag, the creative director and men's buyer for the Oakland, Calif. retail store SoleSpace. Clearly, Gauthier knows how to talk, but we'll have to wait and see if he knows how to sell on Shark Tank, too.

You Can Buy It Now, But You'll Have To Use It Later

Sprëtz is a new product, so it is only available for pre-order on the company's website as of now. The product only comes in a three-pack containing one Peppermint and two Cinnamint sprays for $9.99. Luckily, the orders are supposed to ship in late January 2016, so you won't have to wait long to make your breath and hands smell like Christmas.

Until then, you'll just have to stick with gum, breath mints, and soap and water to get your mouth and hands smelling fresh.