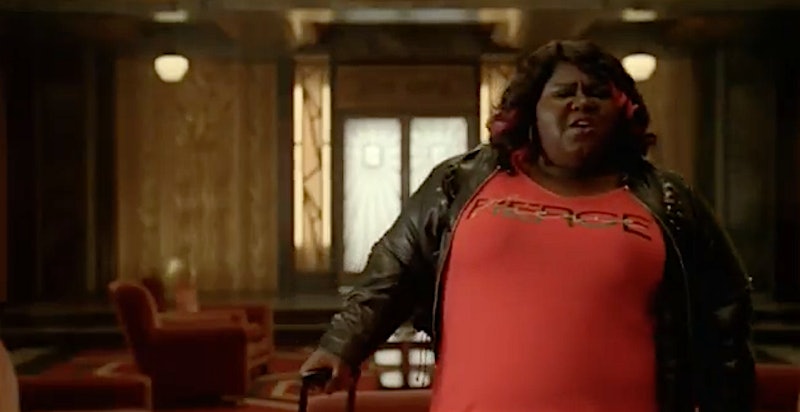 One of the great things about American Horror Story is that even when we lose the likes of Matt Bomer and Finn Wittrock (twice) throughout the course of the season, you can usually rely on some old favorites to pop up and fill the void they left behind. Which is exactly the kind of thing we saw happen on Wednesday night's episode "Battle Royale." Donovan may have finally met his maker (by his mother's hand, no less), but shortly after his tragic demise we were greeted with the return of AHS vet Gabourey Sidibe who just so happened to check into the Hotel Cortez. But not just as any old character. Gabourey Sidibe reprised her role on AHS: Hotel as Queenie from Coven !

Unfortunately, though, her cameo was very, very brief. You see, in order for Ramona to come back to life, she needed to take a life in return. So after a little vamp threatening, Iris and Liz agreed to find her a victim. Enter Queenie, who's come to Los Angeles to win big money on the Price Is Right. (The Supreme apparently did something extra special to her ticket.) But her rendezvous with Drew Carey just wasn't meant to be. Ramona made short work of paying Queenie a visit in her hotel room.

Granted, it wasn't quite as easy as Ramona expected since Queen's human voodoo doll powers made it so that every time Ramona hurt her, she felt the effects herself. (Also, was anyone else a little disappointed that she didn't make the connection of how similar Ramona and Iris looked to their Coven counterparts, Marie Laveau and Delphine LaLaurie?)

So after some epic one-liners ("I'm nobody's protein shake, b*tch!"), it looked as though Queenie was going to win. That is, until James March showed up and stabbed her in the chest. She may be a witch, after all, but he is a ghost. So since there was nowhere for the pain to go, it went back into Queenie, injuring her enough so that Ramona could finish her off. And there you have it, folks. I guess Coven had one more fatality than we ever realized. RIP Queenie, you will be missed. Again.