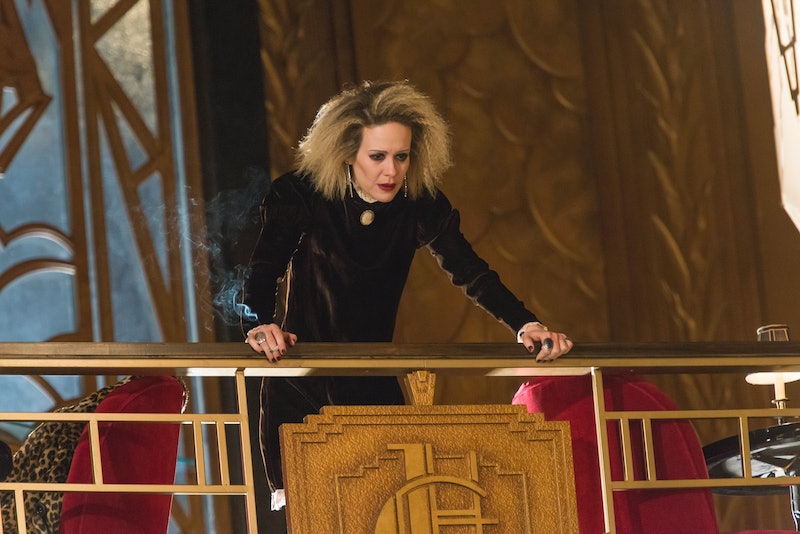 Speaking as someone who has seen some messed up things go down on American Horror Story throughout the years, I can say with absolute certainty that Hypodermic Sally's backstory on AHS: Hotel is one of the most insane things I've ever witnessed on this show. And given that I've seen firsthand what Rubber Man, Bloody Face, and Twisty are capable of, that is REALLY saying something. But I guess it kind of helps to explain how Sally got to be the way that she is? So there's that.

Basically, we flashed back to the year 1993 where Sally was working with two musicians on a song she had written. And granted, I use the term "work" loosely, considering a majority of their time together was spent in a drug-induced three-way at the Hotel Cortez (because apparently this is the only hotel anyone ever checks into in Los Angeles). Initially, things were going relatively well for the trio, that is until Sally thought it would be a fun idea to sew pieces of their skin together so that they'd always be close. That's when the real insanity started.

Both of her cohorts began to overdose on the massive amount of drugs they had ingested. And since Sally had sewn herself to them, she was powerless to stop it. (Though Mrs. Evers promised to come back and clean them up once they were officially dead. Helpful!) Apparently, she was trapped in that room for five straight days and on Day 2 our dear old friend the Addiction Demon appeared. He tortured her for three days until she ripped herself out of the stitches, which honestly looked like the opposite of a good time.

From then on, Sally kept returning to the hotel. The only place she was ever really happy (at least for a very brief moment in time). So that's why she's so adamant about John dying in the Cortez. Because even amid all the horrors that she's seen, her worst fear is ending up alone. Now, if you'll excuse me, I have to go poor bleach on my brain and forget that this disturbing scene ever happened.